Old Cassius knows every minnow and piece of flint here. He has visited the gravel bar by the St. Francis River on Junior Royer’s farm every Saturday for the last thirty years. The water flows copper-clear, and Old Cassius likes to sit and ruminate and spit chew and stare at crawdads and listen to the crane flap its wings till he can’t feel his heartbeat anymore. In the distance, a bull calls and mounts a cow. A piece of driftwood and an empty can of orange soda wind down the current, between tall blades of grass, over ripples and falls, cradled and carried away.

Today the fields are painted with goldenrod. Today he can just smell autumn. Old Cassius pulls a ripe pawpaw from his pack, splits it in half with his pocket knife, and scoops with two fingers the mango-banana custard inside.

The only fruits God likes

are in banana cream pies

even there you have to be careful.”

He does not believe in God, but he believes in holiness and holiness is a fresh tub of Crisco or the top of the Country Crock where the butter comes to a point. Holiness is the sound river, lulling and sparking his brain like a foot that has fallen asleep.

It is now, this moment — his fingers sticky with yellow flesh, his eyes still tired from sleeping pills and screen lights and coyote yips — that he sees her.

A cottonmouth swims with her diamond-shaped head high above the current. The serpent’s two-foot long body moves as one with the water, her form floating like a child’s hand undulating with the wind outside the window of a car. She finds a log and coils herself in the sun. She spots him, but he is far enough away that she still feels camouflaged. Each of them is still.

About ten years ago, Old Cassius met another water moccasin, a baby one with a yellow-tipped tail and a light pattern more closely resembling a copperhead. Then, too, he watched and was watched. He found her in an old creek bed while looking for chanterelles. He stood at the top of the ditch and looked down. He told this snake about his children, what little he knew of them: their names, the color of their eyes, the sound of their feet on the hardwood stairs below his bedroom. He spoke of his own father, a man with sun-damaged arms and a penchant for arrowheads and opioids. He shared the time he hit his wife and cried for ten days after, about how she had left, about an ancient jar of pigs’ feet in the fridge. The small snake had frozen tensely, sensing, judging.

This is the same one. Old Cassius is sure of it. She is older now, perhaps a mother herself. He wants a closer look. He lifts his tired body and wades into the river toward her. Snapping into form from his heat and movement, the snake curls tighter, opens her mouth to reveal its gauzy interior. He continues forward anyway, letting the current run higher and higher up his legs, diminishing the distance between them.

This is her greeting. She recognizes me, too, he thinks to himself. The water is thick and cold. It dizzies him as he strains against it. He has so many things to tell her. The world is all chaos

and shouting and fires.

His body is TV static.

His throat is full of days and hours

She watches him now, her eyes full of knowing. He struggles to swim forward, his feet no longer touching the rocky bottom.

He gasps and sputters as he tries to steady forward.

He wants to tell her he is all right now.

He wants to give her a name.

He wants to feel the river carry him away. 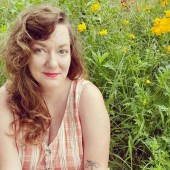 L.W. Nicholson is an educator and lifelong resident of one of the poorest towns in Missouri. Her work explores the lore and landscape of this place. She spends her time growing tomatoes, hunting for mushrooms, and petting many dogs. Her work has appeared in Pidgeonholes, Smokelong Quarterly, Moon City Review, Shirley Magazine, and others.