seen the way a heron balances

they stand in water they are trees

they could be shells carved from shale

except they tip, almost, out of kilter

stalking the face of the waters

so taken with shadows they look

tipsy with their own shadows

in love with the shallows themselves

wanting to breathe the quick minnows

heron from its height directs

off & surrounds a priest

crouches before its own shadow

it hides its stomach in

an umbrella of black wings

a comedy of hood and hunch its second

self on the water reels

its bright eyes over

after its own motion 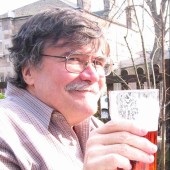 Dennis Cooley has spent most of his life on the Canadian prairies where he has been active as teacher, editor, poet, anthologist, publisher, and critic. Much of his work—Fielding, Bloody Jack, Irene, the bentleys, country music, and correction line—speak of or from or to the place. His work is a blend or regionalism and postmodernism. Recent titles: the stones (2013) and abecedarium (2014). 1. the writer Birk Sproxton in front the Heisler Hotel in Heisler, Alberta, where Robert Kroetsch grew up, and about which he wrote in Seed Catalogue.