He hugged some girls, slung an easy arm over their tank top straps, kissed them by their ears.

Are you my girl?

There were five, maybe, or six? The rest of us filed past with our backpacks, eyeing sideways.

The boys were never his girls. They cleared the hallways at the sound of his strut, spent Saturday in his detention when he caught them by their shirts.

You messing with me?

He coached track too. Had that whistle around his neck and blew it. The day I lost: me against Monique, the 100-meter dash. A tear leaked out, and I held my breath.

Don’t you cry. Nobody’s going to cry about this.

I ran on anger.

He blew his whistle.

The news broke on a Friday; they came for him after school. All weekend his was the only car in the lot. Blacktop and basketball hoops, modulars and trash cans, a chain-link fence. His burgundy sedan, a glob of bird shit white against the windshield, stuck.

It’s not that we knew because we were too young to know.

Our parents told us in our living rooms, sitting in chairs, televisions cold. It was okay to cry but we didn’t. We thought about his girls, how they sat like we sat in desks in rows, pasted magazine pages like we did into lockers.

One girl had reached into herself, dislodged a hand grenade, weighed it in her palm for one month? Two? Then threw.

While we were what? Changing into gym shorts, borrowing our first tampons, stretching our hamstrings, waiting for the sound of his whistle?

She was already running; she already knew what her body could do. 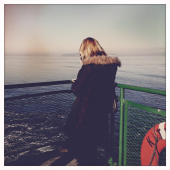 Kara Vernor’s fiction has appeared or is forthcoming in PANK, Wigleaf, Hobart (online), The Los Angeles Review, Monkeybicycle, and elsewhere. She co-hosts Get Lit, a monthly reading series in San Francisco’s North Bay.