A chorus of cicadas summarized a season. July had dried up in Prospect Park’s grass where the sweaty dogs leapt in morning off-leash hours. August had begun at last: a ripened romance between maize and meal, grapes and wine. One wants to commune with it, to dance the Three of Chalices, to dip the dry in deep and absorb. Lammas being obsolete outside of Wiccan circles, I had only the rite to remain in communion with my own grain. I meditated beyond my crown chakra; I wore that jewel ultraviolet beyond the two pencils crossed to hold the topknot in my hair–they could not draw out the grammar of my longings–and my form became a hologram. Hollowed whole. In the sprawl of fresh-faced sun shaking off its peignoir, my heart slowed and stopped, waiting for first wind.

What happened to the magician? He was still out there, mind of a geek and smile of a philanderer, out there prestidigitating, out there knowing fetish models, their onyx hair, their splayed latex legs, their sarcasms, their edges. China, New York, California, itinerant. On the fourth of July: in my own city, unannounced, now gone. This was not the way I dreamed we’d meet again, for we hadn’t, and it was supposed to be on top of a building.

It is so easy to “dig up” information about people these days.

Keep excavating behind the medicine cabinet mirror for that tiny tube, that near-empty antidote for aging. Cut it open and rub it down deep, all the way to your sternum. Count the notched bones between the breasts, always there but protruding through the skin more with time. Count down.

Accepting the vast geology of circumstances beyond my control: the maneuver itself is indigenous to slippery, rocky cliffs.

I did not think I’d ever be the person who takes whatever train comes next. I did not think that on bright Saturday mornings, only helium hope would float me from where I am to where I once wanted to be. By Barbes on 9th Street while the sun “sets” a day into pudding, there is an accordion player cornered in a claustrophobic’s car. “Nothing went according to plan. Nothing was planned.”

For some time, I was as almost as anxious about attending my own life as I was terrified I had the wrong address. Be by yourself now. They will all come back to you here. The old CDs in a stack by the window can be used as mirrors if you flip them over. They will all come back to you while you’re settled in the spider-back chair at your writing desk wondering what it is that compels someone to finish the story. 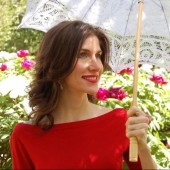 Stacy Rollins received her M.A. in Creative Writing from Florida State University in 2003 and is the author of two books. There are large deposits of poetry and prose poetry on her hard drive that appear to belong to her, as well. She enjoys planting and trimming paronomasia mazes and getting lost in them, stubbing portmanteaus, dealing in Tarot spreads and magic spellings, unplugging the circuitous, creating visual art, singing, and grating her lemony zest for life in Park Slope, Brooklyn, where she lives with her boyfriend of eight years.