How To Time an Engine A film by R.W. Perkins, written and narrated by Matt Mullins

How To Time An Engine from R.W. Perkins

Know the guts of that tin can like no one else. Go shirtless, skin sheened with oil and diesel. Duck past the coffee pot swinging from a lanyard as the pounding engines shake. Fire the pistons that turn the screws. Churn out the speed destroyers die and live by. Wring more knots out of the Edwards. Prowl the Solomon Islands on a mission to derail the Tokyo Express. Knife your ship through The Slot above the ruptured hulls of Ironbottom Sound. Barely outrun the Divine Winds and grin a tight line at the telling shock of a wing sheared off by the fantail, a Kamikaze’s fuselage slamming into your destroyer’s drowning wake. Be a salvo in the hunter-killer convoys, a warrant machinist, and no one’s father yet.

Get honorably discharged from that life. Return home to Detroit in 1945. Raise six kids after burying a wife who died too young in a car crash. In your eighties, point a sailboat into the setting sun while holding fast to a can of beer.

Never say much about the World War in your past. Keep it all below decks. Tell no one about seeing flak blossom into those questions luck asks of aim. Leave it to others to speak of the torpedo bomber, a type the Japanese called “Heavenly Mountain,” and your shipmates called a “Jill,” peeling off from her sisters “Kate” and “Betty” and keening down through the explosive sky. Leave it to others to wonder at all the synchronicities housed inside a torpedo glanced off the water. A torpedo bouncing across the waves toward a speeding destroyer with perfectly timed engines pushed near to bursting by your hand. Pull the back of that hand across your grimy brow in the roaring engine room directly beneath the ship’s twin stacks. Know those twin stacks are exactly far enough apart for a torpedo to leap over the gunwale and spin harmlessly in between. In between the story of your nearly taken life and all that will happen to you after.
– “How to Time an Engine,” from Three Ways of the Saw, the debut story collection of Matt Mullins

“The filmmaking aspect of this piece was pretty straightforward: let Matt’s words speak for themselves. As an admirer of words and how they roll off the tongue, I felt as though while reading Matt’s book Three Ways of The Saw that his words to “How To Time An Engine” were being whispered in my ear as I was reading. With that said, I felt my job was to create an aesthetic to match Matt’s wonderfully written short, which already had rhythm and motion. My approach was to try and keep it simple.” –R.W. Perkins

“I was teaching a special topics class on videopoetry and scouring the web for good examples of the genre to show my students when I came across R. W.’s “Challenge Me Vista,” on Vimeo, and was blown away. It was doing everything I thought a videopoem should do. Not only was the quality of the filmmaking fantastic, the poem itself was exceptional, one that easily could have stood alone on the page, and that’s a rare thing for videopoems, which often lack strong poems to back up their visual assertions. I struck up a correspondence with R.W., and he bought a copy of Three Ways of the Saw when it came out. He enjoyed the book, and when he approached me about collaborating on a videopoem for “How to Time an Engine,” one of the shorts in the collection, I jumped at the chance. As for the piece itself, I’ll let the words do the talking and say only that it’s about our place in a world where time and synchronicity and chance and luck and fate and purposefulness all seem to be having this eternal discussion with each other about the shape of our lives.” –Matt Mullins

About R.W. Perkins
R.W. Perkins is a poet and filmmaker from Fort Collins, Colorado. His work has been published on the Atticus Review, Moving Poems and The Huffington Post Denver. Perkins’ work has been featured at film festivals all over the world including New Belgium Brewery’s Clips of Faith Beer & Film Tour and at the ZEBRA Poetry Film Festival in Berlin, Germany.

About Matt Mullins
Matt Mullins is a writer, experimental filmmaker and mixed media artist from Muncie, Indiana. His fiction and poetry have been published in a number of literary journals including Pleiades, Mid American Review and Hunger Mountain. His debut collection of short stories, Three Ways of the Saw, was published by Atticus Books in 2012. 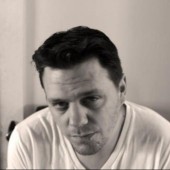