I Before E, Except After C I was finishing a bowl of paella in a cheap restaurant behind the railroad station when a guy passing in the street stopped and pressed his nose up against the window. I made a show of ignoring him but it didn’t do any good—he threw open the door and barged in anyway.

“Excuse me but you’re an American, aren’t you?”

“How did you guess?”

Without waiting to be invited he lowered himself into the seat across from me and set the envelope he had with him down on the table. He was around fifty, not too overweight for his age and dressed in a respectable blue suit. You’d have forgotten him instantly but for his eyes. Behind the lenses of his hornrims they were—slightly but perceptibly—crossed.

“The men in this country don’t wear beards.”

“Does that make you a man of this country?”

“God forbid. But listen I don’t have time for gabbing, my train’s only stopped here for ten minutes and I need a favor. I’d ask a native if I spoke the lingo. Do you know where this is?”

He pushed the envelope—an oversize manila one—toward me. There was no name scribbled on it—just an address.

“It wouldn’t take you long to walk there but your train would be gone by the time you got back.”

“I was afraid of that. Could I impose on you to deliver it? I’ll gladly pay you for your trouble.”

I’d seen this scene in the movies too many times. “How do I know it’s not contraband?”

He wasn’t offended. “I don’t blame you for being suspicious. I’ve seen this scene in the movies too many times too. You can look if you want. Go on, open it.”

When I hesitated he pinched together the ends of the metal clasp and lifted up the flap, which hadn’t been licked.

Inside was a package of boxer shorts.

I couldn’t help laughing. “You don’t have to pay me. I go by there anyway. But who do I give it to?”

“Ask for Melvin.” He rose abruptly. “He’s my idiot nephew. He’s been living here in some anarchist commune and when his mother heard I’d be passing through on business she begged me to take them. I really appreciate this.”

And he shook my hand and hurried from the restaurant.

I paid the check and followed.

The address in question proved to be a rundown loft building occupied by a fireworks importer, an adult-video distributor and several similar ventures. There was no listing for the top floor but I supposed anarchists might have reasons for preferring anonymity and I took the cramped elevator up and knocked on the door.

Melvin looked a little winded. He must have legged it from the restaurant to make sure of getting there ahead of me. The metal desk he was behind was the only piece of furniture in the room apart from his high-backed swivel chair and a wooden kitchen chair across from him. He wasn’t alone though. A second guy—bald, thick-set and also in a suit and tie—was glowering at me from the windowsill. In his right hand—pointed straight at me—was a snub-nosed revolver.

In the circumstances I could see no alternative.

“That’ll teach you two lessons,” Melvin said. “One, a compatriot isn’t more trustworthy for being encountered abroad. And two, don’t be a creature of habit. As soon as we learned you eat in the same greasy spoon every day the scenario wrote itself.”

He took a magazine out of a drawer and dropped it on the desktop. “Recognize that?”

It was the sort of literary quarterly that appears twice a year to the applause of its dozen subscribers.

“I seem to remember sending them a story six months or so ago. Naturally they’ve been too busy to get back to me.”

He reached into the drawer again, pulled out a manuscript and tossed it on top of the magazine. “Is this the story?”

My name was typed on the first page so disavowal wasn’t an option.

“You’ve come a long way just to let me know my work doesn’t meet your needs.”

“This is more than a rejection.”

He nodded at the bald guy, who got up off the windowsill and took up a position right behind me. I could tell he was right behind me because the snub nose of his gun began tracing circles on the back of my neck.

“As will hardly be news to you, a special friend of ours is coming here next week to join his local counterpart in initialing a bilateral pact.”

“I don’t know anything about that and I couldn’t care less.”

“Yes, on the evidence of this story our profilers agree you have all the earmarks of an antisocial personality. They say you could veer off into violence at any time—which is of course why you’ve attracted our interest.”

“I don’t get it. How could your—profilers even have seen the story? It’s never been printed.”

Here, the guy behind me laughed but Melvin remained deadpan.

“The magazine you sent it to happens to be published by us. Don’t scoff! Most magazines of this type are published by us or edited by individuals in our employ. Every questionable manuscript submitted to them is consequently referred to our profilers for evaluation.”

“Come on. You expect me to believe you go to the expense of financing an entire cottage industry just on the chance you’ll detect one or two nut jobs?”

Again the guy behind me laughed.

“It’s not as expensive as all that,” Melvin said, “not when you remember most of the lonely hacks we publish are paid nothing for their work. For that matter, more and more of them have even begun paying us under the guise of administrative fees and other cute little dodges. Which means that at very little cost to the taxpayer we get to keep close tabs on a sector of the population from which sociopaths are only too apt to emerge. But this is a secondary benefit. The program as a whole has a much broader purpose.”

He studied me for a moment over the top of his glasses so that his crossed eyes partly disappeared under their lids.

“In the ordinary course of events what would be the fate of a story like this? Supposing it didn’t raise any red flags, obviously one of two things would happen. Either it would be printed—signifying not that it’s good but that it conforms to our guidelines—or it would be rejected—signifying not that it’s bad but that it fails to conform to them. What’s at issue in other words is how reality is spelled out—its orthography so to speak. I trust I’m making myself clear?”

“Perfectly,” I lied. “Only in telling me all this aren’t you being a little indiscreet?”

“I could go public with the revelation.”

“You mean send it to a magazine? Say, that’s an idea. You could send it to this one.”

All at once he stood up, took a turn around the room and came to a stop in my face.

“You understand we have the authority—forget about due process—to detain you indefinitely. We can even make you vanish for good if we decide it’s in the national interest. But after looking you over I think the profilers got it wrong. I think he’s no threat to anybody—wouldn’t you agree, Fred?”

In lieu of replying Fred dug the gun into the back of my neck and pulled the trigger.

“It’ll be loaded next time if you don’t keep your nose clean. Go on, get out of here. Go home to your marginal life.”

I was at the door before I realized I still had his envelope.

“That’s all right, keep it,” he said when I tried to give it back. “We got them specially for you. I hope they fit. We figured you’d be needing a change of underwear about now.” 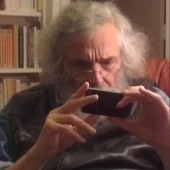 Stephen Baily's stories have appeared recently in Squawk Back, Northwind Magazine, and Exiles Magazine. His novel, Markus Klyner, MD, FBI, is available from amazon.com as a Kindle e-book. Poems of his can be found on barefootmuse.com  and contemporaryrhyme.com. He's also the author of seven plays.