I jump down from my soapbox I jump down from my soapbox
like Jay Bennett leaping off his Marshall stack
at the Titanic Love Affair show at Treno’s pizza,
the one where Matt Pearson went up on stage between sets
and chugged two full pitchers of Leinenkugel,
then lay slumped across a rickety table the rest of the night,
even when Jay turned up his amp so loud
the black walls billowed. The one where Rachel looked
so sullen and amazing in her silver skirt
it took three pints before I got the nerve to yell
something in her ear.

Treno’s is long gone. Rachel went and disappeared
into the South. Jay lies dead in his apartment
and I’m back in the Midwest, walking
by the county courthouse on a Sunday,
where the only sign of life is a pair of cardinals
shuddering in a maple like the bloodshot eyes of a lunatic.

The sky is a massive hole
over Democratic headquarters and I wonder
who would want to be the mayor of this shitty town.

Better than the undersecretary of some imagined past,

answers my inner enemy, but I don’t have to listen
to that voice today. I climb up with the birds
and find Jay perched there
blasting out the riff from “Only in the Past” on his Telecaster,
and Rachel shows up to kiss me hard on the mouth,
for old times’ sake we both agree, and Eddie Schaler’s dirty van
comes screeching around the corner and when the doors
fly open, Matt, and Ken jump out with Cindy, the drummer from Milo,
on whom I had such a terrible crush, and Tim Kauffman in his dirty dreads,
and my old girlfriend Monica who gives Rachel that Baltic stare

she used to throw at me sometimes,
and a grinning Eric Appleton,
The Master and the Margarita tucked under his wing.
We’re all sitting on branches and someone shouts,

Screw Jeff Tweedy, who cares if he’s a genius!

and we all look at Jay and laugh, but he just kills it
like he always did, throwing back his nest of hair.
Nothing’s changed since 1992,
and none of us give a damn if we live forever. 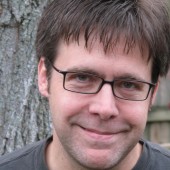 Mark Neely is the author of Beasts of the Hill (winner of the FIELD Poetry Prize) and Dirty Bomb, both from Oberlin College Press. He has received a Creative Writing Fellowship from the National Endowment for the Arts and an Indiana Individual Artist’s Grant, and his poems have appeared in Gulf Coast, Indiana Review, Boulevard, Willow Springs and elsewhere. He teaches at Ball State University in Muncie, Indiana.