If Karen Russell Had a Fan Club, I’d Be Its President Etiquette schooled wolves, gator-riding girls, and pensive vampires are the beings that animate Russell’s stories. In October 2013 the author read at Butler University.

The diminutive 32 year-old, a Floridian, looked slightly out of place smack dab in the land of cornfields and basketball fans, far away from mangroves and manatees. Ms. Russell tried to adapt to her new surroundings. Her first words were, “My friend told me to mention Brad Nelson!” A voice from the crowd called out It’s Brad Stevens, referring to the coach the Boston Celtics recruited from Butler. Russell laughed at her flub. A native of Coral Gables, she commented on the setting of many of her stories—South Florida. “It has the capacity to envelop a big mix of weirdos.” She remembers her childhood town like this: “There’s an apocalyptic storm in the morning; then it’s time to go to school!”

Visiting writers almost always read from their newest work, but Russell dialed back the clock and read from her first book, “St. Lucy’s Home for Girls Raised by Wolves.” She wanted to entertain us with her “wolf voice.” This proved problematic; when the time came to summon her inner lupine, she couldn’t muster the gumption. After a pause she goodnaturedly berated herself for her inhibition. As Russell continued her intonation finally descended to an endearing, grumbly bass. Upon reaching the end of the story she flashed a great smile and laughed, saying that she’s always constrained by a “hideous self-consciousness.”

“The truest stories I know to tell are best told through the register of magic, using fantastical elements,” said the author. Russell tried to explain how she came to her unique literary style, which some have described as gothic. Drawn to horror and suspense since she was a girl, Ms. Russell said that if she went to the library for Stephen King’s “Cujo,” her mother made sure she also checked out something like “To the Lighthouse.” Russell may or may not have appreciated her mother’s attention to her literary education—she didn’t say—but it’s interesting that the author is drawn to write about unsupervised youth. “I often write about kids under the care of inept adults, kids who exist in this lush pocket of neglect.”

Halfway through a draft, you hope you find something genuine,” said Russell when describing her writing process. “But when something in a story comes alive too soon a story can become wooden.” If this happens the author said she’ll often go back to the drawing board so the story remains flexible and elastic.

“Swamplandia!”, nominated for the Orange Prize for Fiction and a New York Times Best Book of the Year, both in 2011, began as a 40-page story. In the novel, Ava Bigtree, a girl born into a family of alligator wrestlers, embarks on a quest to find her missing sister. Russell said that expanding the story into a novel was more difficult than she’d expected. The book seemed to have an unstoppable, lush growth with which the author wrestled. Even so, Russell said, “A book is not a cauldron that can contain everything. It wasn’t a just-add-water formula.”

Writing “Swamplandia!” took over three years. Russell said that by the time she finished she felt like the Tim Robbins’ character in Shawshank Redemption as he escaped from prison through a sewer pipe into a thunderstorm, reaching his muck-covered hands skyward in a silent Hallelujah! Karen Russell’s experience writing the longer work seemed almost as perilous as Ava’s quest to find her sister. She said, “Writing a novel is like playing Jenga.”

If I was president of Russell’s fan club I’d make The Graveless Doll of Eric Mutis, the last story from her newest collection, “Vampires in the Lemon Grove,”the official club story. Set in a park in New Jersey, the plot is narrated by Larry Rubio, the leader of a group of teenage boys who have bullied a boy named Eric. “I like the cognition of adolescents,” Russell said. “They’re trying to make sense of the world. It’s interesting to think about the deep seas you have to swim through to become a self.”

A shadow of a kid, Eric Mutis showed up in class one day unannounced. He was quiet, an easy target. “I love to write about unchaperoned kids,” said Russell. “I was a camp counselor and thought it was fascinating how kids were nice individually but can collectively abdicate responsibility and become a Voltron Monster.”

One day Rubio realized Eric hadn’t been in school for a while, that he had moved away. “Life always presents people like Eric,” said Russell. “They appear, you have a glancing contact with them, and then you never see them again.” In the park Rubio and his gang found a scarecrow that looks just like Eric. “Scarecrows are like doppelganger dolls,” Russell said, laughing in mock horror. “They’re terrifying. Do we have to dress them in Dad’s clothes? Do they have to smile?”

“I write from the perspective of an adult who is reinhabiting a childhood space,” said Russell when she was asked if she thinks her target audience is young adults. “I like to plug into a deep reservoir of familiarity and play with people’s expectations.”

All Karen Russell stories upend the expected, but The Graveless Doll of Eric Mutis is the one I can’t shake. My heart breaks for Eric, ever-hopeful yet so meek he seems almost translucent. Larry Rubio’s cruelty makes me quake, even as I see his tender underside. “I write stories that tell the truth in a different register as a way to come at serious issues from the side,” said Russell about this narrative of guilt and atonement. Eric and Larry are rendered so honestly that every time I read their tale I’m shocked, as if I’ve been plunged into icy water.

At the end of her talk Ms. Russell, recent recipient of a MacArthur Fellowship (also known as the Genius Grant), was asked if she was well-versed in literary theory. She admitted she was not. “After my first book came out,” she said, “someone told me I was a fabulist, but I didn’t know what that meant. I thought they were saying I was fabulous.” She is. 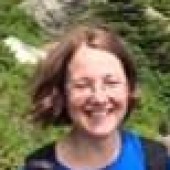 Susan Lerner is a student in Butler's MFA in Creative Writing program. Her work is forthcoming or has appeared in Word Riot, Monkeybicycle, Bluestem, The Believer Logger, and Literary Mama. Susan lives in Indianapolis with her husband, three teenagers, and dog, Mischief. In her spare time she posts book reviews at http://booklerner.blogspot.com