In the Dog Park In the far corner of the park, against the northernmost border of the fence, a malamute raises its black and white head and howls, mournfully, at a squirrel perched high in the tree above.

“Artie! Here, boy!” shouts Wayne, cupping his hands to his mouth to get the sound to carry. The damn dog with the one thing on its mind all the time. Never other dogs. Never balls. Never Wayne. Always squirrels. Always their tails just out of reach. He shouts the dog’s name again to bring him closer. The dog remains below the tree, paws pressed up against its trunk. Wayne squints to see him better, but instead senses Molly looking at him. From the corner of his eye, sees her purse her lips. Wayne shrugs and points to Artie sitting below the distant tree. They come here to distract themselves, and he abandons.

“He’s a dog,” says Molly. She makes as if to touch Wayne’s shoulder, to comfort him, but thinks better of it, folds her arms against her chest. “He’s just being a dog, Wayne.” See the dog pursue its dream of squirrels and what then? Pursue enough squirrels and you’re bound to get one. Little body dangling from the teeth. Like Wayne dangles Molly or, really, Molly dangles Wayne. Maybe I do. Maybe I don’t. Molly frowns. How was she to know what was coming, what to expect. The bended knee. Molly looks at Wayne, his eyebrows furrowed now like sheepdogs. A tall man in a baseball cap stands nearby. He points at Artie, grins.

“Your guy there sure loves the squirrels. What is that, a husky? Looks like one of them but on the smaller side, yeah?” Steve removes his ball cap, pats down the thin patch of greasy hairs, then replaces the cap. He puts a hand to the hat’s brim and squints toward the dog in the park’s far corner. The young couple stand near him dumbly and look at his Daisy and nod. “My Daisy is one of the laziest dogs I’ve ever seen. A squirrel could jump right on her butt and she’d probably just roll over on her belly and take a nap. Isn’t that right, girl, isn’t that right?”

Daisy flops into a patch of dirt. There is a half-hearted rolling before a final flop. The tongue lolls.

“He’s a malamute. Mostly, we think, probably something else in there,” says Molly. The tall man nods, leans in eagerly. Stands closer now. Hands in his pockets. She notices a stain on his jeans, several stains, yellow, maybe mustard.

Wayne bends down and pets Daisy. A dalmatian bounds past. A boy chases it. “And what’s she?” He rubs Daisy’s ear. Her belly wiggles, the rows of nipples protrude. In the distance, Artie whines at the tree. Wayne can hear the whine, but he can’t see the dog. The Dalmatian runs past. The boy follows. An orange nerf ball just misses Molly. She raises one leg off the ground, balancing. The raised leg is beautiful. Wayne wants to kiss the knee pit, drop to his knees and kiss the pit of her knee. But he won’t, can’t. Not again. Not after—

“My wife says she’s a silver lab, but I tell her there’s no such thing as a silver lab. But my wife, no, that’s what she wants a silver lab, so we get one. One of her pool clients gave her to us, one of these people, you know, the dog’s purebred. But Daisy doesn’t know it. She’s just my lazy Daisy.” Hat removed; hat replaced. The wife wants a purebred, the wife gets one. Long as the cooler is filled, and the garage is clean. The chair there, just so. The television there, just so. The game on, the Mercedes parked. There was a time when things mattered, but now just so, just so. I can’t take your talk talk talk, the wife says. Queen of the above ground pool. “Daisy is lazy, all right. Maybe that’s what that pure breeding gets you.” Steve laughs at his own joke. Wayne and Molly smile politely.

Wayne tries to catch Molly’s eye, but she’s staring at the man, his jeans, his mouth moving and moving. Ring in the pocket and Wayne, earlier, kneeling on the front porch, Molly? And head shaking, it’s too soon, how do we know it’s right? And Wayne, knee unbending, stomach dropping, Artie in the front window, whining to be let out, to join them. Wayne raises a hand to his forehead to shield his eyes from the sun. He looks at Molly. She’s looking at Daisy. Daisy waddles to the nearest tree and drops back to the dirt. The dirt rises in a cloud of dust.

“We got Artie from the shelter, so they said malamute, but you never know.” Molly shrugs. You never know. How long do you let someone dangle before you have to let go? Or you trust yourself and settle down, end up happy, barking at the same squirrels. Or you end up lonely, talking to air, smeared in mustard. Lazy.

“Yep, that’s Rolf. He’ll just sit for hours eating the pecans. Taught my other one—over there, the chow, Angie—to do it, too. You should see our yard. Dogs just munch munching.”

Wayne and Molly and the man turn to see a red-haired woman in yoga pants and a white visor squatting beside a golden retriever. Wayne nods, Molly nods. The golden retriever chomps on the nuts. In the far corner of the park, Artie howls.

“My Daisy never touches the nuts. Probably the lazy in her. I tell you, you never saw yourself a lazier dog than Daisy.” And the wife says, Steve, like dog, like master, and go drink another beer, honey and find someone to talk to because I’m busy, honey, and I’m smiling honey and I’m frowning honey, but you can’t see because of the Botox, honey. Lazy dog, lazy man. But the antenna, just so. The game on, just so. Three, five, nine beers in the cooler. Koozie, just so. And people. My people. King of the dog park, Queen of the above ground pool.

“Artie’s never tried to eat a nut before, but I think there’s a pecan tree in our backyard,” Wayne says, smiling at the red-haired lady who isn’t looking at them but squatting, petting the dogs and the dogs are chomping, and so Wayne looks at the tall guy, owner of the Lazy Daisy, whose mouth hangs open when he isn’t speaking. Like even when he isn’t speaking he wants to be. Wayne glances at Molly and he catches her eye and she smiles at him and he doesn’t know what the smile means.

“I don’t think I realized that they were pecans,” says Molly.

“Oh yeah, there are pecan trees all over around here. We got a pool in the backyard, my wife, she designs them, and the nuts are falling in all the time. I say, Daisy, go get them nuts, but that Daisy’s lazy. Oh man. She is one lazy dog.” Steve squats, pets the dog, the dog rolls around. Eyes glazed. Breeding pure.

In the car, on the way to the dog park, Molly, staring out the window, the same trees, the same leaves. And then to Wayne, you really want this? You’re sure? Wayne shakes his head, won’t look at her, You’re not? In the backseat, Artie whines. Wayne to Artie, you know what you want, boy. Molly doesn’t answer. Molly doesn’t know. She smiles at the tall man. Maybe he’s not lonely, maybe she is.

In the far distance, across the dog park, a squirrel has leapt from the fence to the treetop and fallen. He runs, Artie pursues. The squirrel runs toward them. Tail upright. Small gray blur blurring. Approaches. Artie lunges, pounds the dry yellowing grass, his strides overtake the tiny animal. Artie seizes the creature in his mouth. There is no sound beyond the paws thumping the dirt. Then Artie is slowing, trotting, shaking the body, now beside Wayne and Molly. He shakes the squirrel’s body back and forth then drops it to the dirt at Molly’s feet. A smallish drop of blood oozes from the animal’s neck. Its eyes are black glass. Daisy ambles toward the carcass and sniffs once, twice. Then sniffs Artie. The tails wag.

“Well, shit. Now it’s your turn, Daisy.” Steve repositions the cap. Grins. Daisy’s a pacifist. Yeah, she’s a gentle girl. Tell the Queen that one. “I know, girl, I know. You’re a pacifist.” Steve laughs and the others smile.

“I think we should go.” Molly looks at Wayne. His hands hanging limply by his sides. She likes those hands. Kind, familiar hands. The tall man smiles at her, then at Wayne, shakes his head. She wonders if he knows her thoughts, though of course he can’t.

“He doesn’t even want it now that it’s dead.” Wayne points at the squirrel. Artie’s tail wags. Then he sits back and whines. The sound is plaintive. Primal. Molly toes the squirrel’s body with her shoe. Wayne catches her eye. Watches a pecan fall by her feet. She smiles at him, nods her head. He looks away, out over the green of the park, to the far corner, to the tree, a squirrel perched on its highest branch. Chirping wildly. 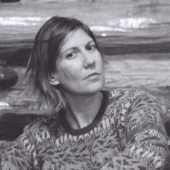 Rebecca Bernard is a PhD candidate in creative writing at the University of North Texas where she serves as Managing Editor for American Literary Review. Her work has appeared or is forthcoming in Colorado Review, Southwest Review, Hotel Amerika, Meridian and elsewhere. Her work received notable mention in the Best American Short Stories of 2018.