In his first book, a collection of stories entitled Repairable Men, John Carr Walker illustrates what sometimes happens to decent men in our culture: trying hard to be manly, to meet others’ expectations, they watch their integrity dissolve in a soup of hard times and daily pressures. Are they repairable?

In “Ain’t It Pretty,” for example, a raisin farmer whose harvest sits rotting in unseasonable rain calls his feckless younger brother home. Drew, the elder, wants Reg, the younger, to dispatch their late mother’s elderly Pomerian, whom Drew despises but does not want to kill himself. What Drew truly needs is company. His frustrations have already led him to violence, pushing his wife and son to leave him and pulling him apart in the process. “I can . . . bring them home to live with a complete man, if only Reg will stay awhile, short-circuit me enough so I can be rewired.”

In “Pups,” the narrator, Mollie, must cope with the ever-stranger avocations of her accountant husband, Barry. His new, outdoor phase has led him to bring two wolf puppies home to raise. He immediately leaves them in Mollie’s care while he goes fishing. Her marriage is already bankrupt and she’s afraid the wolves will grow up to kill her, so she disguises herself as Barry and taunts the animals, hoping they’ll turn on him instead.

In “Grandeur,” a Fresno man’s job is to collect dead birds and deliver them to a lab that screens for West Nile virus, in order to stop it before it spreads to humans. So far the lab has failed to find the virus in the birds, disappointing the narrator. “The imminence of disease spreading through the air turns us on. Our careers—our lives—had meaning, hard work and dedication about to be recognized,” but he is learning “how to be patient with a disease that refused to make its grand entrance.” When the narrator finds “clustered specimens,” a pile of bird bones, in the walls of his own house, his patience fails, and he begins to feel the presence of a flapping, dying bird in his own chest. “Grandeur” shows us how a man can hope for personal heroism even if it costs the end of the world.

These stories are written with skill and the images are clear and suggestive. In “Sword of My Country,” a fifteen-year-old girl, Amelia, desperate to avoid her parents at a party, stares into a fishpond: ”I watched the fish cut swift lines in the motionless water and my reflection peered back. Koi swam through my eyes, in and out my ears, breeched my mouth. When I pictured what my life would have been like in Vietnam, if I’d never been adopted, this is what I see: my face rippled in the water, flat sky above, empty country on all sides.” To deepen the meaning of his stories, and, I suppose, to broaden what we take away from them, Walker carefully includes parallel events but leaves recognizing them to the reader. The loss of Amelia’s home country, for example, is set against petty theft by an underpaid employee at a hardware store. We wonder what kind of deal has been struck by the store’s owner, a former combatant in Vietnam who is suspiciously fond of Amelia, and her adoptive father, his manager.

All of the ten stories in this book extended my compassion and showed me what good writing is. Don’t fail to read it. 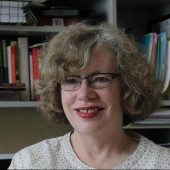 Jo Ann Heydron lives in Bellingham, Washington. Her latest short story, “Frankie at Fort Lewis,” will appear in the Winter 2015 issue of the North American Review. She blogs at introverthitsthestreets.blogspot.com.