Regret sounds like a rubber band pulled taught, then snapped.  Sara holds her breath, what they say not to do.  Her leg sweats against the plastic chair.  The goggled doc scrolls the laser across her anklebone, following an artist’s line.

She wanted a Kudzu vine, emerging from toes and wrapping her foot.  Drew missed the South, so they moved down here from Boston, where they happened to meet.  Sara has a habit of rearranging her life, not always for men.

Early on, they canoed the lazy Chattahoochee.  The Kudzu-wrapped riverbanks seemed to shift, vines squeaking as they passed over one another, knots tightening beneath.  New shoots extended with a pop, then burrowed taproots into clay.  Native life smothered, inch by inch.

When Drew leaves for work, Kudzu taps at the window.  By lunchtime, a vine fingers its way in through a gap where the glass sits crooked.  At sunset, Sara dons gloves and steps into mosquito clouds.  Cicadas perform their shimmering swell, males vibrating their ribbed abdominals while females crouch and click.  In this lusty humidity, Sara chops.  She draws herbicide across the windowsill.  But it only delays the inevitable.  Vines thicken, turn hard.

Southern air is bloated, Sara thinks, with words withheld for the sake of manners.  Drew warned her: “No politics, no religion.”  But she isn’t good at small talk.  Her only friends are his, but she did try—She chose this tattoo, didn’t she?

Beneath the laser, her skin boils and the design blanches, becomes its negative.  Regret feels like a dull blade thumped into her, withdrawn and thumped again.

This doc usually deals in warts, moles, and pustules.  “Skin is an organ,” he says, above the noise of the machine.  “It deserves respect.”  He tells her what will happen: A watery blister will balloon from skin burnt raw.  The pain will become an itch.

She’s leaving, of course.  Drew and the South.  She does tend to hold a grudge.

Her regret bubbles up with ink, poked in deep by another man she trusted too soon, without good reason.

Most of the ink will be reabsorbed by her body, the doc says, eventually pushed out as waste.  But first it will travel her bloody canals, regret flooding her, seeping through cell walls, into marrow.

“This green,” the doc frets, pushing a button to stop the machine.  Silence booms.  “It’s tough.  But I can lighten it, at least.  Make it easier to hide.”

Sara’s not sure yet if she’ll head back North or somewhere new.  She’s not sure how life will rearrange this time, or what deserves to leave a mark.  Not Kudzu—she’s learned this much.  Kudzu is no emblem of the South.  It’s an invasive species.  It won’t coexist with what belongs here.  Like her, but more determined.

From now on she’ll heed the doc’s advice, show some respect.

He hands her a different pair of goggles and switches frequencies.  And although it only makes it worse, once again she holds her breath. 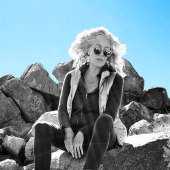 Susan Rukeyser had laser tattoo removal and, yes, it’s that bad. Her current home is the American South but she’s only half-American and not particularly Southern. She earned her MA in Creative Writing from Lancaster University, UK. She’s the author of the as-yet-unpublished novel Not On Fire, Only Dying. Her short work appears in PANK, Eclectic Flash, Short, Fast and Deadly, Ink, Sweat and Tears and others. She does her best to explain herself at susanrukeyser.com.