It’s Not About Winning: A Review of the Garden of Good and Evil Pancakes by David S. Atkinson

The Garden of Good and Evil Pancakes What better way to suggest the futility of the human experience than with a card game called Armistice? This game is not War, it is Armistice. Because, as the narrator of The Garden of Good and Evil Pancakes by David S. Atkinson explains, “Battles have costs. Even the winner of a battle is a loser in some way, at least most of the time.” Armistice, like life, is a game that proves there is no winning. Not even in victory.

There’s no point in going over the rules of this absurd game. It’s merely a pastime, yet another vehicle for yet another conversation between three people stuck in a booth, interminably, in a diner called the Village Inn. There’s the plot of The Garden of Good and Evil Pancakes, summed up in a card game nobody can win.

What Atkinson does well with this setup is to create humor through juxtaposition of the absurd and the mundane. Each of his set pieces—conversations, games, and observations between narrator Cassandra, Cassandra’s ex-boyfriend Thomas, and Thomas’ girlfriend Kate (also Cassandra’s former best friend)—ends on a sweet little twist, as when Thomas unconsciously stacks plastic coffee creamers on the table (the mundane). Cassandra and Kate join in, but soon find themselves bickering over construction techniques, about whether it’s more important to create a design that’s stable or to create something that’s aesthetically pleasing (the absurd). They bicker over whether they’re building a bridge or a tower. And only from the din of this tempest in a teapot does Thomas become aware of the mundane activity he’s been undertaking. “I hadn’t really thought of it as anything,” he says. “I guess I didn’t care what it was. I was just building.” In the end, of course, he sides with his current girlfriend.

The novel has moments of humor at its blackest. Take the waitress, Sherri, who has a connection problem. She literally suffers from a disease in which her body’s molecules fail to come fully into contact with the molecules of others. This disease that bars her from connecting causes her to cling. Joseph Heller himself couldn’t have played it better. “She felt desperately and tragically alone. She felt a burning need for that connection, even though she had no idea what it was… It caused her to cling, without being able to touch. As a result, she drove people away.”

At the outset, for example, our time-bound ménage à trois challenge each other to describe Village Inn breakfast options as if the meals were souls stuck in Purgatory. It isn’t necessary to fully grasp every nuance of the conversation, but readers will soon see they are describing each other and each other’s shortcomings. Hint: Thomas is Eggs Benedict, scorned by reputation as a traitorous ex-boyfriend now dating his former girlfriend’s best friend; the ex-best friend is the Garden Skillet, not quite complete without Thomas (or, one can presume, any other male, regardless of whose boyfriend she steals next); and Cassandra, poor narrator, gets dished the worst as Steak and Eggs. It doesn’t sound so bad, until Kate tells Cassandra, “The eggs could never accept that her and the steak weren’t a package deal. They need to separate, let the steak move on, but the eggs can’t do that.”

It’s clever enough, but the problem with the narrative device in this instance is with the timing. It’s the opening sequence, and the story has yet to provide enough context for readers to have any connection with the characters, to understand them as individuals, let alone puzzle through who is who and how their shortcomings might be seen as breakfast fodder. However cleverly done, this opening conversation, and others like it, occurs in a vacuum. Nothing’s at stake. The characters never gain enough of a life to lift the exercise above the merely clever into something bearing purpose. What the book could use is a visit from King Solomon to solve the problem of who gets the Dachshund formerly shared by Cassandra and Thomas: threaten to cut the dog in half and see who truly loves it. Let’s have a little bloodshed. A little life. A little death.

Waiting for Godot is brilliant at about 12,000 words; The Garden of Good and Evil Pancakes is wearying at about 65,000. That no progress is made may serve a philosophical view of the human condition, but it makes for slow reading over the course of a novel. On the one hand Atkinson accomplishes an admirable feat in writing a book comparable to Beckett’s work. On the other hand, reading The Garden of Good and Evil Pancakes begins to feel similar to how Cassandra describes their game of Name-That-Purgatoried-Breakfast-Food: “It isn’t about winning. It’s about Purgatory.” 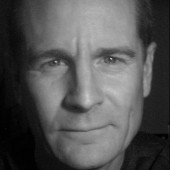 Ben East served as a Peace Corps Volunteer in Malawi before taking up various teaching and diplomatic assignments in West Africa, the Middle East, and throughout the Americas. A native of Connecticut, he lives in Mexico City working on a satire of diplomacy for the War on Terror. His work has appeared in The Foreign Service Journal and is forthcoming from Umbrella Factory Magazine. "Guts" is his fiction debut.