Terry Mary’s cousin visited Makurdi one holiday and caused the jinx. We were twelve, maybe thirteen, perched on a branch of some leafy tree, casing the cashew orchard across the glinting train tracks, hoping some of the unripe fruits would somehow ripen and drop while we were there. Terry Mary jumped off the branch and went all smiley like he’d just kissed Lawande Gyado.

“Ol’ boy Enasni, my cousin don land,” he said. Then he pitched his voice higher and put on a stupid accent. “Mehn, Jay, is that you? How’s Queen Elizabeth and London City?”

Besides the punk haircut, Jay made himself easy not to like the moment he opened his mouth.

“Yer mum said I’ll find you lazing here,” he said, as if we were on deck chairs by a fancy swimming pool checking out cute girls in bikinis instead of stalking the back of Hudco Quarters, surrounded by the same gravelly earth spread all over Makurdi.

I’d known Terry Mary—short for Terlumu Mvendaga—this side of forever, and I didn’t understand what he saw in his bulldog-faced cousin to get so excited about. Why did being born and raised in London make him so special? Jay kept bouncing along like some Big Bad Gangster in his baggy jeans. Terry Mary toadied beside him, asking about guys they’d known in Britain, years back. I snorted and ambled two steps behind.

Hudco Quarters ranked among the best places to live in Makurdi. The flats were modern with open spaces out front where our civil-servant fathers parked their Peugeot 504s. We lounged beside my father’s car, licking our lips as Lawande Gyado rolled her over-sexy ass past us. We gawked at her until she stopped at the shoe shiner’s spot.

Terry Mary and I nodded.

Lawande already broke our hearts so often it felt like a break-dance inside our chests whenever she came around. Though barely sixteen, only movie sirens threatened her status as a living, breathing goddess. And even though word around Hudco had her doing the games master of her school, we still wanted her. Terry Mary and I regularly sparred over who should take the first shot. So when she stopped by us on her return trip and pointedly asked Jay the time, Terry Mary and I dropped our jaws. I wondered if she’d fallen for the punk already.

Jay said, “It’s a quarter to I-wanna-suck-your-tits,” and pouted in readiness.

Lawande gave him the once-over. “You need Jesus.” She swung her hips as she left.

Thrilled at how Jay had knocked himself out of contention, I smiled at Lawande’s back. But then it occurred to me that his rudeness might have knocked me out, too.

I glared at him. “Yeye London boy! You don craze, abi?”

Terry Mary nodded. I didn’t. But I’d never lived in London. I bit back my lip and planned a letter: Dear Lawande, sorry about Jay’s rudeness. I care about you so much and…

The next day, I followed Lawande into the corner store and held out the folded note.

She hesitated before taking the letter. I stood back and watched her leave. She went like seven or so steps, stopped and looked back at me and did something I’ve never forgotten. And I blame that foul-mouthed London show-off for making her my first one-that-got-away.

These days, whenever I bring up Jay’s rudeness, Terry Mary brushes it off as just another teenage fuckup. Nonsense. Liar knows damn well it went beyond that.

Before Jay came along, we used to at least smile at each other—Lawande and me. Sometimes I would give her a certain look and she’d get it and give me a certain look back. We never really talked, but I knew in my heart we had a telepathy thing going on. One Sunday, we bumped into each other at the back of the church as we snuck outside before the boring sermon started. We both said, sorry, sorry, and sat quietly together for a while. Then she cocked her head and said, “You know, Enasni, for a guy, you’re okay.”

Lawande still shows up in my dreams—smooth oval face, dreamy eyes, plump lips and her round ass that rolled so erotically when she walked. If I had scored with Lawande, I would have been Don Juan—not only of Hudco Quarters, but maybe all of Makurdi. No doubt I’d be luckier with the ladies now. Terry Mary says I’m misremembering things and dreaming in retrospect, but he can’t deny his cousin jinxed us.

After Jay insulted Lawande, he said he’d brought something unbeatable from London to show us. I’ve no idea how I stopped myself from punching the pompous punk.

We went deep into the cashew orchard—the only private place we accessed at will. From one of his jeans pockets, Jay pulled out a crumpled magazine. Can’t remember the name, but I do remember how some naked beauties smiled up at us right from the front page and how I got as shiny-eyed as Terry Mary. And I remember the unbendable rigidity of our woods that steamy afternoon in the orchard, and how the tugging that followed engendered an intense fever of goodness, so much goodness that a vision of a winged Lawande wearing only panties smiled down on me before I exploded and shook with contentment.

What’s left of those days? Crazy know-it-all Jay bounced back to London before the holidays were over, leaving bad luck behind him. Our little pleasure orchard got infested by some locust-borne disease, the trees withered away, and a shady developer with political ties snagged the plot and built a brothel there. That’s where Terry Mary and I lost our cherries to some three-bucks-a-round ashawos. A while later, Terry Mary went off to the US, kicked around doing god-knows-what and came back bragging about all the hot women he’d had.

Now we hang out together here in Abuja most weekends but there are never any women around him, let alone hot ones. And we often end up talking about Lawande.

“I bet you she still dey Makurdi,” he said once. “She be fat round housewife running after six kids and pounding yam for her fat round husband who dey always pound her too.”

I couldn’t help chuckling. “You be bad guy,” I said. “Me, I think she still dey single with her fine shape. You know all these fine-fine girls no dey marry quick. She dey wait for guy wey don already find Jesus to come find her.”

“Well,” Terry Mary shook a finger in my face, “that no be you, my guy. In any case, twenty years don do for you to forget Lawande or na only ashawo you go always dey bang.”

“Since you be number one ashawo customer, you know from experience, abi?” I asked, right before I drifted off into a familiar daydream. Once again Lawande stopped, turned and stared at me. A soft smile parted her lips. She looked so lovable, so unforgettable as she scrunched up my letter and flicked it away, unread. 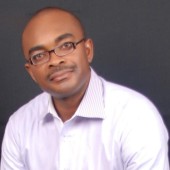 Crispin’s fiction appears in various publications in print and online. Several of his stories have received finalist, notable, and honourable mentions in contests including the 2012 Walker Percy Prize in Short Fiction, a 2012 Glimmer Train contest, two Narrative contests, two Million Writers awards, and the 2006 Best of the Net. A former taxi driver, journalist, and banker, Crispin won the IRN-Africa Outstanding Award in Creative Writing in 2008.