Sally is sitting on the couch telling the story of Jésus and Estella, the next-door easterly neighbors, to the red-Volkswagon girls, Amanda and Jenny. I guess this is what you’d call a coffee klatch without the coffee. I’m eavesdropping. I usually do. Sally is relating how Jésus showed back up from Mexico one day with his wife and five kids. He was supposedly dying and he wanted to bring them here from Mexico.

Jésus introduced them all to Estella, his second wife, who was apparently without benefit of a first divorce. Yeah, Jésus has got huevos, in more ways than one, no doubt. No doubt about it! Anyway, with such a simple benevolent act, he sealed off both marriage beds forever. The wife with five kids returned south. Estella returned indoors. Jésus, who probably thought he had done the best he could, just didn’t die.

He now spends his days sitting in a plastic, patio chair outside the open garage door. He watches the women and young girls go by. I think he’s dreaming of his dual life before Mexico and El Norte met. I see him there every day as I turn into the driveway. He’s old now. His breasts sag in tempo with his eyes and his breathing. His nights are spent inside, somewhere, bedless and despondent. He’s probably dreaming of Mexico. 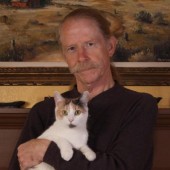 Rick Hartwell is a retired middle school language arts teacher living in Southern California with his wife of thirty-five years (poor soul; her, not him), their disabled daughter, one of their sons and his ex-wife and their two children, and eleven cats. Yes, eleven! When not writing he wishes he were still pushing plywood in Coquille, Oregon.