“So, hey, Kelly, I have something for you to work on, but you gotta, you know, be careful when customers come in.” This is John. John has a goatee and wears a thick, gold chain that disappears behind his tucked-in polo shirt. His jeans are pegged, his hair is gelled, and his upper lip gets caught on his gums, making his mouth a permanent grin.

This is where I am in life. Working an under-the-table job as a graphic designer at a small print shop on the outskirts of Pittsburgh. I’m in college, I tell myself. This is temporary.

What got me here was desperation. I moved home from London earlier that summer, jobless, lonely, and depressed. At 27, I was the oldest student in all of my classes. Oh, no, I have a degree in design, I just returned to school for a different degree, I’d over explain to every 19-year-old who looked at me funny.

This is temporary, I repeat to myself. But sometimes temporary has a way of settling in and spreading out.

John’s shop is small. Two rooms. The front, where I sit behind the counter next to a large store-front window, and the back, where several broken presses sit in all forms of disarray. When I drive by at night I can see computer-screen lights peeking around the plastic edges of the closed blinds.

“So, remember that lady who comes in here for copies? Uh, Diana, I think her name is.” John starts all of his sentences with the word so. As if the word softens the blow of everything after it. I can see through his permanent grin that he is excited and uncomfortable.

“Well, so, you know how I told you she is in the ‘film’ industry?” he says. John also likes to use air quotes.

“Yeah.” I don’t look up from my computer.

“So, yeah, well, she wants us to print some, you know, marketing stuff for her, uh, business.” He says. “But, you gotta keep it quiet, cause I don’t want other customers seeing it.”

I’m mean to John. At this point, I’m mean to almost everyone who comes into the shop. Most of the customers are John’s friends, and most of John’s friends have questionably legal careers. I print illegal betting forms, business cards for fake businesses, pre-purchase ticket forms for events that will never happen. I do it spitefully, as if the resentment for the job absolves me from any action that can identify me as an accomplice.

John has no choice but to tolerate my meanness. The designer before me stopped showing up one day after she developed a heroin addiction, and I was the only one who responded to his ad looking for a new designer.

“So, here are the sizes she wants, and here’s the text. If you could, uh, don’t put the words over her, uh, things,” John says.

“You know, like, her things.” He points in the general direction of her breasts and nods toward her vagina. He walks away, but then does this thing that has become part of our daily routine. He pauses in the doorway with his back to me and adds one last instruction. “Oh, and if you could do some of that photo stuff you do to make her look better. Like get rid of her stretch marks and stuff.”

John is pretty good at passing things off. When my computer crashed after having been there only a few weeks, John called his “computer guys” to come fix it. Only he dialed the number and handed me the phone. After several minutes of explaining what my computer was doing, the IT guy on the other end sighed.

“What’d they say?” John called from the back.

“They said you need a new computer.”

I like to blame John for all of the unsavory things about me. Thanks to my association with him, that computer guy felt like it was okay to speak to me that way. A woman. A student. Someone’s daughter. But I didn’t stop it. I don’t stop any of it. I print the business cards, I copy the betting forms, and I will blur the stretch marks around Diana’s vagina. Hell, I even gave myself a raise since John trusts me to figure out how much cash he owes me at the end of each week. And there have been too many occasions where I chuckle at an off-color joke that one of John’s friends makes. I spend a lot of time judging John and his customers, but I am not slumming it at some shitty job to get through college. I am not entirely out of place here. There is a part of this, I think, that is not temporary.

I drag myself to the only other computer in the shop, where John usually sits. I clean the mouse with an anti-bacterial wipe before I scan the photos. I smooth each stretch mark on Diana’s thighs, erase them from memory. And when the next customer walks in, I minimize the photo so neither of us has to acknowledge what I am doing. 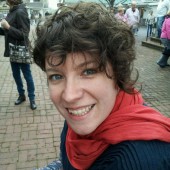 Kelly Scarff is the author of two poetry chapbooks, I Fall in Love with Strangers (Liquid Paper Press) and Mother Russia (forthcoming, Kattywompus Press). Her writings have appeared in Apple Valley Review, 5 AM, and Shot Glass Journal. In 2014, she was a finalist for the Pangaea Prize.