“The road to heaven is equally short from all places.”
– Sir Thomas More 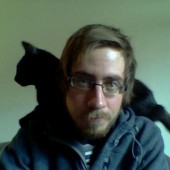 Kirk Pinho lives in the Detroit area, where he is a newspaper editor and teaches English at a community college in Michigan. He received his MFA in poetry from the University of Alabama in 2010 and his BA from Western Michigan University in 2005. His work has been published in The Offending Adam, Comstock Review, Copperfield Review, Laureate, Word Riot, Hot Metal Bridge, and Tuscaloosa Runs This: An eBook of Tuscaloosa Writers