Last Night at the Dead Goat For the first time in ten years you’re in Salt Lake City. Checked into the Hilton Centre, though you can’t think of yourself as a tourist. Twelve years of your life you spent here. A sixth of the Biblical quota. As you walk across the lobby towards West Temple you remember there used to be a night club here and swerve left but find yourself in a Starbucks. Only perhaps the twentieth best of Salt Lake’s clubs, but still good on a good day. You must have gone there a hundred times all told. A kaleidoscope of momentary memories flashes through your mind as you turn back to the lobby. On West Temple you turn left and head south. You smile as you head towards the Zephyr Club. It’s just one block south. But before you even get to Third South you can see that the Zephyr is no more. “Jeezus,” you say, looking at the railroad ties that have replaced the old darkened windows. The front door is nailed shut, its glass covering broken, half a brick still sitting among the shards. The red hand at the crosswalk signal seems specifically directed at you. No go to the past, baby! Uh-huh! You cross and stand in front of the old club. The musicians you saw here back in the day! A woman you met there once calling it a haven for the maladjusted. Not no more. There goes the best jazz club in Salt Lake, you think, whispering a holy moly under your breath. No Hilton club. What was that place called? No Zephyr. Can’t be good. But then you remember the Dead Goat Saloon. Favoured by some of the bluesmen over the Zephyr. Last time you were there you saw Eddie Shaw and the Wolf Gang. Now where the hell was it? Somewhere around here. You never lived downtown. Who did? Did you get it imprinted in your deep structures, you wonder as you amble north. Same street? That’s the problem with these grid cities. It’s easy to find your way around but also easy to get one street mixed up with another. Back past the Hilton you track. Second South. Nothing here. Could it be this far up? Yes! You walk up a block and catch sight of the familiar sign. A goat’s skull with ram’s horns, the words ‘est.’ and ‘1965’ placed between the curl of the horns. As you get closer to the entrance, down a brick alleyway, you hear live music coming from the basement. You’re in business. But as you enter, you see the handwritten notice, along with today’s date: Final Night Before Closing! The place has an empty sound to it. Nobody else is entering. Nobody’s leaving. There’s also no one manning the door. You walk down the stairs fifteen years after you saw Eddie Shaw play sax to a packed house here. The good old Dead Goat! The Salt Lake underground isn’t quite dead yet! When you walk into the bar, though, it too is empty, except for the bartender, who is cleaning a glass and tells you there’s a five-dollar cover to enter the concert room and hear the band. You order a pint of Polygamy Porter, tell him to keep the change, and enter the band room. There’s nobody in here either, except the band, a three piece belting out a wicked rendition of Catfish Blues to the empty room, the empty chairs, the tables, and now you. The frontman raises his hands and laughs as the song ends. There you are with your pint. “This is yo night, Sir!” he says. “Yessir. This right here is yo night!” You say you guess so. He turns to the guitarist and the drummer behind him. They are also amused. “We got ourselves an audience right here!” he says. “Let’s give it up fo the man!” The drummer clicks his sticks together and the guitarist bats the body of his guitar. The frontman continues. “Let’s rock this house! This right here is the last night, the last night at the good ole Dead Goat Saloon!” The band strikes up into Red House. It just so happens it’s one of your favourite songs. You take a deep draught of your Polygamy Porter and—encouraged by the frontman—put it to your mouth again and keep glugging till it’s gone, by which time the song is well under way. You start bobbing your head. Tapping your feet. Moving your arms. The band plays for all it’s worth. Like it’s going down on the Titanic. You start to dance. The old blues two step. Head bobbing. Shoulders in sync with the shuffle beat. Soon you are one with the band. They shoot their fists towards you in the intervals. You’re pumping the air back and rocking like a teenager. When the song’s over, you applaud and whoop for all you’re worth, and the band applauds you. “Like I said,” the front man shouts. “This right here is YO night!” He punctuates the emphasized word with a pointed finger, snapping his arm as if firing a gun. 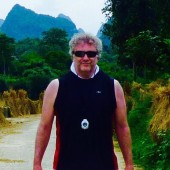