Lawn of the Year The Martins owned 107 Crater Lane, a Victorian surrounded by sugar maples and pink dogwoods. It had a stained glass front door and a wraparound porch strewn with twinkle lights. The front yard had a tire swing and a statue of an angel. Mrs. Martin’s garden was featured in the local newspaper twice.

Ours was number 105, the third boxy rental we’d lived in since my father drowned. It had vinyl siding and one scrawny white crape myrtle.

We trespassed on a whim that first time. One October day Mom stared out at the Martins’ brilliant red and gold foliage. Our crape myrtle had already lost all its leaves. The Martins were out, so she took me next door to jump in their leaves while she took pictures. A few weeks later I lost a tooth, and Mom thought wouldn’t it be cute to get a shot of me grinning in the tire swing. Soon, whenever the Martins left for church or the girls’ ballet recitals, Mom would break out the digital camera she’d won from a PTA raffle. I got into the spirit of it, too, begging her to take my picture with the Martins’ cat, Pud, whom I renamed Alexandra.

I must have been seven or eight the afternoon we decided to peek in their windows. The living room was out of Southern Living, with handmade quilts draped across weathered furniture, shelves of antique books, jars filled with dried flowers and pine cones—stuff that would look messy in our house but looked homey in theirs.

I knew this was probably taking it too far.

My curiosity winning out, I slipped inside. Framed cross-stitch sayings, like “Mom’s Bed & Breakfast—Make Your Own!” lined the walls. I pictured them repeating that joke every morning and laughing. I moved on to the kitchen, keen to see what was in the refrigerator. Fresh fruit. Half a cheesecake. A six-pack of beer with crescent moons on the labels. Diet dinners filled the freezer.

Upstairs I found the Martin girls’ rooms. I could tell whose was whose from the dolls that matched their coloring—a blonde for Celia and a redhead for Andrea, each lying atop a neatly made bed. They were close to my age, but we never spoke—just as well, since I’d have felt awkward if they came over and saw all our pictures of their house. Celia’s dresser held exactly ten travel-sized bottles of lavender hand lotion, and I couldn’t help taking one and putting it in my pocket. I kept it for years, never using any.

When I came out, Mom smiled and rubbed her hands together. “Did you see anything interesting? Or unusual?” she said.

“They have an old pinball game in their den,” I said. “It still works. You don’t even have to put a quarter in.”

“Anything else? What about—”

Mrs. Martin’s car pulled into the driveway. She jumped out and stalked over to us. “What’s going on?”

I huddled behind my mother, grasping the lotion bottle in my pocket.

“I thought I saw smoke,” Mom said. “Could you have left the stove on?”

I barely made out Mrs. Martin’s words, which I wouldn’t understand until years later, when similar words would be said to me. “He’s through with you.”

Mom took my hand and led me silently back home. We moved again a month later.

The man in my bed now asks about my childhood. I describe the garden, the twinkle lights, the pink dogwoods. I show him my photo album. The inkjet prints have faded, making me look like a ghost haunting the Martins’ house.

“That’s what I’d have guessed,” he says. “That you grew up in some kind of magical fairy land.”

I nod. “Every detail was perfect.” 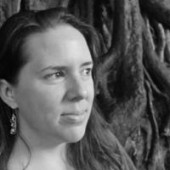 Katie Burgess lives in South Carolina, where she does improv and is editor of Emrys Journal.