more than the peach blossom, lemony
afterglow on the puddle’s surface,
mud flap, the courtesan’s slippers,
twinge of rosemary, Bunsen burner,
olive pit spit from a moving vehicle,
lip wax, candle wax, sex wax, heads
up penny brining under the fountain,
the treacherous switchback, alpaca,
ferryman’s gun holster, his lantern,
his goddamned ferryboat, light
when the lantern sputters to nothing,
the windsock righting after another
tornado, concrete torn from the hwy,
for a good time call in a bathroom stall,
glory hole in the sky, sacrificial lamb,
the Almighty’s bathrobe, His dental
floss, clamps in the open-heart surgery,
hash browns glittering on the all-night
griddle in a diner just outside of Yulee,
fresh pot of coffee, eggs done with lace,
the brainchild, the combine, the harp,
the end-all-be-all, the elegance
of a butterfly knife pirouetting open,
the way it glistens, the slow carving
of initials into the skin of an elm,
birthright, death rattle, unidentifiable
potluck dish the neighbors rave about,
ham curing in the meat locker, apple
of my pig roast, song that can only
be whistled through your teeth
and then forgotten, sailboat wreck
in the harbor, dreamscape, Athens,
Peoria, columbine, chaff, fish stick,
wimple and yolk, the opened rape kit,
the years lost fighting someone else’s
cancer, the open cut, the saltwater,
the nibbles on the ankle, everyone
retreating ashore, influx, aftermath,
perpetuity, hiatus, when all is said
and done, the showstopper, the hair
trigger, the hothouse, the bathtub
washrag, the unnamable, untamable,
the unharmed rooster in a cockfight,
God willing, hitch in your giddy up,
stain on the carpet, the don’t make me
come in there, the pocket slicks, handy
in a pinch, camel’s hair passing through
the needle’s eye, the one your parents
warned you about helping you into his
Camaro, helping himself, helping yourself,
cover the damn thing in honey, the tongue,
the translator starting to loosen his tie. 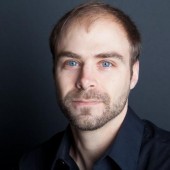 Travis Mossotti was awarded the 2011 May Swenson Poetry Award by contest judge Garrison Keillor for his first collection of poems, About the Dead (USU Press, 2011), and his work has appeared in such places as the Antioch Review, Manchester Review, Poetry Ireland Review, Subtropics, The Writer’s Almanac, Vallum and many others. In 2009, he was awarded the James Hearst Poetry Prize from the North American Review by contest judge Robert Pinsky, and in 2010 his poem “Decampment” was adapted to screen as an animated short film. He currently resides in St. Louis with his wife Regina and their daughter Cora.