John was born with monochromacy, also known as total colorblindness. By grade school it became clear that he couldn’t distinguish any of the colors in the red, green, blue spectrum. When he colored with the other children during art class, he instinctively went to the black crayon. He wouldn’t have had the language to say so, but black seemed somehow purer than the other colors. When his kindergarten teacher asked him to point out the blue segment on the color wheel he started crying.

This ultimately, though, turned out to not be such a bad thing. He had 20/10 vision and, as the world began to end, this better-than-average vision helped him to pick out potential enemies hiding in the woodwork or stalking the horizon (he was a good shot with his Winchester 70 Stealth). The world was gray, covered with an ashy substance, and all color seemed bleached from it anyhow. People—in their almost invariably gray and dirt brown clothing—blended into the terrain. Thanks to his colorblindness, John could see these people trying to hide. He put them out of their misery.

He found a good place to camp near the coast in the former Mississippi. After a while, he decided he must be the last living human in the state. Now and then he saw a rat or some other vermin that had managed to survive. He would shoot them too, but for food (he was uncomfortable with the idea of eating humans). He went years without seeing a living being of any type, but there was plenty of canned food still in the grocery stores. Until there wasn’t. Then he put his mind to it and decided that he’d move southward, down the coast of the former Florida, moving up the opposite coast, eating as he went. He might survive back to the top of Florida before he died of old age or something more unpleasant. Surely the Sunshine State would have plenty of food.

John discovered his first human, the first human he’d seen in many seasons, in what used to be Florida’s state capital, wandering a former college campus. He no longer had the urge to shoot humans and anyway this one seemed unarmed and harmless. He was old, shouted “Repent! Rep-pent!” at John until John opened a can of peaches and fed him. When Preacher wasn’t shouting at John to repent, he would speak some type of baby talk—“ba da da ba ba”—with the most profound, intelligent expression on his face as if he were pronouncing scripture. John washed Preacher’s foot which had a nasty cut on it—pink and seepy—then led him to a drug store whose signage proudly proclaimed it was “Open All Night.” With the help of a Physician’s Desk Reference he found behind the counter, he gave Preacher what he hoped were the appropriate antibiotics and then fed the old man some cookies so he wouldn’t puke them up. John found plastic sandals for the barefoot Preacher to wear until he could get him more sensible shoes.

As John and Preacher moved south together, taking their time, stopping for weeks or months at a time to eat and rest, they often saw the hulking corpses of the robots which had formerly served humans and then, afterward, destroyed them, or at least most of them. Just like in the science fiction movies that people had made for hundreds of years, processing their fears about the scary advances awaiting them in the future, the robots, who had been given the power of thinking for themselves, had “decided” that they were superior and, rather than serve humans, would destroy them. Unlike in all those movies, though, the robots were endowed with the same flaws that their creators had, the worst, in a literary sense at least, hubris. More specifically, the robots didn’t carefully consider what their actions would lead to, namely, that they’d need to maintain the power grid to exist, that large-scale nuclear war would probably lead to a lack of electricity which would, of course, lead to a lack of robots. Humans didn’t need a power grid which made them, even if less quick-thinking and physically weaker, superior and more likely to survive.

Strangely, as John aged, he realized that he was starting to care more about the future than he had when he was younger. He realized that he was no longer living simply out of instinct, that now he was motivated by real desire for a good life. After he and Preacher moved cities, John would find them comfortable lodgings in a motel or abandoned house without carcasses in it, or he’d just set up their tent and make Preacher comfortable. Then he’d go out into the city looking for delicacies and other finds: candy, sodas, warm clothing, new sleeping bags, and once, a miniature New Testament which made Preacher clap his hands with glee, flipping through the pages of the tiny book, baby talk yammering. The more time John spent with Preacher, the more he regretted his earlier prudence—when he shot anything that moved. After all, he had shot several young women—women who were usually armed (though everyone was potentially armed at the end of the world). What might have happened if, instead of killing those women, he had tried to talk to them? Perhaps they might have fallen in love. Perhaps they might have had a chance in this new post-world, a chance for building a society.

John and Preacher spent five years in what had formerly been Miami. It was warmer here than it had been anywhere John had been, sometimes getting into the forties in the day, and he was determined not to head up the coast as he had originally planned. Instead he discovered a yacht with only minor damage and mostly of the age and neglect variety—a hull covered with barnacles, a few cracked joists and planks. He replaced its rotted-out mainsail with one he scavenged from a boat in a nearby marina. He hoisted the yacht out of the water and painted it in marine paint filched from a boat supply shop inside the city. While he worked, Preacher sat on the dock, reading his Bible and gibbering, staring out to sea, pointing at the sun as it came up in the east, shouting “Repent!” at John as he made his boat sea-ready.

Inside a freezer on the boat, John discovered a large baggie of marijuana which, unlike other pot he’d found over the years, didn’t dissolve into dust as soon as it hit air. One evening, in the little house they’d acquisitioned in a formerly middleclass neighborhood, in front of a roaring fire of paperback novels in the old fireplace, Preacher suddenly spoke. The baby talk became speech so gradually that, at first, John assumed he was having a minor hallucination. But then he realized that, no, Preacher was speaking real words, real sentences. And the first thing he said was “My name is George.”

“Oh,” John said. “Pleased to meet you.” Stoned, John laughed. They had actually known each other for many years by this time, perhaps a decade. George’s hair had grown long and shaggy and gray. His beard reached down his chest. He looked like an Old Testament preacher. In fact, he had taken to wearing a ratty, dark bathrobe out into the streets and that, accompanied with the oak walking stick that John had whittled for him, gave George the air of a Moses figure or just some generic type from a Bible film of old, an oracle maybe.

“Not exactly, but when you smoke you’re distancing yourself from the Lord. That’s not what I’m talking about.” George sat in a beach chair in front of the flames. John sat on the couch which was slowly spilling its stuffing all across the cracked, wooden floor. George didn’t speak for so long that John, again, wondered if he’d imagined the entire exchange, and stared into the fire. “I’m talking about this journey you’re planning,” George said so suddenly and loudly that John shouted in alarm. “Where were you planning on going?” George gestured toward the front door where piles of food and water and ammunition and tarps and life jackets and warm clothing waited. A lot of their provisions were already on the boat. In fact, John had been thinking that they’d be leaving in the next day or two, whenever the weather seemed calm. The sun had been starting to strengthen to a dull ebb and the weather had warmed. It might be summer.

“South,” said John, staring into the fire, trying to decide what he thought about this preacher with a name, this preacher who could talk. How long had he been able to speak?

“I disagree,” George said. “We should go East.”

Already losing interest, John got up and threw more books onto the coals. “Why?”

“That, young fellow, is where the land of our Lord Jesus Christ lies. Jerusalem. The Atlantic will lead us right into the mouth of the Mediterranean where, surely, in this time of judgment the Savior will be leading his flock up into Heaven. We don’t want to be left behind. Amen.”

John sank back into couch. “Maybe,” he said, considering, as the preacher preached, stormed back and forth in front of the fire, using his new words, making up for silent time, eloquently expounding on what the Redeemer would want from them in this Time of Trial. John barely listened. Instead, he thought of his father who had died many years earlier. His father, too, had been a preacher. Less a fire and brimstone type like George, more an intellectual and liberal, but definitely a leader of his flock, a man who had opinions and had no compunctions about sharing those opinions with his only son, attempting to guide him on a pathway to a better life. Of course, all his learning and theology hadn’t saved him from the robots. He’d been burned to a cinder inside his church by a robot as tall as a building. George’s preaching became a dull murmur as John drifted inside, his eyes almost closing. Yes, he’d head south as planned. He’d skirt Cuba and the other Caribbean islands until he hit Brazil, forge into the Amazon jungle—which, hopefully, was still there—hacking vines with a machete, clearing land. Perhaps, there, he’d meet someone he’d rather be with, maybe a woman, someone he could love and make babies with. He could see those babies now in his mind, born into a world of green. They would have shed his recessive gene and be able to see it. The world would glow. 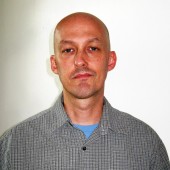 John Duncan Talbird's fiction is forthcoming or has recently appeared in Ploughshares, Literary Imagination, South Carolina Review, descant, Grain and elsewhere. His sudden fiction has been nominated for a Micro Award and the Best of the Web anthology. A former writer-in-residence at the Virginia Center for the Creative Arts and Lower Manhattan Cultural Council, he is an English professor at Queensborough Community College and lives in Brooklyn.