Letter to Jenks from Hurricane Jeanne Allison, I’m not done,
and neither is the atmosphere.
The weather geeks have cycled and recycled
through a flimsy alphabet like toddlers
screeching ABCs—irises swirling,
lungs swollen with wind.
A necklace of hurricanes beads the Atlantic.
A whip of hurricanes lashes westward:
a parade of pinwheels, a luminous belt
in the constellation of a hunter….
O Allison, I am sick
of metaphor. But to be literal in a surreal world
is ludicrous. Example: the south-
eastern U.S. is enduring too many tropical storms.
Expository! Obvious! Dull!
I’d rather choke back bilious metaphor:
Haiti is underwater, an Atlantis of mud and straw….
And Florida is a thing simply to be pitied.
Remember when Bugs Bunny sawed it off,
and the state floated away like driftwood,
like an ark? Unlikely, if one chooses to be literal—
but that’s all that will save Florida now.
The palm trees are tired
of posing for news cameras, bored
by the ceaseless bending and swaying.
Even the alligators are spent, and waddle
to Albuquerque, to Pismo Beach, to the North Pole,
scale by miserable scale, tail by dismal tail….
Floridians don’t even watch the weather
anymore. They slog from errand to errand,
weighed down by scuba tanks,
too exhausted even to sigh as they mail packages,
sift for ripe lemons in the grocery,
walk their soaked and panicked spaniels.
They know that Killer is next,
followed by Lasher and Monster
and Nailbiter and Ogre and Punisher—
all lined up like fucking reindeer.
Allison, my poor Florida belle,
where can I keep you safe? What fabled Ark
can I rent for us, what marine limousine,
and where could we sail? Not even outer space,
Love: more spirals, cosmic hurricanes—
too many galaxies to name, and not enough
alphabets to name them. Only a gorgeous
view for us to curse, to spit beer at,
as we’re lashed by solar wind,
our ship’s hull pelted by rocky debris—
a stinging rain emptied of all mercy.
Photo By: joel 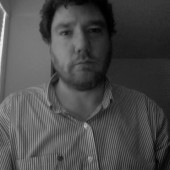 Mike Dockins was born in 1972 and grew up in Yonkers NY. He holds a B.S. from SUNY Brockport (1999), an MFA from UMASS Amherst (2002), and a PhD from Georgia State University (2010). His poems have appeared in Crazyhorse, The Gettysburg Review, Third Coast, The Greensboro Review, Quarterly West, Willow Springs, Salt Hill, Atlanta Review, jubilat, Mid-American Review, Indiana Review, Gulf Coast, West Branch, Meridian, PANK, and elsewhere, and they have been reprinted on Poetry Daily, Verse Daily, and in the 2007 edition of The Best American Poetry. His critically-acclaimed first book of poems, Slouching in the Path of a Comet (Sage Hill Press, 2007), after moving 850 copies, is currently anticipating a third print run. Mike moonlights as a singer-songwriter. Fame For Zoe, the latest (2005) full-length album from his acoustic-pop duo Clop, is available on iTunes. After a stint in north Florida, he’ll soon be back on a hill above Hammondsport NY where a fangless tabby misses sleeping on his neck, which is a little weird. And nobody will believe this, but Mike is also Director of Internal Communications for a small web-based company, which is very weird.