Letter to Sue From Durango I don’t recall the town’s name, Sue,
though it likely had Colorado’s best café
pie. Mary Ann and I stopped for coffee
only, our beagle napping in back. I knew
as soon as we pulled for Durango,
that frozen slice on a steaming 1950s aqua sign,
this would always be the pie that got away.
I’m not saying yours is not as good. Probably
better. I’ve quoted you snow below the melt
of the Medicine Bow as one way to praise.
But for road pie this was it, retreating
in the rearview as I’ve seen so much
of my life. I’ve come now
to Durango to soothe the soft spots.
I’ve let too much in. You have too.
That’s why you do social work, wending
women through the low places. I can’t,
for all the gunfights in Durango, remember the name
of the town with the pie. Perhaps it was Wistful,
there on the border of I-better-not-say
and How-did-my-child-self-somehow-survive?
When I turn the map there are no names
but Ouray, Montrose, and Pagosa Springs.
I knew even as a kid I was sinking
from everyone else’s years into the quicksand
of their over-exposed heart. Borders slur
my word. I won’t say
I drowned. That would be cliché. Somehow
I uttered a mouthful of mud like others
wrangle wit. In Durango, I confess,
I spent the night with a stranger.
Don’t be alarmed. You’ve known me
thirty years. It meant nothing.
It was merely a way to shake the road
and momentarily forget my beard.
And Mary Ann approved. The stranger
was this town in a calming Western now,
built by railroad barons to spite Animas City,
which refused the Denver & Rio Grande. Durango
is now more than gunfight and whiskey,
homesteaders and whores. The rail has given
way to a Narrow Gauge run, seven times
a day, to Silverton on the Highline, where men died
dynamiting a shelf from hard granite. Some lost
hands. Ears. They were blasting away
their own hard place. At night, by the fire,
tuckered from the load they’d lugged all those years
from childhurt, they surely must have loved pie,
as do I. My own lost slice
trails me the way a rain-soaked stray
from the roadside might loud into my now,
Drape me a towel. Bury your face in my all-day-
rain before the wood-cozy of your stove.
In what town that hound of pie found me,
I still can’t say. It wasn’t Silverton. Certainly
not Fairplay. Nothing’s fair when we miss the train
from our stiff-lipped youth into the painful fruit-swelling
of now. Had I my wits, I would have parked
my coffee and surely ordered
apple—like yours—though in a bowl heated
with cream. Mary Ann says I eat like a kid.
Perhaps I’m spooning a soggy past,
prodding the soft crust for the core.
Your husband Gene did that, making art with armor—
crickets, lobsters, armadillos, any careful
crustacean to guard the tender and the torn.
You miss him, I know. He left ahead in search of pie.
I wish I knew in which town, that place he now abides—
any café booth between here and the mysterious
there that displays the steaming hope of hot coffee
softening crust on the gentle road down.
Your pie is always right. Apple. Rhubarb.
Even Paisley Pie, with that swirl
of cream cheese. You could flour-roll Kleenex, I say,
and give it taste. I hesitate to praise.
You’ve got a Ph.D. A woman making
her bills. Years of social work.
And all the art of your textiles and photography.
And a man equates you with pie?
Go now. Throw one in my face for my sexist sway.
How many times have you, in your profession, thrived?
In the small of how many Colorado towns?
What fabrics have you woven from dust? Particles
of flowers surge in the bend of your lens.
How can you or I ever be said
with the poise of any single slice? Through what
possibilities do we pass, without noticing the revolving signs
of our lives? We are more than women and men,
baseball and sex, cuddling and crust.
Something got inside. Something got inside
the child and almost died. When we were young,
they must have given us lard, dusted us
well, took a fork and perfectly poked
our tender places with tiny pockmarks that said
despite the coming strain we would one day survive.
I can’t remember the place, can’t recall most names
in fact, but call it Wistful, perhaps
Regret, hollering loud before the heat
for a good flour dusting and a hard pin
to roll us thin. For the pointed prongs
of the tines. And after, for a moist towel
over the sugary bowels
to allow the fruit-cooling, as the daring
Western air reminds us in each savory display
what not to eat, what never to leave behind. 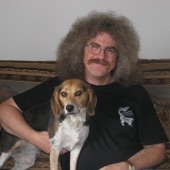 George Kalamaras, Poet Laureate of Indiana, is the author of seven books of poetry and seven chapbooks, including The Mining Camps of the Mouth (2012), winner of the New Michigan Press/DIAGRAM chapbook contest, Kingdom of Throat-Stuck Luck (2011), winner of the Elixir Press Poetry Prize, and The Theory and Function of Mangoes (2000), winner of the Four Way Books Intro Prize. His poems have appeared in The Best American Poetry (on two occasions), Denver Quarterly, The Iowa Review, Kenyon Review, New Letters, North American Review, and many other anthologies and journals. He is Professor of English at Indiana University-Purdue University Fort Wayne, where he has taught since 1990.