She’s smiling and it almost hurts you,
the ring of it, the recognition of this
as a kind of opportunity
here on the liftgate of a delivery truck.
You’ve forced a conversation about art
out of the boxes painted like cows’ hides,
and it’s OK, we’ve found a way to use
every other part of the animal. And the stacks
of copy paper six feet high like naked trees
with branch-less rectangular trunks
are so sad she says— we’ve boxed
the green world for our greed world
and things and her hands are shaping
something in the air in front of her, and
you recognize this invisible shape
as the embodiment of everything that is right
and good with this conversation
and she nods so you nod with her
and take comfort in your mutual realization,
the potential intimacy of freight.
How close you’ve become with just paper
and an image from cow. And now art.
Beyond you the Madonna Della Strada chapel,
a concrete monument with electric chimes,
towers over the concrete shore of the lake
while in the truck bay two tanks of oxygen,
like green rockets, stand strapped to the wall
and the other frame on all of this hangs above
the cow boxes, copy paper and the air:
it’s what you’re really trying to talk about:
some figure studies and BEAUTY,
the all-caps kind and the glossy kind, too
and its contract with erosion. Beauty brings
you close to her. It’s open-ended…non renewable;
it’s the parts and labor that’ll kill ya. Hope
for laughter. The pink receipt on the bottom
is mine, right? she says after signing the sheet
and you’ll never remember the specifics of her
order, just the transaction, which is more than
just the action in the air of the scene
about beauty because beauty is a preposition,
a starting point, that’s what the sculptor said.
And you understand this in relation to the article
you’ve read about the show downtown:
Figures done in charcoal. Full-size studies
of bodies sculpted out of wood then charred
to black and hanging (only one in a noose)
in some white-walled gallery. Why are we always
waiting for the next opening? Does she ask this
as an indicator, a signal that you’re approaching
a docking area with marked-off zones and lines
telling you how to behave when you play?
Let’s be quirky art hoppers who whisk
through in shawls and touch only the corners
of cheese cubes. Let’s nibble and speak
in hushed tones next to the nudes. Then
the piercing needle of the pager’s stupid song.
What about Beauty? she asks. Because the lines
have been blurred you don’t say anything
that your grin doesn’t already say
until now. Beauty’s a cardboard cow.
Beauty’s the echo of the door slam,
chorusing with the backup beeper
ringing of reverse, banging between
the concrete walls of the chapel and library.
And there is another kind of it, the pure
matter kind— it has to exist—it’s exactly tangible,
has mass like a baseball or a heart jaggedly
cut-out of construction paper with just
two small symbols on the front: 4U
printed in black crayon, the letters S and B
on the back. See? It’s a third grader’s protest,
too shy to try cursive’s sensual bends
and bows so the valentine’s almost blank
but its face mimicked another kind of it,
the bald and flatly honest kind
from a snot-nosed kid asking for just one more
minute, one more game, because the clocks
were on us even then when everything
happened between bells. 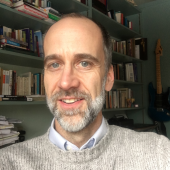 Scott Bade lives in Kalamazoo, MI with his wife Lori and sons, August and Stuart. Scott is pursuing a doctoral degree at Western Michigan University. He is a former poetry editor for Third Coast Magazine and editorial assistant at New Issues Press. His poems have appeared in Fugue, Parthenon West Review, H_NGM_N, and others.