It was like this. There was the house, and the five of them in it, and the green smell of rain. And more, the smell of cooking: garlic and cumin. Music, mostly bands not many other people knew, crackling and earnest, but also other things–The Grateful Dead, Nirvana, Johnny Cash–depending on who was home and the mood of things. The sound the garage door made, its panels rippling as it was pulled open and shut, and the ticking of bicycles being wheeled in and out. And the rotten porch step and the hitch it caused in everyone’s stride as they skipped it running up and down the stairs. The continual stream of people sleeping on couches, the unlocked door, the piles of mail addressed to previous tenants, the rich earth of the overgrown garden, the backyard maple, the curtains made of old sewn-together clothes. Half-finished canvases, political science and poetry textbooks, zines about revolution and fermentation and natural birth control, someone’s boots half under the couch.

There was the house and how it held them, creaking to itself sometimes in the early gray hours of morning. The house, and people coming always in and out, the recycling piling up in the corner. School bags slung down, pants still rolled from bicycles. Always news and laughter. Christopher coming to see Mumble, their high-fiving and wrestling, their chin-up contests on the lintel of the kitchen door. Hester Finley, streaked with colors, wandering around in just her painting smock. The clatter of Kayla’s heels on the stairs, her cell phone’s singing. Cisco mapping out philosophy on the broken chalkboard in the living room. Rosie with a tea mug in the window chair, her poetry notebook unopened on her lap. The rain pattering, pounding, pouring out of the gutters. The constant ring of the telephone.

Rosie and Cisco cuddled on the couch together, their textbooks beside them. Kayla on the internet researching abortion rights. Mumble painting an anti-war banner to hang off the 45th street overpass. Hester Finley on the telephone with yet another boy. The house, collecting days and dust and lost socks in its crannies. The blackberry bushes curling their pale green tendrils inch by inch down the fence and across the yard. Mice making nests and babies in the walls.

The mice making their nests from lost socks and old flyers and bits of Rosie’s yarn. Blackberry roots gripping earth, creeping over the overgrown garden. The house, humming to itself the refrigerator’s song. The wind blowing tree branches against the window. All of them together, yet lonely as dust.

And around them the Emerald City, built on its seven hills. Theirs being a northern one, small and steep. Their street and the park–a deep gash of woods–and the University with its brick and rare trees. Below them, the Ave, all hustling and bustle, the humming flow of the city. Farther, the lakes and the locks and the Sound. Boats and ducks, and muskrats when the water turns dusky. Past it all, mountains in the east and mountains in the west and in the south lone Mount Rainier, floating as serenely as the cloud tourists sometimes thought it to be.

And out, on and on, into forests and oceans, and wide flat fields of wheat. Towns, some swollen and bursting, some dry husks, and roads of all kinds going everywhere, and everywhere things happening, but very little of it being told in the news.

In turn, the news coming back across the forests and towns, bouncing through the air from whatever mind or place it came from, and always those days about one thing: war, though it was not called war. Shock and Awe, they called it on the news. A war with a firecracker’s name. But words aside, it was war, and it was this war that came home in headlines to Rosie and her friends and their house on the rainy hill.

Maybe it was the war that made it feel as if everything was changing, intensifying, that the moment of crux might come at any time. A feeling like autumn, despite the daffodils growing so hopefully in the yard. Maybe it was only graduation looming. Maybe everyone felt that way. Yet it tinged their laughter and their debate, ran behind their grand ideas and small acts of defiance, was an unspoken knowledge nagging at their dreams. There was a bitter edge around the sweetness of things, a restless wind. The high, herringbone clouds that foretell a change of weather.

But what is there to say about how things were? It is as if once a thing is said, the opposite becomes just as true.

For instance: they were happy. But then why was Hester Finley running around without sleeping? Why did Kayla drink coffee as if it was food and Mumble ignore his mother’s calls? Why was Rosie shaking in the hallway, burrowed into Cisco’s shirt? Why were his eyes so distant as he held her? Why did his hand move as if it was not his own?

Later, of course, things were different. Later, the house was gone, or they were gone from it. Their textbooks were sold or forgotten. Then even photographs show a clarity about Rosie: the intensity of her gaze, the sad edges of her eyes and their laughter. How she stands, straight and certain, grief and wonder spilled all across her face, and more than that too. How she knows what she is thinking, what she will say and what she will do.

But then, it wasn’t that way at all. Picture this: a black and white portrait Hester Finley took for class–Rosie in the big chair in the living room, an over-stuffed silhouette against the street-lamp-lit windows. How hard it is to tell where she begins and the shadows end. She is moving her head, and this blur–this indistinctness–is the only thing lending the photograph her presence. Bright as the time may have been, she lived like a sketch of herself, a Polaroid halfway through its exposure.

Picture them together in their falling-down house, five of them, their textbooks and bicycles. Picture them alone, as everyone is alone. Picture them as drops of water in the vast tide of humanity. Picture them imagining their own will was all that moved them, that they were not pulled by the gravity of the moon. 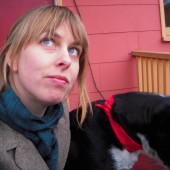 Becca Rose Hall writes fiction and teaches poetry to homeschoolers in Seattle. "Like a Spark to Darkness" is excerpted from her unpublished novel, Good Like the Sea. Her work has recently appeared in Contrary, grist, High Country News, and Quick Fictions. She is currently working on a new novel about the devolution of an interracial marriage in 1920's Seattle.