Julia shouts for me to pull over, to turn around and go back. But I’ve gone too far. I’ve already passed the point where I could be forgiven, past the legal hit-and-run line. Besides, I’m no good in an emergency. I don’t think straight. Anyone can tell you that.

A half mile or so, at the stop light, Julia tries to scream again. Instead, she looks like someone with a piece of steak in their throat, like she’s not getting any air. Even worse, she looks at me like she doesn’t know me. Like I’m a stranger. I look back to the road in front of me, giving it my full attention this time. I know that I should have stopped. I feel like kicking myself for just driving on like nothing happened. I feel bad enough without her making it worse.

I’m no monster. I have feelings just like the next guy, but I don’t need that kind of trouble: a crowd and cops, jail. Besides, if it really was a kid I hit, I wonder why this kid was running out into the middle of the street late at night, no street light, no crosswalk, no warning. I don’t see why a kid who should have been at home is suddenly my responsibility. I mean, where were his parents?

Julia won’t look at me now. I’m praying that I don’t have a huge dent in the hood or the bumper. The headlights seem fine, but you can’t really tell about emergency flashers and turn signals until you get out and inspect them.

I see myself then standing beside Julia’s hospital bed, holding our new son, him swaddled in his hospital blanket. A face and a blanket, that’s what he was to me. It took me years to say it, but I was terrified. I didn’t feel the love I’d heard so much about. I felt only fear and an impulse to run. Still, I stood there. I held him. I smiled and grinned while my family, her family, took photos of me and the boy.

After so many years you’re going to have your problems, of course, your ups and your downs, and we are no exception, but even so, we still have love going for us. In many ways, a disappointment, but we have our son. We have a house, two cars, and the money is pretty good.

I glance at Julia again, hoping she’s sleeping, but her eyes are wide open. I know better than to try talking to her. There are some things in marriage that over time, you just come to know.

If I had to pinpoint it, I mean really nail the trouble with our marriage down to a particular thing, I’d say that Julia started pulling away after she got the job selling ads for the magazine. Her job was to look pretty and meet businessmen for lunch or dinner and talk them into buying an ad. She’s always been pretty good at it too, a real people person, which is something you either have or you don’t. They can’t teach it. I’ll give her that. I mean, she’s really good. And she makes no secret of using her charms, showing some leg and cleavage, whatever it takes to get the sale. She has no qualms about it whatsoever. Not even when the men proposition her. She tells me about them and the things they say. Like I said, she has no shame whatsoever. Still, I can never quite shake the feeling that she doesn’t always tell me everything, and that has a way of really wearing on a guy.

Sometimes she comes home pretty late, wine on her breath, tells me a story about a late dinner and some jerk. I ask her how she does it. I promise myself that I won’t, but I always do. I ask how she can tempt them with sex, knowing that she’s a married woman. What about when they put a hand on your knee or try to kiss you? Don’t you just want to tell them to go to hell, or run out of there and come straight home? She just looks at me, tilts her head and squints her eyes as if I’m talking about UFOs. After a few minutes, she pours herself a glass of white wine and gives me the same speech: “Listen, I sell a commodity. It’s no different than selling corn, or soybeans, or hog bellies. It’s a commodity. What I sell is the illusion of sex. They get to play pretend, and the cost is buying ads. No big deal. No real sex. That’s it. Win win.” Then she looks at the glass of wine in her hand as if she’d forgotten about it. She blinks her eyes a couple of times, slugs the whole thing down in one gulp, and says, “I’m beat. Let’s go to bed.” Same thing, every time, and you know what I do, what I do every time? I just sit there. I don’t say anything.

The drive home, I look in the rear view mirror, feel like a bank robber driving a getaway car. And I keep glancing at Julia. Her eyes are closed. Her lips, barely parted. She’s whispering to herself. Her hands together on her lap, one folded over the other like a pair of gloves. We ride like that all the way home, me obeying the speed limit, coming to a full stop at stop signs. The more she whispers to herself, though, the angrier I get. Don’t put this all on me, I think. I’m a good man. Yeah, maybe I hit a kid, then kept going. Like everyone’s perfect? Like you’ve never cheated on me or broken my heart? At least I didn’t do it on purpose. Give me a break, will you?

I pull into the driveway, leave the headlights on and get out. Julia just sits there in her seat while I walk to the front of the car, look at the bumper and the hood, then under the car. Minor stuff, a couple of scratches.

I need a drink, so I grab a beer from the refrigerator and sit at the kitchen table. I drink it down, then get another, think about how it feels like this is about something bigger, as if in her mind there’s me on the one side and something she calls ‘the right thing to do’ on the other, and she’s no longer choosing me. And after all the forgiving I’d done.

I drink my beer, hoping she will join me at the table, maybe talk this thing out and tell me that yes, I hit a kid and I didn’t stop, but that doesn’t make me a bad man. But she heads straight to the bedroom. I listen for her, then turn around in my chair to look down the hall. Our bedroom door is closed, but I can see light under the door. Our son is spending the night with a friend, so there isn’t a more perfect time to just hash this out. I get a third beer. Things are slowing down a little now, my heart too. I want to call to her. I want to walk down the hall and into the bedroom, take her in my arms and make love to her like we used to. I want to be inside her, so we can feel like just one person again. Instead, I sit there at the table.

The next evening, Julia still isn’t talking to me or looking at me. We sit down to dinner, she whispers a prayer, and when she’s finished, our son, Eric starts right in telling us some long-winded story about school, how this bully has been stalking him and was waiting for him after math class, how his teacher doesn’t like him either, how he’s not doing so well because he doesn’t get formulas, which means he’s going to flunk, so anyway, he took another way home to avoid this kid, but he’s sure the kid will catch on and be waiting for him tomorrow, so what’s he supposed to do?

I wonder whether I should have taken him to the backyard a long time ago, spent some father and son time teaching him to box, at least given him some confidence. Or: right now, right here at the table, tell him the truth, be straight with him, let him know there’s no time for self-defense. Tell him instead to sucker punch this kid or hit him with a two-by-four or kick him in the nuts, then run like hell. But I say nothing. I just give him a look like I’m concerned, like I don’t have enough problems of my own.

“What if he finds me and beats the shit out of me and I end up with broken ribs or lose my front teeth? What if it never stops? What if I have to look out for this guy until I graduate or die. What the hell then?”

My wife suddenly looks up, glares at him, and says, “I don’t want to hear that kind of language at this table!” Then she lowers her head and goes back to keeping her eyes on her plate, back to moving her fork around like the plate won’t hold still. Her head hanging so low that her hair’s in her potatoes.

My son still looks at me, expecting me to say something, but I say nothing. I think about all those minutes doing dishes, taking your shoes and pants off and putting them on again, driving somewhere, half the time not even knowing why, but not wanting to turn around. Talking to people you don’t like. Sitting on the toilet. Calling wrong numbers. Leafing through magazines at the doctor’s office, waiting, waiting. All the little things you forget about, like every time you had shitty Jell-O for dessert. Washing your car, for Christ sake. All that meaninglessness. All that sleepwalking. For what? Don’t expect some kind of insight, some kind of wisdom or meaning. You add it all up, all the days, all the big stuff and the little stuff, and that’s your stupid life. Nothing ever really happens. Then you do something, thinking it’s some kind of big deal, that you could actually go to jail for it, or your marriage is finally over for good, but still nothing happens. The phone doesn’t ring. Your wife’s still there. So you promise yourself that after dinner, after a pep talk with the kid, you’re going to wash your car. I mean, you’re going to wash it like you never washed it before, inside and out. And then you’re going to wax it, make it shine like it’s brand new, like you just drove it off the lot. Man, that can feel better than being in love. 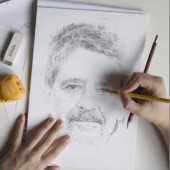 Steve Vermillion is a writer and editor living in Northern California. He holds a Bachelor of Arts degree from U.C. Berkeley where he was awarded an Emily Cook Prize in Poetry. He subsequently attended the graduate writing programs at the University of Oregon, Eugene, and later, San Francisco State University. Currently, he is a contributing editor at tNY Press. His recent work appears in print and online in numerous magazines. In 2014 his work was nominated for a 'Best of the Net' award in Short Stories, as well as receiving Honorable Mention in Glimmer Train Magazine's Short Story of the Year.