The welling when I’ve threatened to go holds men carrying burdens that need easing and women with pliable spines. It also holds me knowing I’m not going to go unless someone will let me walk away, but once I go I will keep going, picking up speed like things going downwards do. But now my father has said go, by way of packaging; my mother sat idly by except to take orders to push boxes into the hallway after he had them filled and closed.

In a Jeep outside Gram’s, I’m grabbing at air, letting feelings fall through my fingers like melted ice cream.

My father’s burden is fire. My mother’s is ice. Explode and cool is the idea, though silence only stokes the smoldering ashes, and between them sits six degrees of children; their furies, silent and excessive, stagnate us all, eight molded forms whose arms stay rigidly at their sides and keep us in a stewing isolation.

We know why my father is angry. He gets drunk and tells us.

My mother only tells us she didn’t ever mind being poor. That she was always happy. And I watch her being happy: laughing at us, making jokes, red-cheeked and sloppily dressed with a grin and a baby in her arms. I watch her throw extra things in the shopping cart at the grocery store, because my father has just scolded her for going over the budget, murmur a curse facing the metal rectangle she’s just hurled something into and come up with a smile on her face. She tells us to keep our mouths shut and do what he says. The knot of silence that pulls tighter in my abdomen is growing a pulse of its own, resilient to teaching.

It doesn’t make noise when she cries, at the kitchen table, and then sometimes a bit after he leaves, in their bedroom, and if there is no sound, it doesn’t seem to be happening. My father is there making a show out of his vocabulary and vocal cords, but my mother’s tears, her grocery shopping for what is unnecessary, her closed lips and I don’t knows, they are mute against his soundscape. There is a scared rabbit fear in her eyes, she cowers like us all, and we don’t see the guilt riding beneath it like a slick, thin layer of oil that bellies her tears.

She tells us she didn’t know you don’t bring flowers to a Jewish Funeral, so she brought her father lilacs. Her mother frowned at her conversion, purple petaled in her hands. My mother put the lilacs on his grave anyway. As she likes to tell us, her family never spoke, so like hers, their disapproval was heavy but mute.

I could see my mother carrying the lilacs tightly in her fists, defiantly naming each petal by the name of something she has never spoken of.  One for her mother’s promise not to speak to her for marrying a Catholic. One for the promise kept. One for each silent treatment that passed between them as well as every response of “I don’t like that” and no reason why. One for every one of her six children her mother has no interest in grandmothering. One for her father’s failed hardware store, his scrawny deflection of her mother’s silent wrath. One for her bicycle and her boom box, bought with her own babysitting money, one for every unfiltered Pall Mall her father smoked on his way to his grave. I know this is only what I hope for her thoughts, but the knot loosens as I think it.

My mother doesn’t visit her father’s grave on his birthday, but lights a candle on the stove top and leaves it burning all day. Each year she stands in front of the stove and doesn’t say a word. Lilacs are her favorite flower and placed next to the candle they sit like silent congratulations, a secret joke between her and her father, humor effaced by a carefully-placed frown.

She tells me Stop smoking pot in your room, you asshole with a slip of loose-leaf under my bedroom door. There is a disapproving grumble as she tries the locked knob. The note, and she is gone. And inside my room the knot beats, swollen and cumbersome, and I am momentarily turned fetal by how little she does to reach me, how between us stack generations of silence and I laugh so I don’t feel the weight of it, so I can stretch back out and quiet the pestering of what silence doesn’t say but means.

I walk up the front steps and knock on the front door. 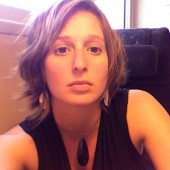 Gina Goldblatt is a Bay Area fiction writer with an M.F.A. in fiction from Mills College. Her fiction can be found in Zouch, The Writing Disorder, Sparkle and Blink and Anthologies such as Conversations: A Decade of War and Altered Barbie 2012: A Date with Barbie.