Listening to the Magnetic Fields in Central Illinois Somewhere, someone watches a Mexican woman,

gyrate against a lamppost,

though no one else in the barrio

punctuate the brush behind the house,

and occasionally go too far in their flamboyant

voyages, so that sometimes from the redwood

deck I see the wet nose of a whitetail,

generally a baby, poking through a gap

made by a sapling.  How gay.  Joyous.

one block down.  He hears but he

cannot shake loose. From where I sit, I am pope.

The dogs bark up at the moon.  The Mexican

speakers of the sycamores.  Neighbors

unplug their lemon-string lights.  A car

drives by, thumping bass.  I drain my

Ranger.  Love at the Bottom of the Sea 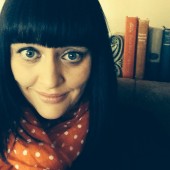 Amy Graziano is a graduate of the SIUC MFA Creative Writing program in Poetry. Her work has appeared in Blue Earth Review, Naugatuck River Review, DIAGRAM, The National Poetry Review, Quick Fiction, and Verse Daily, among others. She is currently an English Instructor at Lake Land College in Mattoon, Illinois.