The brain of the little brown bat has expanded as humans clear forests, pave roads and force the bat to develop broader faculties to scavenge for food. The brains of the white-footed mouse and the meadow vole from suburbs or cities are bigger than the brains of those collected from farms.

Human brains may have evolved to sift through a barrage of visual input recording, identifying, evaluating, only that which is most important for us to perceive consciously. While you drive to work, eat lunch, text your lovers, your brain (archivist and judge) sees things you don’t, continues scanning.

Here in Tucson, situations change quickly from street to street: “estate sale” handwritten on a cardboard sign in a yard full of dust surrounded by mountains and the one to the east looks like a rising moon, a poem

as well as an exercise in attention.

For a while I trained myself to notice the empty flower shop, spray painted graffiti, old concrete foundry between the overgrown lot and railroad tracks, houses rotting, forgotten, places that don’t make or sell or serve any purpose except to await their next assignment in late capitalism’s constant rerouting. My book, Utopia Minus, traces these sites that flicker through a clearing of branches, beyond the “for-sale” sign, before the bulldozers arrive like a sentence unsaid.

Recently I’ve begun writing poems that include the phrase “The Physicists say” as in: “Today the physicists say we might be living in a brane around the event horizon of a collapsed star that gave birth to the universe.”

All of these approaches reflect my struggle to find the right mechanism to record this place/time. As Alice Notely writes: “…now in this moment if I could somehow be held held the/ purpose of poetry of icons of contemplation, is to hold…”

A red rock browns as the sun goes down through the physics of weed grass, and clouds make a clearing for the next moment then swallow it.

For example, physicists have recently discovered a mathematical object that vastly simplifies the calculations required to predict particle interactions. They call it a geometric version of quantum field theory. They call it “a jewel at the heart of quantum physics.” It looks like a gem and replaces the spindling, tree-like Feynman diagrams that required and inspired pages of calculations. In describing the difference, one physicist explained  “using Feynman diagrams is like taking a Ming vase and smashing it to the floor.”

There’s beauty in both vase and shard.

In disrupted environments, scientists study the skulls of white footed mouse, meadow vole, little brown bat collected as far back as a century ago measuring radius and computing power.

I don’t know how wide my view or how quick I process it.

What I see might only be shard, but I stake my claim to this moment on this inventory (no birds at the feeder, no butterflies in the grass), this litany, this Adam’s task with no regard to where the garden ends, this city, this sympathy extends my own set of data, an arrangement of rock, weather, bristling sage, market calculations, my scavenge, my net that catches the click of the refrigerator turning on in another room through its own systems and seasons.

What we know of each other, too, dear reader, is shadow on an event horizon. The boys in Himmel Park stretch a thick green rope from tree to tree to practice walking across it.

Like the white footed mouse, meadow vole, little brown bat I keep trying to rewire my mind, renegotiating priorities, recalibrating, recording, returning to the graffiti on a wall along E. Speedway Blvd. (“The Dow Jones has to freeze”) to haul me into this present

where mountains extend to storm cloud, and one looks like a rising moon from some newly discovered planet where anything is possible (The Dow Jones’s freezes) and everything clamors to be seen and remembered. 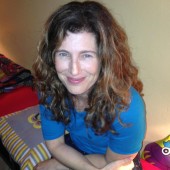 Susan Briante is the author of two books of poetry: Utopia Minus (Ahsahta Press 2011) and Pioneers in the Study of Motion (Ahsahta Press 2007). Briante also writes essays on documentary poetics as well as on the relationship between place and cultural memory. Some of these can be found in Creative Non-Fiction, Rethinking History, Jacket and The Believer. She is finishing work on a new collection of poems, The Market Wonders, inspired by the current economic crisis. Poems from this project have been published in ElevenEleven, Third Coast and 1913 among other journals as well as in the chapbooks The Market is a Parasite that Looks Like a Nest (Dancing Girl Press). Briante is an associate professor of creative writing at the University of Arizona.