Lou is the neighborhood salesman. Whatever you need, from a new stove, to new shoes, even a 30-millimeter camera with one of those professional pods with three legs that real photographers use, Lou can get it for you. Lou’s an older man but it’s hard to tell exactly what his age is. His skin is tight, not saggy like the old men who sit in the park playing chess or checkers and smoking between coughs and curses and raspy tales.

You always know when Lou is coming down the street. The jingling change in his pockets announces his arrival in one of his four suits and endless pairs of shiny snakeskin shoes. He accepts all kinds of payment, including food stamps and even pennies. It is rumored that he once accepted five thousand pennies for a color TV.

Lou lives on the corner of 6th Ave and makes his daily rounds with pit stops at the barbershop, gas station, bible study, and corner bar. Ave-by-Ave he checks in with faithful clients, some happy to see him; others, with long overdue IOUs hanging over their heads, quickly avoiding him. I asked Grace once where Lou gets all of his stuff and she simply responded, “It’s America. The land of the free.” She said this as if Lou were an American icon. She also said we should keep away from him.

On this day, however, there was no keeping away from Lou. Down on my knees, I was frustrated by my failed attempts to outline our hopscotch lines with the edge of a penny when Lou made his midweek arrival. He wore a brand-new, bright red suit with matching red and white shoes, and his main accessory was a Hefty trash bag thrown over his shoulder. As he got closer we could hear the clink, clink of change bouncing around his pockets. The rhythm of his walk fused with the sound of his freshly starched pants, which rubbed together with every step. The bag bounced on his back, causing him to grunt, and when he passed by he presented me with a handheld, electronic Pac-Man game, batteries to go with it, and he gave Prose a Barbie-like dress-up doll. Without even turning his head, he yelled back, “Make sure you tell your mother there’s more where that came from.”

“Zora, it’s him. It’s Santa Claus.” Prose whispered as if she had detected classified information too precious to reveal.

More interested in installing my batteries, I explained, “Prose there is no Santa Claus.”

She demanded, “Zora, he’s our Santa. Not like the round, white one on TV, but a Santa just for us; a Santa for the Aves.”

“Okay. Whatever, Prose, but let’s keep it our secret. Don’t tell anyone in the neighborhood that you think Lou is Santa.”

Every kid deserves a Santa. While I was old enough to know the truth, Prose’s truth was sweeter. That afternoon Lou gave each child in the neighborhood a toy. Grace took ours and demanded that we never accept anything from him again. Prose, convinced that Lou was her Saint Nick, cried to Grace, “He’ll be coming back, probably around Christmas and he told us to tell you there’s more—” I nudged Prose, which is our sign for shut up. She wiped her tears and winked, closing both eyes because she hasn’t figured out how to close just one. A smug smirk spread across her face as she took comfort in our Santa Lou secret.

Not many kids in the neighborhood have the heart to still believe in Santa. With countless Christmases marked by hand-me-down clothes and toys to share, we all eventually discovered that Santa and his reindeer had no intention of landing on the rooftops of the Aves. Prose, always determined to prove folks wrong, found us a Santa today. A Santa named Lou, with two legs for his sleigh, and his very own jingling bells. A Santa with hands that have probably touched every other hand on the Aves. Hands that are the only part of his body that look his age, rough and fat-knuckled, with wrinkles like road maps tracking the comings and goings of an entire neighborhood. Hands like Jesus’ hands, for in Lou’s palms are the sinners and saints of the world. 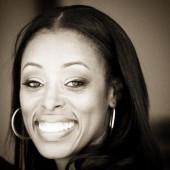 Ryane Nicole Granados is a Los Angeles native who earned her MFA in Creative Writing from Antioch University, Los Angeles. She has also attended the Bread Loaf Writer’s Conference in Sicily, Voices of Our Nation Arts foundation (VONA), and the Squaw Valley Writer’s Workshop. Her work has been featured in various publications including Dirty Chai, Gravel, Role Reboot, For Harriet, The Manifest-Station, Mutha Magazine, and Specter Magazine. She teaches English at Golden West College and has authored a student success manual titled Tips from an Unlikely Valedictorian. Best described as a wife, writer, teacher, and mom who laughs loud and hard, sometimes in the most inappropriate of circumstances, she hopes her writing will inspire, challenge, amuse, and motivate thinking that cultivates positive change. More of her work can be found at her website or on Twitter @awriterslyfe.