He’s hungry. He hasn’t eaten yet today. He sits at a diner counter and orders coffee. He looks at the cinnamon bun under plastic by the counter. It’s the last one. The waitress is old. It’s been decades since anyone wore bright blue eye shadow and lipstick that color in an honest way. Her hair is dyed bright red. Like a cartoon. He asks how much for the cinnamon buns. She tells him they’re three dollars. What if it’s a day old, he says. Two dollars, she says. Two days old? Two dollars, she says. How much is this coffee, he says. She looks at his hands. His nails are all ground down from chewing them at night. His shirt has a stain just under his collar from something he can’t remember. She says, Today all the coffee is free.

He gets up and turns out the light. It’s pitch black in the room and he bumps the corner of the bed before lying down across it. She is gone. It’s just him in the house. With the dog. He can hear the kettle screaming. He doesn’t get up.

It’s early morning and he’s sleeping. The dog scratches her cheek. She scratches it for so long that her cheek starts to bleed. She keeps scratching. She gets up and stretches. She smells blood and then sees it there on her foot, in her nails. She sits down and licks it clean.

When he gets up it’s almost noon. The dog is still sleeping. She can hold it all day if she has to. She has had to before. It was a week ago. He got up and left the house without taking her out. She sat by the door and waited all day. She was shaking when he got home and finally took her out. She squatted and peed a long time.

He looks out the window. The girl in the next apartment is in her kitchen wearing tight shorts and a sports bra. She pulls the drapes closed. He scratches the dog’s head. She opens her eyes.

It’s hot outside. Hot enough to fry eggs on the pavement. He tried to do that once when he was young. His mother caught him and swatted his thigh with the wooden spoon. He stands on the porch. The dog goes into a bush to pee. The mailman is filling the boxes with letters and ads that later will be on the ground.

He’s driving, on the freeway. He has no money but there is gas in the car. A man in a huge truck cuts him off. He pulls up alongside it and rolls down the window. He leans over and sticks out his middle finger. The man in the pickup starts cussing and gesturing, points at the side of the road. He gets behind the truck and follows until both pull over and stop. As soon as the man gets out of the truck, he stomps on the gas. The front wheels of the car spin out and the man has a look on his face like he’s just shit in his pants. He jumps out of the way, into the bed of his truck.

He’s parked at the side of the road looking out at a cornfield. The freeway’s behind him. Traffic is backed up but no one is honking. His car is almost out of gas but he’s got enough to get home. The stalks of corn are eight feet high and the rows push off as far as he can see. He’s been in a corn maze once with his parents a long time ago. It was billed as the biggest corn maze in history. He was running along with his parents behind him. Then he turned around and they were gone. He thought they were joking, that they were hiding around the corner, waiting there for him. A kind of surprise. They were not.

The dog is sitting by the door when he comes home. He lets her out and she shits on the grass. He gets a plastic bag from the counter and goes out to pick it up. She walks with him through the parking lot to the dumpster. A car screams over the curb and speeds at them both. The driver doesn’t see them until he looks up from his phone. The car just misses the dog but she falls down anyway and howls.

There is a big bag of dog food in the house but only wheat bread and milk in the fridge. The dog has eaten and she’s lying down again in the bedroom. He puts two slices of bread on a plate and sits with them on the floor against the sofa. He’s never been so hungry in his life. He eats the two slices and looks out the window at the heads passing by on the walkway. They look to him like bobbing balloons with hair. He imagines that’s what they are. A girl’s head bobs by and she’s chewing gum. She blows a bubble and just when she’s out of sight, it pops.

It’s late. When he took her outside the dog wanted to sniff every bit of bush and grass before peeing but he didn’t rush her. These are small pleasures for her, he thought, and this made him happy. She started back toward the door and then stopped. She looked up the walkway toward the parking lot and then down the other end into darkness. He watched her keep doing this, watched her look one way and then the other, until he put his hand on her shoulder. Then she went back inside. Now she’s lying on her bed with her eyes open. She’s watching him stand in the middle of the room. His back is straight and his eyes are downcast. His hands are down at his sides. His mind is empty. 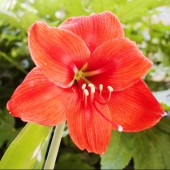 Alex Russell lives in California with his wife and two dogs. He will complete his MA in creative writing at U.C. Davis in 2012.