“It’s a disaster,” came the reply.

Rufus waited for an explanation. He watched the stew bubble and reduce, getting darker and richer. He heard May-Belle shifting around the bedroom above his head. All those familiar thumps of putting on stockings that he hadn’t heard for an age.

Rufus turned the stew off and poured it steaming into two dishes and placed them at each end of the table on wicker place mats, and waited.

Finally, when the steam had stopped rising from the dishes, Rufus heard May-Belle come down the stairs. She appeared at the kitchen threshold with her hands pinning and clutching parts of the dress so that he couldn’t see the full effect. His old May-Belle. Hair like Zelda Fitzgerald, fine wrinkles dripping from her cheekbones, blue eyes ringed with dark blue trapeze-artist eye shadow. The dress was also blue, from what he could see of it, and stuck to the skin like those dresses she used to wear for performances.

“May-Belle!” he said. It was one of the dresses she used to wear for performances.

May-Belle smirked. Her cheeks lifted and the eye shadow crept into all the creases.

“May-Belle,” he said again. May-Belle had become a word for all occasions. He had taken to using it when they made love; it had become his synonym for “God” and “Goodness” and “Miracle”, but also for “Damn” and “Crazy”. “What’re you doing in that?” he said.

May-Belle came out of the shadows of the threshold, the blue mermaid skin catching the light on the ribs, under the armpits, on each breast, and sat down at her place opposite him. Her bony hands were shaking as she put them round the dish of stew, no longer warm.

“What happened to your new dress, May-Belle?” he asked.

“But we’re not going to the trapeze show, May-Belle. We’re going to drinks with Louis and his new wife.”

“I know that,” said May-Belle. “I’ll wear my long evening coat over it. I just like the feeling of it on my skin,” she said.

He relented. Not that there was anything he could do about it. May-Belle had always been a free spirit. So they finished up the cold stew, left the dirty dishes in a bowl of soapy water and went out. They walked, hand in hand, through the evening air and May-Belle had her coat buttoned so that a triangle of the blue dress still glittered on display.

When they arrived, Louis made them both a cocktail and introduced his new wife, proud as punch. And as Rufus sat in Louis’ living room, welcoming the new wife to the neighborhood, something struck him as extraordinary. No other man, he thought, would ever know what May-Belle was hiding under her evening coat. My high flier, he thought, with her secret second skin.

But the thought didn’t disturb him, not one bit, and when Louis and his new wife went to the kitchen to cut more limes, Rufus gave May-Belle a nudge.

“May-Belle,” he said, and stretched the collar of his white shirt away from his neck, revealing for a split second the neon orange of the old leotard. 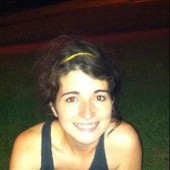