Mel and the Microphones None of them with batteries.

My husband Mel is senile.
Has advanced dementia.
He’s 85 years old.
Used to be a sportscaster.
A play-by-play announcer and a color commentator.
His whole career: Forty-plus years.
Highly respected.
Widely known.

And then there’s me: Karen.
Me: The devoted wife.
My hair gone sheer white.
Married five decades.
Our four children all grown.
Kids of their own.
Busy, living in far off cities.
And me: Still here haunting this old, echoing Victorian.
Me: Left with nothing to do but watch and wait and wonder.
Me: Remembering everything.
Me: My mind still clear, still sharp.
But Mel, he often forgets.
I got the idea to set up the microphones when I noticed him one afternoon talking a mile a minute into one of my hairbrushes.
That’s how this all got started.

And the chicken is cooking, browning, sizzling!
Folks, this is going to be a dinner for the ages!
Oh my, that’s the buzzer: Stick a fork in it—it. is. done!

Before the microphones Mel wouldn’t say two words all day.
But with a mic—or something that looks passably similar to a mic—he’ll talk day in and day out, ‘til he’s hoarse.
‘Til I turn off the lights and go to bed.
And sometimes he’ll keep right on after that.
I don’t mind, even when it keeps me up nights—it’s better than the quiet.
Silence is just so lonely.
Play-by-play, though it’s not conversation exactly, is far better than nothing. Most importantly, it makes me feel like my husband is still here.
Like he’s still alive, still my husband.
At least, more so than I felt during the long, staring, drooling hours before.

They’re on the couch, watching television!
They’ve finished two programs, and I think they might go for three!
What a night folks, what. a. night!

Phil Fleming was Mel’s commentating partner.
They worked together, side-by-side, for thirty-two years.
A long, successful marriage in its own right.
Phil’s dead now, has been for more than a decade.
When Mel gets going, he frequently speaks to Phil.
This makes me sad because it breaks the illusion that my husband is truly lucid—
The illusion that he’s truly talking to me.
But then, so does the fact that he’s commentating on all of life’s little occurrences.
As if they were major sporting events.
As if they warranted this type of ticker tape narration.
Narration that reminds me of the grandkids’ constant, chirpy self-commentary—
On their social media apps, on their mobile devices—
The kind of chatter that says, I’m here, I’m here— The kind that reassures the speaker that she’s alive.
If only because she can hear herself talking.
As if all the little moments—
All the tiny details of your life—
Deserved this type of attention, documentation, broadcast.

This is it folks, the moment we’ve all been waiting for! She’s putting on rouge!
She’s spraying on the Aqua-Net!
She’s taking out her rollers!
It’s all coming down to this, folks!
And she could be—is she—yes—she’s ready for church!

Then again, I sometimes think, maybe they do.
Maybe, when you get to be this old, it really is a heroic feat—
A laudable act, a display of noteworthy prowess—
Just to get yourself up and out of bed, to put yourself on the toilet.
To cook your own breakfast, to dress and feed and bathe yourself.
To stand, and walk across the living room, and open the window to let in some air.

Things we forever took for granted.
Things we considered so very mundane.
Now these are the most that can be done, the best that can be hoped for.
These are our glories, our achievements.
So, Why not, I think.
Why not give them the full color treatment?

They’re sitting in their rockers, hand in hand—been together for fifty years!
In it for the loooong haul, and they could. go. all. the. WAYYYYY!
Oh my, folks, it’s down to the wire—they’re into overtime—
Extra innings—everybody’s thinking about sudden death.
They just don’t know, folks—they don’t know some days if they can go on.
Don’t know if there’s really any reason, if it’s just old momentum carrying them along.
The finish line is in sight, just a little ways off in the distance.
The crowd is roaring—cheering them on, cheering them back, cheering them on!
Like the sound of the surf, like the waves on that great mother ocean:
Roaring them in, rolling them home—calling, calling, calling out to them, folks!
One of these days, folks, one of these days—when that buzzer sounds—
Rolling, roaring, calling them home, roaring, calling them into the abyss, folks.
Roaring, roaring—one of these days, folks—one of these days real soon! 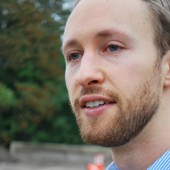 Matt Tompkins has stories published or forthcoming in Post Road, Monday Night, H_NGM_N, CHEAP POP, and other journals. You can find more of Matt's writing by visiting his website, needsrevision.com. He lives in upstate New York with his wife, daughter, and cat.