The boy’s dad always waited until the last possible second to stop for gas. It thrilled the boy’s dad and annoyed the boy’s mom, though really this is saying the same thing twice. We are talking about cars, back when people still drove them. This was even before digital odometers. The boy could hear how empty the tank was when his dad stepped on the gas, like they were churning on air. Eventually the boy’s mom made the boy’s dad get a van with a digital display. But it only increased the dad’s thrill, seeing the zero and knowing he was a mile or two from a station. He would coast up and down the hills those last hundred yards, never touching gas or brake, cackling at the boy’s mom’s whimpering, always somehow making it. How did he always make it?

The boy has his own thing, now that the boy is a man. Of course there are no cars anymore. But here is what he does: he always waits to urinate until he cannot wait any longer, until he is about to burst. Sicko, says his wife. It drives her crazy. Why wouldn’t you go before the movie, she asks when the boy (now a man) stands in the theater to hand her the Big Gulp and the popcorn before slipping by into the dark aisle. His wife pleads with the doctor, tell him it is bad for him, tell him he will rupture himself. Doesn’t she understand him? Doesn’t she remember how long he waited to marry her? How even on that day, when he knew he would finally ask (which was mostly a relic of the past but it was what she wanted), even then, he waited until dark, the night closing in on another day, the train gliding home, her lips stained beautifully, his stomach full and aching, his bladder full and aching, his heart aching, hurting to be full, ready to explode. 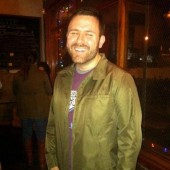 Ben Hoffman's chapbook Together, Apart is forthcoming from Origami Zoo Press. His fiction appears or is forthcoming online at Zoetrope: All-Story, Tin House, Green Mountains Review, and Passages North, among others. He lives in Ann Arbor, Michigan, where he is working on a collection of stories and a novel.