“I think one possibility that we have to consider,” the doctor says, “given that nothing else is really checking out, is that this is some kind of cancer.”

“We can run some tests here. Today, if you have time.”

“It’s pretty straightforward. What we do is run a scope into your bladder and have a look around.”

The room’s air has a tangible weight and pressure, as if we’re sitting at the bottom of a swimming pool.

My throat begins to close.

“Give me a few minutes,” the doctor says. He slaps his knee, stands, and leaves me in the tiny exam room with its hospital-grade fluorescence. A window overlooks the parking lot, but the view is obscured by the top of a palm tree and the liquid Louisiana sun. The room is on the third or fourth floor of the Baton Rouge Clinic. I lie down on the pink leather bed and listen to the building’s sounds: the tissue paper that crackles beneath me, phones ringing in distant hallways, muted beeps and coughs.

I hear the doctor through the closed door.

“Poor guy,” he tells his assistants. “Urinating blood. Could be cancer. No other causes that I can see—no trauma, diet normal, nothing hereditary. Young. Twenty-four, from up north somewhere. Quit smoking but only recently. No changes in exercise. Feels fine, and the ultrasound didn’t show any kidney abnormalities. We’ll do a cystoscopy; get a look at that bladder.”

“We’re going to numb you a bit,” the nurse says. She lifts my gown and I feel something cold on my penis.

She and the doctor stand over me, adjusting the fluorescent light at the end of a long metallic arm.

The doctor holds up an end of the tube so I can see it. “This is going to feel weird,” he says, eyebrows raised in apology and concern. “The numbing agent helps, but you’re going to feel it when we poke through. I’ll tell you when.”

The tube begins its descent into my urethra. I can’t see it and I can’t feel it, but I know it’s there.

I watch the doctor, his eyes fixed beneath my gown, pushing the tube deeper. His short hair stands straight up, thinning toward the top.  His scalp starts to sweat in the sterile light. The nurse puts her hand on my knee.

Once when I was eighteen, I was at a party and someone asked, “Who do you think’s gonna be the first to die?” Nobody answered, but I could tell we were all thinking about it, hypothesizing, picturing one another in open caskets and trying not to make eye contact.

Even after four years of high school, I didn’t know Jake Martin very well. He had small, squinting eyes and a soft voice. He was popular and almost always joking. When he found out he had cancer, he’d been having a text message conversation with a mutual friend of ours. “Gotta go, got cancer,” he wrote. That was his attitude about the whole thing.

I saw him get sick and then get better and then get really sick. Then I went off to college. When I came back to visit one day, I went to his house with some other guys from high school. They said they wanted to see him before the end. It was snowing. I was surprised how little he’d changed since I’d last seen him. He looked healthy. Tired, but healthy. I guess that happens when you give up on chemo and your body tries to grow back but can’t grow back all the way. So we’re sitting in Jake’s room and it’s quiet because we know he’ll be gone soon and then Sean asks if he can buy some of Jake’s OxyContin. Jake says sure. I find out he’s been selling his pills for $80 each to anyone who wants them. I wonder what he’s planning on doing with all that money.

That’s the last time I saw him. The night he died it was still snowing. I thought about death and how we weren’t too young for it anymore.

“Almost there,” the doctor says. “This is the part that’s going to pinch. We’re getting through the bladder wall…now.”

The nurse tightens her hand around my knee and I let out a sound that can’t be classified. I squeeze my fists and tear clumps of tissue paper from the bed with each hand.

“We’re in,” the doctor says. “I’m going to run some water through to inflate your bladder. We’ll turn the lights on in there and see what’s going on.”

The doctor starts the water. My whole body shudders as I feel myself pissing in reverse.

“It can just happen sometimes,” the doctor says. “There’s not always an explanation.”

I’m sitting up on the bed, my jeans back on now. There’s blood on the tissue paper and the flesh around my hips is locked in a cramp.

“But it’s not cancer. Come back in six months. I want to keep a close eye. They’ll get you situated at the desk on your way out.”

I lie back down, press my hands against my eyes and exhale.

“Congratulations, by the way,” he laughs. “Go out, get all the cocktails you want. Celebrate.”

A late-summer sun churns the humidity above Perkins Road. The buildings are low and there’s garbage on the sidewalk. Traffic stops and starts. I’m in the clinic parking lot, sitting in my black Volkswagen. The air conditioner blows hot air and I sweat and stare at the lines of cars.

I think about how life changes and changes back.

I think about how somebody told me that Jake was watching TV with his mom when he realized it was time. He leaned over on the couch, oxygen tank at his feet, and said, “Where’s dad?” A few moments later he was gone.

I think about the doctor and his detachment.

I rest my head on the steering wheel’s burning leather and I sit there, letting myself feel it. When I get home I’ll call my family to let them know that I love them. That I miss them. That I’m still here.

But for now it’s enough to put the car in drive, to look both ways, to arrive again in this boiling stop-start world. 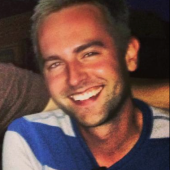 Ryan Rydzewski is pursuing an MFA in nonfiction writing at Chatham University. His work has appeared in Collision, The Teaching Times and Three Rivers Review. He lives in Pittsburgh, Pennsylvania.