He slipped his name inside her pillowcase.

When she turned in her sleep, his name branded itself on her cheek, an invisible mark.
It leaked through her cheek into her mouth. She tasted him, and his name made its way to her stomach, became part of its lining.

When she curled the pillow to her breast, his name seeped through her skin, a tattoo deeper than flesh, imprinted on her bones and ligaments, trickled into the marrow, made itself home.

The syllables of his name, its onset and rime, crawled up her nose and sinuses, into her brain, whispered his songs from inside her ears. Its nucleus and coda tickled her, drove her insane.

His name possessed her, coursed through her surging, feverish blood, colonized her aortas, membranes, veins.

She searched for him next morning, looked for him in the dip of his pillow, the cold side of her bed, the upturned carpet where he’d stumbled in the dark. She called for him down the stairs, gathered her woolen robe to accost him in the kitchen.

On the way down she tried to remember what had woken her. Her daughter called just then, the two syllables of her name. Mom-my. /ˈmɒm.i/, as he would have said. She smiled at the way he’d described love-making to her last night, with all its slow vowels–how it could become rough-making, or laugh-making, if they replaced a phoneme or a slash here or there.

Her daughter called again, louder this time. The sound turned her body from the stairs, drawing it towards the toddler’s room.

She soothed her daughter’s curls and her dreams; carried the half-awake bundle to the kitchen to warm some milk. Not finding him there, she set the kettle to boil, murmuring to her daughter, calling her made-up names with round, gurgle-y sounds. Phonemes-shonemes, all his phony claptrap. Maybe he’d gone out to breathe in the chill, and would come back to crack a homonym joke.

With her daughter fed, she showered, and tried to remember his name. What had she called out when he came to her, at her, with her? He’d talked about the difference, making her laugh. She didn’t have his number. Maybe he hadn’t felt what she’d felt in her drunken haze, like being in a plugged-in spider web that singed the down on her arms, set her hair crackling on the pillow when he combed it out for her. She checked her arms—still smooth but going to fat. She checked all of her body while drying herself, but he’d left no sign.

She dressed, her fingers clumsy with the effort to keep them steady: couldn’t let his disappearance ruin her day. She didn’t notice the button she’d ripped off his shirt lying under the wardrobe.

Over the winter, the button sank into the dust, and settled.

His name in her pillowcase crumbled, and bits of paper clung to the pillow. They did not reach her—not when she snuggled into it alone, warm under the sheets, nor when another head joined hers.

The syllables of his name broke down into phonemes, and disappeared. 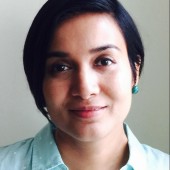 Damyanti's short fiction has been commended at the Bath Flash Fiction award. She's published at Bluestem magazine, Griffith Review Australia, Lunch Ticket magazine, The First Line and other journals in the USA, UK, and Singapore. Her work is anthologised by Twelve Winters Press, USA (Pushcart Nomination), and by major publishers in Malaysia and Singapore. Her debut novel in progress is longlisted for the Mslexia Novel Competition, 2015.