It is the pushing-swells from deep within that finally send Anna from the white room where a man in glasses speaks of the treasures held within the museum. First she notices perspiration on her forehead, upper lip, a slight trembling in her legs causing her to unlock her knees and shift her weight upon her heels. Sweat starts to trickle down a pathway along her back and she feels moisture from her thighs dampening the edges of her underwear. The first wave pushes up and she wills it down, focusing on the picture ahead of her: Nighthawks. She stares at Hopper’s corners and the angles, the way the window cuts the light, the green darkness outside on the city streets, and the woman at the diner counter, hat at an angle, makeup perfect, caught up in the brightness, her fingers just grazing the man’s next to hers. Fluorescent light pours down on the couple. A man works behind the counter. The woman looks bored, but she is in the light and not on the street. She is not standing in the green darkness of the night.

At the second swell Anna pulls her purse tighter to her core and retreats to the back of the room, down the hall, out the door, breathing coolness in relief, pulling its dampness into her lungs and forcing it through her body all the way to the womb.

She faces the night. Darker than she expected. Wet. It must have rained. The lights flow along the black streets in river-like corridors, like drips of water down a window.

Once upon a time she had learned about prisms at her grade school. A white-haired woman held a triangular piece of glass and explained how it could cut white light into cords of color. Then she shined a light on it and a rainbow appeared against the opposite wall. I know that feeling, the then-girl thought, feeling the core of her being vibrate and tighten, vibrate again and threaten to divide and separate from itself.

Maybe it is the pressure from within, pushing up against her heart, lungs: water filling her mouth. She thinks away from what she feels; she thinks about putting one foot in front of the other: heel-toe, heel-toe. Her ankles rise off her three-inch heels and tendons pull in a tight line as her calf muscles scissor across themselves. It helps to imagine walking on a beam. She concentrates on her posture, her shoulders, her eyes, following a straight path. She listens to the hollow sound of heel hitting pavement, a knock she hears below her feet and then again somewhere else in the air. Oh, I love to hear that, a blind, homeless man once said as she walked by him on the sidewalk, that nice sound of a woman. He had smiled into the sky.

And now she will go back to the apartment she shares with a man who won’t be home for many, many hours.

She stares at the light on the wet streets.

Another wave rips and swells like memory from her depths unto her throat. Water in her mouth again. Her stomach clenches and she doubles over by an inch. Perhaps it is a reflex, or perhaps some ancient instinct that makes her breathe into the fear this time while she presses her core with her hands.

It will be okay, she assures herself, and focuses on the light. 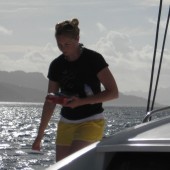