On this particular winter evening in Springdale, Ohio, George Lereau sat and watched LG across the table. LG was an overweight guy with a clump of hair right in the center of his head, a long obnoxious strand, swooping up and diving down across the bridge of scalp. He appeared during the tough times, the crisis moments, birthdays, anniversaries, showed up to laugh at George, tell him jokes, sometimes to cheer him up, remind him that escape was good, drugs and gin were good, but only to a limit. “He gets my shit together,” George would say to Pete or Mumbles or Hook as they stood in the food line at St. John’s.  LG said things like, Asshole, pull your face out of the toilet bowl. Or Good god! Wash the vomit out of your hair. You were somebody once. Sometimes George wondered what he’d do without him. Maybe he was a demon, maybe a bit of bad potato. It was what it was.

So there they were, George and LG, sitting at the small table in the kitchen of the dilapidated apartment in Springdale, Ohio, staring at the letter. George flicked the envelope with his middle finger. “Mr. Big. Mr. Slaughter, Esquire, himself,” he said. “Mr. Represent the-thugs-and-turds-of-the-world-and-make-a-fortune-and-write-your-pulpy-lawyer-fiction-crap.” George could feel the confusing emotions of sorrow and rage knocking together, at first an annoyance, like someone tapping on his back as he waited in the food line.

LG said, Think of it another way, brother. If the Big Man were not so successful, he wouldn’t give you money and you couldn’t buy your drugs. You need the shitheads around. They keep the losers like you together.

He had a point, although George took issue with the loser reference. He had tried to explain to LG losers do not get on national TV shows like The Island and The Island Reunion.

“I have a long list of credits,” George said to LG. “Five years on daytime drama, baby. They didn’t drop me. They dropped the whole damn show. Remember Gladys from Minnesota?”

“She was heartbroken when they cancelled the show in midseason. She started binge eating.”

LG just smiled at him and said, The market always survives. Twinky and Ho-Ho sales are through the roof. Somebody always benefits from other’s misfortunes. That’s the way of it. George pondered his statement and drank another glass of Beefeaters with ice. He was always dropping zingers like that. He had used all the tonic, all the limes, and this was the last of the ice. He was broke and the electric company and landlord had had enough.

“That’s not necessarily true,” George said, pointing his finger at LG, cocked like some cobra ready to strike. “There are things that nobody benefits from.”

“Death,” George said and smiled. “The great equalizer.” He sipped from his glass triumphantly.

Bullshit, LG said. That’s the biggest con of them all. Funerals and caskets and creepy guys in black suits who whisper in soft voices asking if you’re okay, touching you and rubbing you on the back. All for what? A con! They play their role, do their dance, make a fortune on a wooden box, and fire up the damn backhoe while you drive your pathetic ass down the winding pavement. And that cremation bullshit! What’s with that? How the hell do you know what that black soot is? Could be ashes from the damn barbeque they had that afternoon. Charcoal, my brother. A shiny, overpriced porcelain shrine made in China with bits of chicken and charcoal in the bottom. Death. Damn are you stupid.

George stared at him, his animated gestures, waving arms slapping the small table in the rented apartment. He hated him sometimes. “Not all,” George said. “Not all of them.”

LG looked at him and shook his head. Naw, you’re right, brother. Not hers. Of course not Lilly’s.

“Listen to you.” The kitchen was a nutshell, one step and George stood at the refrigerator. He pulled out the single tray and filled it at the stainless steel cup of a sink, spilling half as he put it into the top shelf of the freezer. LG and George stared at the three-fold note resting upon the business envelope. George sipped from his drink, the ice sliding into his upper lip. He put the glass down and filled it again.

“You know I had a chance to make some real money once.”

“They called me once.”

Sure, they did. They got a phonebook filled with dumbass has-beens. They pull it out when the ratings are low. Let me see. LG fingered an imaginary book, flipping through the pages, staring down at it like he was looking through a pair of reading glasses. F, no we’ve got too many of them. G, those look promising. Oh, looky here. Under the L’s. Remember this loser? Perfect. Listen here. It says he’s so fucked in the head that he’s been committed, been out of rehab twenty or more times, picked up in four states for public intoxication. What’s this? Makes imaginary phone calls to heaven? What the hell is that? LG looked up at George. He’s such a sorry ass human being, I’ll bet he doesn’t even have ice.

“For real. You know half that reality TV gig is acting.”

“I’ll bet it is. That poor sonofabitch in the wheelchair should win the academy award.”

“Real money,” LG said. Hard earned cash in the pocket. Not like this bullshit. He pointed to the letter.

What are you going to do, brother?

George looked up at LG, LG’s eyes narrowing, face crinkling the way it did when he was concerned about him. “I guess I’ll have to go.”

“You’re crazier than I thought. What the hell you gonna do in the North Pole?”

“I went there as a kid. The Slaughter House. The Old Man was so proud of that place.”

Bring a gun and a seal skin coat.

Polar bears. I saw a nature show once. Those damn things are mean as hell. They look all white and fluffy, but they’re mean as hell. They’ll track your ass for days. They pull kids from the porch and run off! Could you imagine? You go outside to find your little girl, and. . .What the hell? Blood and guts and shit. They look so cool and friendly in the zoo.

George stared at him, his mouth open just a bit.

Sorry, brother, LG said with that crinkled brow again. It’s just I don’t want to be eaten by no polar bear.

“It’s Maine, you idiot. There’s no polar bears there. That’s further north, the Arctic or something. I remember when the big man bought the Slaughter House. I remember the long drive through the snow and woods. My mother didn’t want anything to do with it, said he bought it with blood money. It was right there on Moose Head Lake. God it was strange, so huge back then, like its own universe. I haven’t been there for years…” George took a long gulp and finished the gin.  He munched on the remaining ice cube. They were silent for minutes on end.

How the hell do you drown anyway? LG said. I mean, what, you breathe in water?

“I don’t want to talk about this.”

And he’s left you a shit load of money. That’s something.

George stared at LG, then at the letter. “Who does this? Who writes a letter like this?”

The Big Cheese does, that’s who.

Better bring a shovel to the North Pole, brother.

“It’s Maine.” George flicked the letter again. “They’ll all come for the funeral.”

The best parts of life.

“I’ll probably inherit it all, the Slaughter House, the royalties, the whole bit,” George said, picking up the empty glass and rolling it in his fingers. “And they’ll all be there after the funeral. And they’ll all want the money.”

Maybe you should pack that gun.

You need some ice cubes and a shower.

George lifted the bottle of Beefeaters to his lips and drank. “Greyhound go out that way?”

This is rich. Look at you, LG said, arms wide, that large mouth swooping up at the corners, a hint of teeth. He really needed to change that blue paramedic uniform, that filthy, food-stained t-shirt beneath. The old man dies and now you want to be a tourist. You’ll end up in Barcelona.

“I was in Barcelona once.”

“They’ve got the best dope there.”

Then let’s go to Barcelona, LG said. Screw this North Pole shit. Screw this secret letter and a million dollars bullshit and just get some damn ice cubes. This will not end well, brother. You know this.

“Maybe.” George stood up and rummaged through some stacked books, magazines sliding onto the floor. He opened a drawer and pulled out a phonebook. LG just sat and watched him, shaking his head. George picked up the phone. No dial tone.

Oops, LG said, That’s right, you haven’t paid your phone bill in three months. No phone, no food, no damn wife, no damn kid, and no ice.

George turned to him. “What do you want from me? What?” He moved toward LG, but the phone cord pulled him back. He grabbed it, the cord taut, something dark surfacing within him, something overwhelming, heavy like earth. George tugged at the chord until it gave way. He held the phone in his hands, then let it fall to the ground.

George sat back onto his chair, chest heaving, T-shirt stained from the gin. He grabbed the bottle and took another swig, then put it on the table near the letter.

What the hell does a swimming accident mean? LG said.

“I don’t want to talk about this.”

Maybe he just choked to death, like on a piece of ham or a fishbone.

“Please.” George eyed the freezer, then the letter. “They’ll all be there. I’m not going.”

You got a letter.

“This would change things.”

This would change a lot of things.

“This could make it go away.”

It would help, LG said with his crinkled brow. It would buy a lot of ice.

You sleep now, brother. The ice will be ready soon, and we’ll go to St. John’s for dinner. It’s fried chicken tonight.

George pushed the letter forward and rested his head on his forearm. “I’m just so tired is all.” As he drifted off, he could hear the cars outside as they honked and buzzed by his window. He thought of the people in those cars as they headed home from work, headed to their families. He imagined a man stepping out of his car, his little girl meeting him at the door, the bright smile of his wife kissing his mouth, the smell of clean air and clean wood and clean walls, the bright sun streaming into the foyer. When George awoke there would be ice. 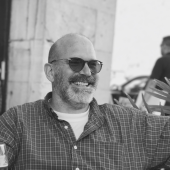 Greg Belliveau received his MFA in Fiction from Pacific University and is a 2002 Christy Award finalist for Best First Novel, Go Down To Silence (Multnomah: A Division of Random House, 2001). He has written non-fiction: Say to This Mountain: The life of James T. Jeremiah (RBP, 1999). He is also the Senior Fiction Editor at the nationally known Silk Road Review.