Not Dark Yet: Another Look at Bob Dylan My Bob Dylan epiphany came on November 22, 1963. President Kennedy had just been assassinated. School was closed and I sat with a fellow student, a young woman from the south who played some renaissance music. Then I saw the “Freewheelin Bob Dylan” album cover, Dylan walking down a New York Street, long-haired, smiling Suze Rotolo clinging to his arm. The shot recalled the photo of James Dean walking through a rainy Times Square. I played the album, and the first song was “Blowin’ in the Wind.” It was too perfect for the moment, a song that asks nine questions about the human condition that can never be answered:

“How many roads must a man walk down/before you call him a man?”

A year later, I saw Dylan perform in San Francisco. Out came Dylan in jeans, boots, a leather jacket, playing only his guitar and harmonica and singing in that bluesy ethnic voice, the first of many voices Dylan has used over the years. Songs from that concert that became iconic were not yet recorded: imagine hearing “Tambourine Man,” “It’s All Right, Ma,” and “It’s All Over Now, Baby Blue” for the first time. How could someone so young be writing these brilliant lyrics? Dylan seemed vulnerable on stage, shy, even surprised at the audience’s raucous approval and applause. Joan Baez joined him on stage and the coronation was complete: the king and queen of folk music had emerged. Many of his songs from that concert like “Times They Are a Changin’’ belong to that 60’s era, but so many others have stood the brutal test of time.

The following year, I bought a guitar and learned how to play many of Dylan’s songs. They may seem simple with only a few chords, but to get Dylan’s effect takes skill, as he uses different chord positions, fingering and alternate bass runs. Dylan loves the F chord, hard to play on a guitar without a capo. Dylan often uses open tuning where the guitar is tuned to a chord. Of course, it’s Dylan’s power as a writer that matters. He can compose a song that might cause one to pull over and take a deep breath. “Not Dark yet” is such a song, capturing the essence of growing older.

“Sometimes I wonder why I should even care/ Not dark yet but it’s gettin’ there.”

If Eliot’s Prufrock measured out his life in “coffee spoons,” I could state that mine has been measured, to some extent, by Dylan concerts over the decades, each with a different Dylan: maverick folk singer, rock and roll rebel, gospel singer, country crooner and elder statesman. I even had some success playing Dylan songs in San Francisco coffee houses until his music became too popular and therefore expected. Everyone was playing “Blowin’ in the Wind.”

When Dylan went electric at the 1965 Newport Folk Festival, there were boos and cries of treason from left wing folk purists. Acoustic folk was “authentic” and “pure.” Rock and roll was “commercial.” Dylan admitted he was hurt when he heard that Pete Seeger, a folk singer icon, wanted to cut the cable during Dylan’s performance of an electrified “Maggie’s Farm.”

A motorcycle accident took Dylan out of the public eye. When Dylan finally reappeared and released “John Wesley Harding,” an album of folk song parables, it was as musically simple as the Beatles’ “Sgt. Pepper’s Lonely Hearts Club Band” was complex. I first heard the album while in the hospital recovering from a serious illness, and one song, “Along the Watchtower,” seemed to describe my situation.

“Let us not talk falsely now/The hour is getting late.”

In 1975, Dylan released “Blood on the Tracks,” considered by many to be his best album, if one can select a “best” from so many. It’s an album about a bitter divorce, and to Dylan’s surprise, all his pain made for a popular album. It has four songs that continue to resonate for me: “Buckets of Rain,” “You’re a Big Girl Now,” “Simple Twist of Fate,” and my favorite, “Tangled Up in Blue,” a dramatic song Dylan has rewritten many times.

“And I was standin’ by the side of the road/ Rain fallin’ on my shoes/ Headed up to the east coast/ God knows I paid some dues gettin’ through/ Tangled up in blue.”

The album remains poignant and popular because Dylan turned his pain into sublime art.

In 1978, Bob Dylan faced outrage from secular fans when he became a born again Christian and produced the moving gospel album, “Slow Train Coming.”  When he performed in the San Francisco Bay Area, Dylan refused to play his old songs. His set list featured only his new songs about Jesus, and soon, a horrified secular audience of Berkeley Marxists and San Francisco latter day hippies began shouting and booing, just as they did when he went electric in 1965. Dylan dug in and defiantly shouted back:

“You want an old song? How about a song about Jesus Christ? Is that old enough for you-uuu?” To another heckler who shouted, “Where’s Bob Dylan?” he replied, “Bob Dylan left the building. I’m his replacement.” Dylan even lectured the audience about their impending banishment to hell if they didn’t see the light. To add to this theatrical scene, a group of born again Christians pointed to the ceiling and voiced their hallelujahs. There was a great moment in what the critics blasted as the “God-awful gospel according to Bobby” when Dylan sang “When He Returns.” With Dylan’s emotional performance, even this cynical audience was hushed into submission.

I left the Warfield theatre determined to find another source of musical guidance. For me, Dylan was finished.  About a month later, I bought the album.  “I Believe in You” is one of Dylan’s most heartfelt honest songs. The following year, Lou Johnson, a classical guitarist, suggested we see Dylan when he returned to San Francisco. I resisted.

“The gospel tunes are good, but I don’t feel like sitting through two hours of just those songs.”

I decided to attend.  This time, Dylan mixed his classics with the gospel tunes and gave a memorable concert, playing both guitar and piano, and adding a long acoustic encore. Once again, a magical spirit moved beneath the waters. To thunderous applause, Dylan simply wiped his face with a towel and left the stage.

Dylan seemed to fade during the late eighties, but “Infidels” and “Oh Mercy” suggested a comeback. Many famous musicians gathered to honor Bob Dylan’s forty years in music at a special tribute concert in 1992. Perhaps they assumed Bob Dylan had finally reached the end of that road and why not give the old guy a nice send off? The concert ended with Dylan, backed by the crème de la crème of popular singers, performing his bittersweet “Knockin’ on Heaven’s Door.” It seemed a somewhat symbolic choice.

“Wipe these tears from my face/I can’t see through them anymore.”

It was Dylan’s near death due to a viral heart sac infection that brought him to the forefront of the news yet again. According to David Gates in a 1997 cover story for Newsweek, “the death scare reminded us that Dylan was a major cultural figure—and that we won’t always have him with us.” That same year, Dylan released “Time Out of Mind,” a dark brilliant album that approached his celebrated “Blood on the Tracks.”

Now “The Old Master,” Bob Dylan continues on that “Never Ending Tour.” Dylan describes the loneliness of the road in his long and paradoxically poetic “Ain’t Talkin’”:

“I practice a faith that’s been long abandoned/ain’t no altars on this long and lonesome road.”

Dylan’s concert in 2000 at Idaho State University’s Holt Arena illustrated why he was Bob Dylan. Dylan was inspired and inspiring, and my late wife, Karen, who never understood my Dylan obsession (“That pigeon-toed gnome with the frog’s voice is your hero?”) finally heard and felt the Dylan magic.  The audience stood for “Like a Rolling Stone,” reminiscent of audiences standing for the Hallelujah chorus from Handel’s Messiah.

The last Dylan concert I attended—number nine—was in Jackson, Wyoming, in August of 2010. The audience, standing on the dark hill of a ski resort, was varied and enthusiastic.  Bob Dylan seemed frail, the voice now a catarrhal growl, the songs—including some decades old—still resonating. Dylan hovered stiffly behind the organ, stepping out once to play the guitar. Backed by the band, he also sang the biting “I Don’t Believe You,” Dylan blowing notes on the harmonica and even swiveling his hips like an old vaudeville performer. If his performance lacked the fire of ten years earlier, all the old arguments about whether or not Dylan was even a singer or a sellout or unhip for a younger generation seemed irrelevant. I recall three young women, their arms locked, swaying to Dylan’s “Spirit on the Water.” Dylan closed with “Like a Rolling Stone.”

The four-stanza “Dark Eyes” may capture what it’s like for Bob Dylan himself as he travels from town to town.

“A million faces at my feet/All I see are dark eyes.”

In 2012 at 71, Dylan released “Tempest,” an album of songs stripped down and simple and yet expansive with their poetic venom, defiance and even nostalgia if one considers his Celtic flavored title song about the Titanic disaster.  As Dylan sings, “I ain’t dead yet, my bell still rings.” His recent release is “Shadows in the Night” (2015), an album of songs covered by Frank Sinatra. (Dylan prefers to say he is “uncovering” these songs.) For a singer criticized for not having a commercial voice, Dylan has found an intimate husky croon that ironically fits these nearly forgotten Sinatra classics originally sung by one of the greatest 20th century commercial singers.

Bob Dylan continuously has power to astonish and charm us.

The road began in 1961 when Columbia Records producer, John Hammond, saw a latent genius in the 20 year-old Dylan singing blues songs in an old man’s voice. Perhaps Bob Dylan will continue to find poetry on those “ancient empty streets too dead for dreaming.” 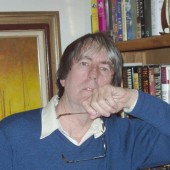 Michael Corrigan was born and raised in San Francisco, California. He holds an MA in English from San Francisco State and attended the American Film Institute to study screenwriting. At the American Film Institute, he wrote screenplays for student videos and attended many seminars led by professional film directors and producers. David Shaw became one of his mentors. He taught English and speech communications at Idaho State University. His books include Confessions of a Shanty Irishman, a hybrid memoir, A Year and a Day, a grief memoir published by Idaho State University Press, and These Precious Hours, a collection of connected stories and now an audiobook read by Alex Hyde White. Three other books are available as audiobooks. Mulligan, a novel about—in part—the Irish in the Civil War, is his most recent book. Corrigan was nominated for a Pushcart prize for the short story, “Free Fall.”