The Old Woman and Her Dog Each morning, the old woman walked past our house with her Yorkshire terrier. And in the afternoon, she returned with her little dog. She always stopped at the end of our driveway where her dog barked. The scruffy animal barked and pulled its leash. That was how we knew about the old woman and her dog. We stopped whatever we were playing, ran to the driveway, and waved. But the woman pulled on the leash and yanked her dog away from us. The dog kept barking as the woman walked towards her house, which was on the corner of a block on the other side of our street.

We didn’t think too much about the old woman until the end of that first summer, when I was heading into the seventh grade at Brown Middle School and my family decided to have another barbecue. Uncle Seyha landed a new job working at a lumber company up in Shrewsbury. He invited friends over to celebrate the end of summer and his new job.

Food was prepared the previous night and finished early that morning. Cars with license plates from Revere, Lynn, Chelsea, and Lowell were parked along the public streets. Everyone was eating, laughing, and drinking. Uncle Ly and his friends were singing karaoke in the living room. My cousins and I played hide-and-seek in the yard. Then we got bored and climbed the giant willow tree next to the swing set that came with the house. When our stomachs growled, we went to Uncle Paula, who was grilling meat under the crab apple tree in the backyard, and got ourselves some pork or spiced beef on a stick and a can of ice-cold Coca-Cola from the red cooler. Later, we got really hungry and went inside the house and each of us got a bowl of rice soaked in sralauw with chicken. We sat in one of the bedrooms on the first floor, watching the adults smoking and talking about politics, how there were still Khmer Rouge in Cambodia’s government and Hun Sen, the Prime Minister, was a former Khmer Rouge leader.

Then the doorbell rang.

When Aunt Bonavary saw the policeman at the door, she burst in tears. With his dark uniform and a gun strapped to his waist, he was the authority figure, and for my aunt, authority meant Angkar, the Khmer Rouge government that took away her uncle and brother and starved to death her sister, murdered her friends and neighbors. She ran out the backdoor, eyes wide, crying, and into the backyard, warning her family and guests that the police was at the door. Uncle Seyha went to the door, smiled, and nodded. He said politely, “Welcome to our house, officer.”

The policeman explained his presence. “Dogs were reported missing in the neighborhood,” he said. “I need to search the premises.”

The policeman walked through the house. He scrunched up his nose as he smelled the tripe boiling in the big pot. He looked at it and asked, “What’s that?”

“It’s cow, sir. Stomach of a cow,” my uncle explained.

The police officer went out the backdoor, walked around the yard, and checked the trash bins under the stairs. He found nothing. He walked down the driveway, got in his patrol car, and drove away. Our neighbors looked on from their perfectly manicured yards, even after the police cruiser left.

My uncles and aunts were red-faced. They tried to resume their celebration, returning to the karaoke machine and Aunt Bonavary singing to entertain the guests. But it was no use. They had lost face in front of their friends and neighbors. Aunt Bonavary sang as if she were weeping. And we children left the quiet faces of adults and sought shelter in the cool shade underneath the old willow tree. 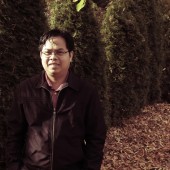 Bunkong Tuon is a writer, critic, and associate professor of English at Union College, in Schenectady, NY. “The Old Woman and Her Dog” is part of a semi-autobiographical novel in progress. He is a contributor to Cultural Weekly, as well as the author of Gruel (2015) and And So I Was Blessed (2017), both published by NYQ Books.