On Place, Privilege and the Power of self-awareness I was in 8th grade when I read Gone with the Wind. The book had a sexy cover: a black-haired, busty, white beauty in a 19th century dress struggled against (or towards) a dark-haired mustached man, who leaned over her with hooded eyes. I felt like I had found a treasure. How did this book slip past the librarians? I shyly checked it out, avoiding the librarian’s eyes. I kept it in my bag until I was home and safely under my covers.

Needless to say, it was not the erotica that I had anticipated.

I rolled my eyes at Scarlett, who was so manipulative, indecisive, self-centered and entitled. Whiney and uninteresting Ashley evoked my exasperated sighs. And, Rhett was the only amusing character. Admittedly, I got a twisted satisfaction from his acerbic interactions with Scarlett (problematic gender interaction? sure, but let’s not dwell on that now). I remember being struck by the way the author seamlessly integrated slavery into the beautiful landscape of Georgia. I vaguely recall being annoyed that Mammy’s speech was difficult to understand. I tried to read her words out loud to make sense of them but eventually skimmed through her lines, instead, finding context around them.

It’s strange remembering this now. I find myself using a strainer in an attempt to separate the sentiments and thoughts of Current Grace from those of 8th grade Grace. I don’t think it’s possible to do that. I could discuss the way that Mitchell’s juxtaposition of the lush and utopic pre-Civil War South with the tragedy and disillusionment of the reconstruction era reinforces the entitlement embedded in a system of white supremacy. Yes, but 8th grade Grace would creep in, strolling among the library aisles during lunch hour. Displaced, because being Haitian excluded her from African Americans and being black excluded her from white Americans. (She hadn’t yet learned how to use irony like High School Grace nor was she equipped with the socio-cultural self-awareness of College Grace). They are all entangled: 8th grade Grace, Current Grace and all the Graces in between.

I have learned that the present is never divorced from the past, nor is personal experience from social history.

So, I can’t begin to discuss Vanessa Place and the racial dynamics of America without addressing that I have a different history with blackness than African Americans. My slave ancestors violently revolted against our white French masters. As a result, we became both victorious and massively indebted to France: a paradox that has embedded pride and shame in Haitian identity. My country’s contemporary fight with white supremacy is a subtle one, hidden under perpetuating economic turmoil.

This is distinct from African American history. Though my dark skin may grant me the same the demographic status of “African American or Black” as my best friend, Genisia, I can’t begin to understand what it feels like for her to be second class in her own country. What it’s like to fight through the asexual Mammies and the sexualized Isadora Duncans, meek Uncle Toms and militant Malcolm Xs in order to establish an identity as African American woman.

There is a beauty in that—in sympathizing with my friend’s history but acknowledging the uniqueness of her experience as an African American. In realizing that even though I am considered “black,” I still have the privilege to distance myself from “African American” and the socio-historical-cultural weight it carries in America.

I believe this is what Vanessa Place’s Twitter exhibition lacks: self-awareness. It would be easy to dismiss the anger of those offended and defend the rights of an artist to express herself. But, pardon me, if I point out the naiveté of that argument. Try as one might, one cannot separate art from the historical and cultural framework it inhabits. And try as she might, Vanessa Place cannot separate the social impact that she is trying to provoke as an artist from her personal privilege as a white woman. The actress Hattie McDaniel was used as the profile picture, the banner was a colorful caricature of a fat-cheeked smiling Jemima. By doing this, Place dehumanizes McDaniel, stripping her of her entire biography and reducing her to an asexual servile caricature of black femininity. Through Twitter, Place created contemporary reification of racist ideology. She used the corpse of Hattie McDaniel, sewed it together with Jemima cartoon, gave it the voice of Mammie and propped this racist monstrosity on the social media stage for the sake of the provocateur theatrics of her conceptual art.

Socially and historically she has the privilege to do this.

To her, Jemima was never an image she had to internalize. To her, Hattie McDaniel was not a controversial female role model whose Oscar award for the role of Mammie evokes both pride and shame. She can separate herself from this contemporary blackface and call it art. She can use the historical pain related to such figures as artistic currency for her big social stand against—can you believe it?—copyright laws. Yes, copyright laws!

To answer why she used Hattie McDaniel, Place says, “I use the violence of my culture in my art.” Yes, Place, but to whom is this violence directed? This kind of self-aggrandizing glorification of her conceptual art, reveals immaturity and an inability to unpack her own privilege. Yet, in the midst of my profound anger, I understand that there is something inherently ignorant about her provocation that undercuts her conflicting pseudo-intellectual responses in this recent interview at The Stranger.

There is nothing beautiful, artistic, facetious or inspiring about calculated cultural violence. I wish I could tell that to my Middle School self who found Rhett’s sexist and abusive tendencies charming. Or to my high school self who used irony as a shield against Haitian stereotypes, who did not realize that irony is a double-edged sword that cuts deeper going in than going out.

I have learned it takes humility to examine oneself. It requires courage to face how one’s personal history complicates one’s interaction with the bigger social history. And it takes compassion to acknowledge another’s pain and wisdom to handle with care.

Place, trust me. Those are much more provoking than cultural violence. 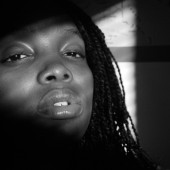 Born in Haiti, Grace Jean-Pierre arrived in America with her family when she was seven years old. She recently graduated from University of South Florida with dual degrees in Creative Writing and Behavioral Healthcare, marrying her love of writing and her passion for psychology. Her fiction, poetry, and essays usually feature this intimate marriage. Her story "Espwa," also featured on Atticus Review, recently won the Hurston-Wright Founding Members Award for College Writers.