The grandmother in bed with her eyes closed makes that noise because all of her saliva is trapped in her throat, barricaded not by a fence but a large, unmovable stone. The daughter in law who only calls her mother in law “mother” makes that noise because she has been weeping two days without sleep. The daughter in law who I call “mother” can’t communicate what she wants to ask of me; through a combination of unordered words and gestures I understand, I think, that the grandmother is very uncomfortable, even though she can’t say so, because her bottom is infected.

The father enters the bedroom and I look at him as if to say, “I don’t know what she wants from me.” He nods and I leave the room. He closes the door and after a moment emerges with a translation. “Go see if you can find one of those pillows people with hemorrhoids use. I think she would be a lot more comfortable with one of those.”

“She” is the grandmother. Every utterance of the word “she,” no matter how far away from the subject of the conversation, has referred to the same person for the past four days. When someone in the house said “she,” they paused. And whoever else was part of the conversation closed their eyes and drew a deep breath.

I get in the car and back out of the driveway. I can’t see a thing because my laundry is blocking the rear window. When I get to the store, a worker asks if he can help me find anything. “I don’t think so, thanks,” I say. I leave my sunglasses on as if I were trying to hide bruises that everyone already knows are there. I don’t know which aisle has what I’m looking for. I don’t know what what I’m looking for looks like. I do need help. I walk down the “Personal Care” aisle and search “hemorrhoid pillow” on my phone. I find a picture and crouch to scan the shelves. It doesn’t look how I expected. It’s an inflatable thing in a box.

I take it to the register and the cashier acts normal. I figure they’re told not to make a big deal out of stuff like this. Or they see it enough it doesn’t mean anything. No different than a candy bar. My mind is not in a place where it can be embarrassed.

I drive back and the father is watching baseball in the dark, dark living room. It’s a replay of a game from the day before. It’s two in the morning. She is still alive. 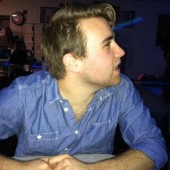 Dylan Pyles currently lives in Kansas City, MO. He recently completed an undergraduate degree at Truman State University, and plans to use his free time for writing and getting married, among other things.