Except a few weeks ago, guy walked into Ray’s — shaved head, bucktooth smile, blue guitar — just stood there waiting til everyone else was done, then stepped up onto the plywood and started at it. Name wasn’t on the list and didn’t want an introduction and I didn’t get his name after but he had to’ve come from out of town cause he didn’t look like anyone and I never seen him since.

Can’t forget that guitar, though, bright baby blue. Could say it was like the color the sky gets early April just after Easter before all the rain comes, that pure thin oxygen blue. My mom’d say it was the sky prettying up for resurrected Christ and the late April rains were God mad at all us here on Earth for killing his baby son. Except at the time I wasn’t thinking hocus pocus, just thought then it was the color of a workshirt I saw once at a Sears out by the highway.

I’m saying, this guitar was something different and this guy who I still never seen again, strapped it on, took out a pick, and just went to town on it. Banged out this savage tune to start that got everybody going. Amps at the sides of the stage weren’t even turned on and the sound of that thing filled the room so full two of the sad-sack drunks down the end of the bar looked up for the first time I ever seen. Started nodding and kicking their feet like this guy’s busting out jolts of electricity straight into their toenails.

Then number two got quiet, played off something soft and sweet, made me feel sick in the bottom part of my stomach. Made me remember that time in high school when I thought I’d found the one girl and I went to ask her out and she laughed right there in my face. Ray doesn’t believe in mirrors, but while he was playing my face got warm, felt red, just like that day I’d tried to forget, that day all the love drained out of my chest. He was taking these loud breaths on the inhale, using them for rhythm in places you’d tap a snare or a foot. Couldn’t help but breathe hard with him and before he was done my breath got long and cool and my head felt light and the bar felt new. These local guys that think they’re something, we usually cut them off after two songs. But wasn’t anyone in that place that could move then, much less say something, and so he kept on for one more.

It was a miracle, I’d say, because that third song was the one. He stared off at the back wall, like he didn’t know we were there. But the hands knew and the guitar knew and his savage hands on that wild blue guitar tore right through us, drunks and all. I don’t have a whole lot of words to describe it other than to say I’ve never been closer to thinking my mom was right — that right there on Ray’s stage with that guy with the Christ-blue guitar there was some kind of rising, like the light shined down, man, and we all sang amen and all of us in that bar that night got our souls saved without even having to pay cover. 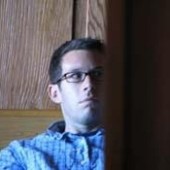 Born and raised in the square-mile suburbs of Detroit, Matthew Fogarty currently lives and writes in Columbia, where he is fiction editor of Yemassee. He also edits Cartagena, a literary journal. His fiction has appeared or is forthcoming in such journals as Passages North, FRiGG, Fourteen Hills, Midwestern Gothic, and Moon City Review.