Outside the Drug Store Rexall Drugs hasn’t even opened yet, but already everything has gone wrong. For one thing, there are two people working there today, not just one like Jimmy said. There’s the pharmacist plus a girl, probably a high school student working a summer job. And on top of that, a customer, an older woman, is waiting right outside the locked door, her husband in an idling powder blue Ford Focus parked out front. That means four people to deal with.

“These Mom and Pop drug stores are like taking candy from a baby. They got these Grandpa types doing everything, filling the prescriptions, Lotto tickets, the whole thing. No security. Not like the chains with their Plexiglas and the video cameras and a jacked-out security guard.” Jimmy had said this last night, his teeth chattering, right before he passed out in the front seat. Marnie was stretched out by herself in the back, a dirty sheet draped over her.

They’ve been living in his car for so long now, Marnie can’t quite remember when it started. Maybe the end of April, but that would make it three months. Is that possible? They’ve been all up and down the Rhode Island coastline, occasional late night trips to Fall River, Providence, once all the way out to Bridgeport. Running drugs for some guy in Central Falls that even Jimmy doesn’t know who he is really and won’t let Marnie meet, doesn’t want her to get that involved. Or at least that’s what he’s claimed. Like he claimed it would be simple to hold up this drug store. But like a lot of what Jimmy says, things are more complicated than they first appear to be. They traipse around all these wharves and beaches, named for long-ago Native American tribes or towns in England, and he makes everything sound like it’s going to be no big deal.

Her English grandmother used to point out the irony of that: Americans don’t want to be ruled by the British, go to all this trouble to overthrow the government, and then can’t think of what to call anything. Even New England, she would smile as she sipped one of her precious cups of PG Tips. They’d get out a road map at that point, spread it out on the kitchen table and she’d point to all the places that originated in England. She loved maps and sometimes when they went to the library, she’d get a big stack of road atlases, geographical dictionaries, encyclopedias and they’d invent expeditions they would take together. “When I win the lottery, we are going on a safari, just the two of us. No one else is invited,” her grandmother liked to say. “We need to see some lions. And some zebras.”

“How about a gorilla?” Even at six, Marnie’s taste tended towards gorillas.

“Oh, most definitely a gorilla. Yes, absolutely. We must see a gorilla.”

Marnie swallows. The car is hot and dirty. She wishes she could go across the street to that White Hen Pantry and get a cup of coffee. But that would involve a negotiation with Jimmy that she doesn’t have the energy for.

She looks over at him, his gray sunken eyes, dried out patchy skin the color of a spider web. He looks like a corpse when he’s asleep and sometimes in the morning when she wakes up first and sees him, she checks for a pulse. This is who she’s got everything pinned on.

The street is coming to life, waking itself up after a Saturday night. People going in and out of the White Hen Pantry, right there, across from them. More people to deal with.

“What?” his eyes scrunch up with irritation every time she opens her mouth.

“I don’t have a good feeling about this.”

She flinches when he slams his hand on the steering wheel.

“Always bringing your negative energy into everything! ‘Jimmy, I don’t have a good feeling about this. Jimmy, I’m scared. Jimmy this, Jimmy that!’ I’m so fucking sick of your paranoid, fucked-up shit, Marnie!”

She closes her eyes and rubs her temples. Her tongue feels swollen and extra large in her mouth. The canker sores hurt every time she chews or swallows.

What would happen if she grabbed her backpack, opened the passenger door and got out. She doesn’t have it in her, though. To actually leave Jimmy.

There are some moments. Moments of grace, almost. At the beginning of June, there was that trip out to Block Island, delivering to this musician, and they ended up staying overnight in his beach house. That was sweet, sleeping in an actual bed the whole night, listening to the waves crashing on the shore right outside their bedroom, white curtains blowing in the floor-to-ceiling windows, this crazy ass comfortable bed, like 400 thread count cotton sheets or whatever the fuck they are called, goose down pillows. Amazing coke, the kind that actually makes you feel good, and they did it all civilized like with dinner and wine and watching the sunset and listening to jazz. Just her and Jimmy and the musician and his girlfriend, like a couples weekend. Like other people, like all normal and everything.

Not waking up shaking in the back seat of a hot car yet again, sneaking into campgrounds at daybreak to take a shower, brush their teeth at a spigot. Hair falling out. Nose bleeds. Retching. Eating out of trashcans. Constantly hot and thirsty and dirty and needing a fix.

Jimmy is the worst thing that’s ever happened to her. Jimmy is a thing that happened. She’s pretty sure he fucked the musician’s girlfriend by the pool. The musician would have fucked her, if she could have mustered up the feeling for it.

Yesterday, Marnie swam at dawn in the saltwater pond in Burlingame, while that dad was fishing with his son in the rowboat nearby. She floated on her back listening as the father taught him how to put the worm on the hook without cutting his fingers, then how to cast. The fishing line whipped through the air before landing in the water, the silence that followed as they sat there together, waiting for something to happen, the sky exploding in pink and orange and even a hint of purple. Marnie could have stayed all day, there in the water, listening to them, the soft hum of a father’s loving voice. Then, after she’d had a shower, she saw them again, with what must have been the rest of their family, a mom and a little baby, all sitting together on a picnic table, eating their breakfast, a small campfire burning nearby and she’d had to rush away, wiping the tears off her face, people looking.

“What’s your fucking problem,” he’d said when she’d climbed into the front seat, gulping for air, in between sobs.

The older woman waiting for Rexall’s to open pulls out a piece of paper, maybe her prescription. Maybe it’s for something good—Percocets maybe. The man—her husband–calls out to her from his car.

“Can you get me some Tums?”

“We got that jug at home. Remember?”

“I told you not to order that orange juice. It doesn’t agree with you. I told you.”

“Can you just get the Tums, Rita. You’re going in anyway. What’s the difference?”

“The difference is I just bought a whole discounted jug of them from K-Mart. This place is kinda pricey.” She says the last part under her breath.

Then the door jingles open as the girl unlocks the door.

“Good morning,” the girl says. “Sorry to keep you waiting.”

The woman is asking where the Tums are as she follows the girl into the store.

“You said it was just one guy, an old guy. Who the fuck is that girl?”

“How the fuck should I know who that girl is. Would you fucking relax! Probably his granddaughter. Look, I got this, okay. She’s not gonna be a problem.” He lifts up his shirt, pulls out the gun tucked in between his underwear and his blue jeans and checks to make sure it’s fully loaded.

“I’m not doing it, I’m not going in there,” Marnie stares straight ahead. “This is too fucked up. You don’t know shit about holding up stores.”

He twists around and reaches for her, his hands on her throat. He’s up on his knees, shaking her back and forth.

“Stop it!” she’s screaming, trying to push him away.

“Would you shut the fuck up!” he’s whisper-yelling, knocking her head on the headrest.

“Stop it, stop it,” she starts to cry, his fingers tightening on her windpipe. “Please Jimmy!”

Finally, he releases her and lies back across the seat. They stay there for a moment, both still and quiet in their corners, breathing heavily, almost like they’ve just had sex.

Marnie wipes at her face and moves over into the driver’s seat, where Jimmy just was.  She turns the key in the ignition, slides the gears into drive and pulls out of the parking space, her foot on the brake, all ready to floor it.

An elbow juts out of the open window of the powder blue Ford Focus, the sounds of smooth jazz wafting out.  He taps his horn a few times.

“Shit in a basket,” she can hear him. “Woman, what is taking you so long?”

They are both in a holding pattern, Marnie and the man in the Ford Focus, a kind of limbo, waiting for the return of their partners.

It would be possible to lift her foot off the brake, a minor movement of the muscles in her toes. Instead, she adjusts the mirror and waits for Jimmy to come back. 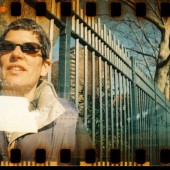 Susan Buttenwieser's fiction has been nominated for a Pushcart Prize and has appeared in Failbetter, Bound Off, Epiphany and other publications. She teaches creative writing in New York City public schools and in organizations for underserved populations including incarcerated women. She has been awarded several fiction fellowships from the Virginia Center for the Creative Arts.