Just before 2:00 a.m., just before the club closes, and I’m leaning against a car, my date leaning against me, waiting.  The Capital Records building is right there across the street, a stack of deli plates reaching up into a marine layer that’s been planning all day to creep in from the coast.  It’s not a good place to wait, but it’s not our car and God knows where Liam has snuck off to.  The last I saw,  he’d cornered this touchy, grinning girl while his date was in the bathroom.  He could be anywhere.  Doing anything.

A homeless guy comes weaving across the street, headed for us.  I don’t have my hands on any change; really, all I want to do is lean against the car and cool off from all the dancing and loud talking over the songs I didn’t want to dance to.  I’m wearing a brand new shirt and a pair of pants that only come out on weekends, only at night.  Who’d believe I don’t have a dollar?  So I peer into my wallet like it’s a darkened room and pull a buck from between two twenties.  “That’s all I got left, man.  There’s more ATM receipts in there than bills.”

“I hear that,” the bum says and takes the buck.

After he leaves and word gets out, another bum comes over to us.  “Let me get this one,” my date says, a brunette, a really nice girl whose name I’m trying not to remember since this is it, the last time I’ll see her because I’m not ready for a nice girl.

She’s excited and cuts off his pitch about the war and his veteran’s benefits running out.  She holds out the dollar like it’s an award, like the guy just won a Grammy or something.

The bum stares at the bill.  “A dollar?  What the fuck am I going to do with a dollar?” She looks like she might cry, her eyes welling up a little and sparkling like her skirt, so I throw an arm around her.  She drops her head to search through her little, leather purse for another dollar, or maybe a five, and the bum glances at me without moving his head.  He takes a deep breath and his eyes follow the silent exhale to the pavement, and I know it’s an apology.  He had to try it.  He knows I’ve been paying all night.  Knows she must have some money.  It would be stupid if he didn’t try.  And as a few more bucks come out I pull my date a little closer, firm but not intimate, and nod to him, let him know it’s okay and that, really, I’m no better. 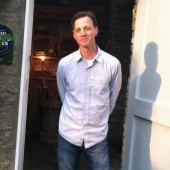 R Dean Johnson's essays and stories have appeared in, among others, Juked, Natural Bridge, New Orleans Review, Slice, and The Southern Review. He lives in Kentucky with his wife, the writer Julie Hensley, and is an Assistant Professor in the Brief-Residency MFA program at Eastern Kentucky University.