Caroline knows that when her belly growls, Larry knows that his knobs will be fingered, that he will grow hot inside, that a pepperoni pizza or crème brulèe, maybe even a late night meatloaf, will be produced with his help.  The growl is what Larry most loves to hear, Caroline thinks, and squats beside him close and intimate.  “Hear it?” she says.  Caroline fingers Larry’s racks, turns him on.  As she stuffs him full of Idaho potatoes, she sings to Larry.

Caroline eats her baked potatoes while watching the Monday Night Movie, just an awful movie.  Her potatoes are drenched with butter, and very delicious, but when she finishes eating, she feels sick.  She should not have eaten so much.  Why does this always happen?  Caroline doesn’t know.  She needs to put smaller portions on her plate.

Caroline needs help.  She isn’t obese, but still.  She decides to do something about it, so goes to Overeaters Anonymous.  “My name is Caroline,” Caroline says, “and I am an overeater.” She tells these people that she speaks to her oven, that she calls him Larry and that his knobs are shiny and black and that she doesn’t clean his glass because the burn marks around his corners give him character.

“Get rid of him at once,” the great large huge man says.  His name is Gary and Gary is from Vermont originally.  Gary says, “I have a truck and I’m sure that my son Kent will help us load the oven.  We can drive it to the landfill.”

“I would never dream of it,” Caroline says.

The enormous woman beside her puts a hand on Caroline’s arm.  “It’s okay, dear.”

“She said she wanted to stop overeating,” Gary says, looking to Evelyn, who is the leader of O.A.

Evelyn says, “Caroline, the fact that you talk to your oven is proof enough.  You’re going to have to kill this fantasy.  Please listen to us.  We are your friends and we care about you.”

Later that night, Caroline watches a movie on TV, just an awful movie.  She has not eaten a thing since dinner, and when her tummy growls, she cries out, “Did you hear that, Larry?”

Caroline turns her head to the side.  She lifts a hand to hold off the sound from the TV, and listens.  When Larry does not speak, she stomps to the kitchen, flips on the light, and stares at Larry’s burners.  “You heard it, didn’t you?”

“Say something,” Caroline says, but Larry is too good to say anything.  Larry has all the character, the spirals of his burners nicely textured, but mute.  Caroline would like to make Larry her lover, but one does not take an oven to bed.  She’d rather make love to Larry though than Gary.  It is their last night together.  Caroline undresses in the bathroom, showers, puts on lipstick, then makes love to the oven.

Next day Gary comes over with his son Kent.  Kent, a muscular young man with a crew cut, is on the football team at Ole Miss.  The young man’s thick neck reminds Caroline of the biscuits that would grow inside Larry, the plump rising of them, golden, and she would like to touch the young man’s neck, but she is not crazy.  Caroline is a normal thirty-five-year-old woman with a normal nine-to-five job.  She was married once.  Her husband left her for a thinner woman, but that is neither here nor there.

“Nice blouse,” Gary says, and Caroline notices afresh how large and huge and big Gary is.  Massive.  Gary is like the blob in the movie The Blob, but Caroline curtsies.  She is a genteel southern woman.  She says, “Why thank you, Gary.”

Out from the duplex comes Kent, pulling Larry along on the dolly, bouncing Larry down the steps.  Caroline just doesn’t want to see it.  Earlier, as Kent unhooked Larry from the wall, Caroline noticed some lipstick smears that she had neglected to wipe from Larry’s smooth steel body.  It was shameful.  She’d blushed and was feeling nauseous, so left the house.  Now she tries not to look at Larry at all—it’s true, only a strange person could feel emotion for an oven—but her head snaps Larry’s way and she just feels awful.  What kind of cruel person would do such a thing?  It’s like looking the other way while your children are sold into lives of slavery.

“You’re doing the right thing,” Gary says, and he says, “I’ll keep you company while Kent does the honors.  When Kent is done he’ll come back for me.”

Caroline looks at Gary standing in the yard in the full sun and wishes the ground would open up and swallow him.  “No, please, I’ve got a ton of paperwork to do,” Caroline says.

“Well, if you start to overeat, you know who to call,” Gary says, and leaves with Kent.  Caroline watches them drive off, Larry in the back of the truck.

Caroline goes inside and pretends to feel fine, but she is thirsty.  When she enters the kitchen for a glass of water, there is the empty space where Larry once was.  She breaks into tears.  She runs to the bathroom, holds her face over the commode, and heaves, but nothing comes.  She sniffles.  Her tears fall into the water, breaking her reflection.  The porcelain is very kind, she notices.  “I am a miserable woman,” she says, and hears a little sound down deep in the pipes.  She holds her breath and listens. 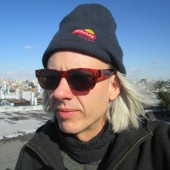 John Oliver Hodges lives in New York. An adventurer since birth, he seeks out uncomfortable situations in which his life is put in danger. His works in writing and photography have appeared widely. His novella, War of the Crazies, was released this year from Main Street Rag.