Who am I writing this to?  I don’t know, but I hope you’re a friend.  As a matter of fact I’m going to do away with semantics and address you as such.  Hello, Friend.  That’s nice.  I could use a friend right now.

How did we get here?  That should be an easy enough question to answer, but lately I’ve been having some trouble with labels.  I don’t care for them.  Labels.  I was an actor by trade, but I have long since retired from that profession.  It’s funny how we can still wear the label – the identity of a thing, a job, an occupation.  Even years after the world has stopped identifying you as such.  I don’t know why but I’ve been thinking about that a lot lately.  Am I an actor still?  I worked in an office, too.  Am I that?  I have to think we’re more than our jobs.  I am what?  A husband?  A spouse?  Boyfriend?  It’s 1978 and they tell me the world has changed.  I don’t see it yet.

Right now all I see are wires and tubes and my lover, Ben, tucked into his reclining bed with the hospital corners.  Lover.  Is that what I am?  Is that what he is?  Is that enough of a label for the world to recognize us and not be afraid?  Can you accurately describe what we’ve been through, what we’ve been to each other what we’re still going through with the term ‘lover?’  I’m sorry.  You should know I have a tendency to go off on these little tangents.

I am sitting in a chair that may or may not have been used as some medieval torture device in room 628 of Michael Reese Hospital on the south side of Chicago.  It’s nondenominational, though it is known far and wide that Chicago Jews get the best medical care here.  I believe that the building I’m in right now is referred to as “Main Reese.”  No one has actually told me this but I have heard the nursing staff ordering tests for Ben and referencing the building as such.  Specifically, they refer to the “Pansy on Six—Main Reese.”

They’re talking of Ben of course.  But I’ve heard tell that the world has changed.  I brought them black and white cookies from Manny’s yesterday and scotch-taped a card to the box reading:  “Happy Chanukah from the OTHER pansy six-main Reese.”  They avert their eyes now.  Jews are masters of guilt.  You don’t have to be a mother to wield its power either.  It didn’t stop them from eating the little separatist confections, though.

I feel it’s best to put the Jewish-thing right out there in these kinds of situations.  They know with whom they are dealing now.  As if they didn’t before.   I had a copy of the power of attorney laminated and posted on the door for all to see, printed on blood red paper so they’d have no choice.  We’re a very factual people, you see, very litigious.  That may not be the right word.  I don’t have a dictionary at hand.  Sorry.  I know the word to mean argumentative and not easily swayed without facts.  Not that I’m a particularly good Jew.  And Ben was not Jewish.  He was a lapsed Catholic.  It was a match made in heaven: a lapsed Catholic and a bad Jew.  That’s how bad I am- I just referenced heaven.  Jews don’t believe in heaven.  Or hell.  We believe that you make your own heaven or hell on earth.  Oh boy, do we.

The nursing staff doesn’t know Ben’s not Jewish.  I’ve even put a menorah in the window.  It’s electric.  Again, bad Jew, I know.  But I’ve seen the darned things lining the windows up and down the Park Building across the street from our apartment in Niles.   It’s a place for Jewish seniors.  Six floors of little orange lights illuminating little Jewish faces and the whole of Golf Road for at least a block.  Thank goodness the bedroom in our apartment is on the other side of the building or we’d get no sleep.  Not that I’ve slept in our apartment for several weeks now.  Once, a tiny slip of a woman I chatted with in the check out line at Manny’s told me that she would count the lighted menorahs every evening in the windows of the Park to see who was still alive.  Not a suite in the entire building, she told me, had more than one occupant.  An entire building of widows.  No one is there to plug in the menorah if you aren’t, I suppose.

I have a little porcelain Xmas tree in my pocket.  Another example of bad Jewiness.  I like Xmas.  I do.  People – total strangers – say hello to you right there on the street.  The lights of Michigan Avenue are magical this time of year.  Right now, I can here the sounds of carolers, though, just down the hall in the terminal ward.  They’re singing “Silent Night”…in the original German.  They sound very rehearsed.  I’ve closed the door and flipped the latch.  These old hospitals were built during the time of modesty when it was important to relegate the sick to a single place but you were still allowed to die behind a locked door.  Maybe they will skip us.  I hope they will skip us.  They tell me they world has changed.  I hope so but I can ONLY hope.  I hope they skip us because if they don’t, I’ll have to end this little missive and I’m not finished saying what I want you to know.  Besides, the last thing a Jew needs to hear is “Silent Night” in German.  They’re getting closer.  Maybe they’ll think he’s just asleep.  No.  The bellows aren’t moving.  They’ll notice the plug on the floor.  I’m sure they’re not stupid.  They’ll call for the nurse and it will be over.  Before, though, you should know I did it out of love, Friend.  Forty-six years we’ve been together and I’ll never hear that…chortle I guess you’d call it, again.  I’ve unplugged the menorah, so the world will know before they do. 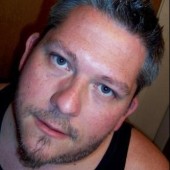 G. William Zorn is a playwright, actor and director currently finishing up his Ph.D. at Western Michigan University, where he teaches playwriting, LGBT drama and creative writing. In 2010, he won the Mark Twain Prize for Comedy Playwriting from the John F. Kennedy Center in Washington, D.C. He'll be needing a job soon, so feel free to hire him.