They used to listen to records in a room with red carpet. She thought he wanted her when he’d talk about the future. She overlooked that he always said, “I.” He was self-conscious when she would put her nose in his armpit in bed. Then he would ask to drive her someplace in her car because his was not stick-shift and how he loved stick-shift. Then she thought he was in love again.

In a grassy hick parking lot, the kind that is not a parking lot any other day except that one, that is why it is so grassy, she was walking with a six-pack. If the red carpet had been her bleeding out into a small jar he could uncap once in a while when he was lonely, then the dirt and grass were that desert he always talked about with “I.” But they could still share the beer.

They were both alone in the kind of place where people ran in packs. They didn’t know if their aloneness was strength or devastation. They became a pack again, sat slump-spined on a split-rail fence in the middle of all that grass. She didn’t look into his eyes because she didn’t want to cry or take her clothes off. She knew he wouldn’t ask, but that she would offer. He had cut his hair. She wished she had been there to weave all the fallen pieces into a blanket. The blanket would have been small and damp as patience because his hair had never reached his shoulders. But it would have been strawberry blond: a rare hair blanket color.

Pack mentality overtook them in this bullfight of strangers, even though he might have treated her like one if they were back in their own town. They shared what they had: alcohol, intense lion’s breath humidity. Then she looked at his sandcastle face. She wished to finger the turrets and moats of his profile, plunge her hands in cool recesses.  She had before only concentrated on his ankles, slender and lovely as doves’ feathers. He was a bigger man, but his legs had been beautiful to watch if you had always been the one walking behind him. Then he looked away. Small folds accordioned around her heart, her lungs, her tongue. She did not breathe, could not for the organs folding, bellows’ groans. His gazing away took a pair of scissors, paper-dolled the fleshy tissues all.  She hoped he had at least cut well, cleanly. That way, when she unfolded them later she’d find something beautiful; the years would not be a total loss. 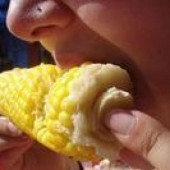 Lauren Tamraz likes her tacos and pit bulls with good bite. Her work appears in >kill author, Metazen, Fix it Broken, Housefire, Thunderclap, Chronogram and others. Her novella, Broken Ocean, is forthcoming from Housefire Books. She lives in NY's mountainous Hudson Valley where she edits awostingalchemy.com.