Francis met Wanda at the roulette table, then four hours later they walked away from the poker table with enough money to royally treat themselves at the McDonald’s Foodcourt.

They carried two piled trays of food to a corner table, and she slipped out of her shoes, so he pulled out of his boots, and then they grazed, indiscriminately.  At first it seemed accidental on Wanda’s part, dipping her fries into his milkshake, dipping her burger into his bank of ketchup, but then she opened his burger and stole his pickles, then offered him a sip of her Orange Crush, and before he knew it, they were feeding each other.

“Woo!”  Wanda finally leaned away from the table.  She rubbed her belly, then with a glance at her watch and a rub of her foot along his calf, she smooched the air.  “All we need now is to go to your truck, I do believe, you know?  Should be dark enough, if you ready.  I’m ready, but is you ready?”

Francis was ready to dive in once he’d unlocked the camper door and flung open the gate, but the bedding was covered with books.  Wanda whistled a tune as he hurriedly stacked them aside.

“Okay, it’s ready,” he said, hunched on his knees, watching Wanda crawl into the truck, the bed lowering beneath her.

Once he’d crawled in, he closed the gate and camper door.  “The sun might be going down, but it’s going to get hot in here,” he said.  He turned around and saw she’d pulled off her Bally’s t-shirt.  With her arms folded behind her head, she displayed a body not as large as he’d expected.  Her bra-held breasts were what were enormous, standing erect through an architectural principle beyond his understanding.  The ivory-colored brassiere was a contraption of straps and buckles and arches, floor joists and collar beams, interwoven fabrics—a feat of restraint and support that would make any Parisian weep with awe.

“Come here and undo me,” she said.

He reached out with timid fingers and nervously unbuckled the most visible straps, which wrapped garter-like around her breasts, but they released only the tension and the beams connecting the breasts unhooked and everywhere spilled mammaries, mammaries.  She giggled and he tried elsewhere but he was losing light and what he tried also failed.  The day finally succumbed, and it was then that he found the right straps.  They weren’t in front or in back but under her arms.  He’d found them, they were as wide as the length of his hand, but where in the world were the buckles?

Feverish with sweat and fatigue, and intoxicated by her smell of baby powder, he decided he’d pull on one of the straps as though he were trying to crank a rusted outboard motor, with his foot set firmly in her arm pit.  And what he’d heard was pure music:  the bacon-frying sound of Velcro.   And not a tiny adhesive strip either.  It could’ve served double as a pot holder.  Wanda was at last undone.  But only halfway.  But not for long.

He ran his hand along her belly toward the elastic band of her pants, but she quickly caught his hand and led it back to her breasts.

“Love them,” she whispered.

He caressed and suckled them, and she began thrusting her hips into the air.

Determined not to relent no matter what she might say, he worked her nipple back into his mouth.  She clutched his head and practically submerged his face inside her heart.  Pounding the truck’s bed with her heels, she screamed out, then whispered, “Oh, baby Jesus.”  She screamed again, and catching her breath she murmured, “Oh, praise you, Jesus, baby Jesus.”  Her arms collapsed at her sides, and she heaved a long-winded sigh.  “Now, it’s your turn,” she said.

While she unzipped his jeans, he removed his shirt and tried again to reach inside her pants.

“Naw, now,” she said, leading his hand by the wrist to a solemn resting place on his chest.  “Disregard that,” she said.

She began caressing him.  Francis thought he’d waited long enough, thought she’d at least let him rub her through her pants.  But as soon as his fingers touched her, she slapped him away.

“What?”  She stopped touching him.  “Never heard of such a thing.  You something else, Francis.”  She returned her hands between his legs.  “This’ll take us both concentrating, so hush up now.”

Now, he was a catfish, his member in the water of her mouth, throbbing and darting.  How did he get here?  It was crazy.  She’d caught him, with both hands, he was coming, but how good God did he really arrive?

After a smack of her lips, she reclined beside him and stroked his hair.

“Was that all right for you?” he asked.

“Sure,” she said.  “I don’t mind quick, and it went down just like how your hair feel.  Smooth as silk.”

“Sure do.”  She laid her cheek against his chest.  “You ever hear of Platonic love?”

“That’s what we done now, you and me.  Made Platonic love.”

Francis turned on his side to hold her.  “I believe you,” he said.

“That’s right,” she said.  He felt the words on his face.

“You know, I’ve always thought, Wanda, that all love is Platonic.”

“Yeah.  Any way you make a showing of that love is arbitrary.  Even if you choose not to make a showing.  I might not call someone I love.  Or I might.  I might go to bed with her.  And then again, I might not.  Now, you tell me how what I do or don’t do changes how I feel?”

“But what if you was to go to bed with somebody who love you but who you don’t love?  What if, let’s say, that a man showing his love for me makes him love me that much more?  And let’s say I done that, I allowed him the chance to show, but I was to never in no way come close to even liking the stupid bastard?  What’s that, when what you do or don’t do change how the other person feel?  That’s what I’m getting at, Francis.  Just what do you call that?”

He pondered a moment, staring at a distant lamp in the parking lot through the camper’s rear window, her wordless breath brushing his face.

“Wanda, what would you call it?”

“What I been calling it.  Evil-doing.”

A car motor started nearby.  The driver pumped the accelerator and sped away.

“Nobody warms their engines anymore,” said Francis.  “You ever notice?  Idle lives galore but try and find an idle car.  Crazy.”

She kissed his chest, then nestled her head there, her hair smelling like gardenias.

“I met you on the wrong end of my vacation,” she said.  “My baby boy’s expecting me tonight and I got to work at the P.O. first thing in the morning.  I gotta get dressed now, you know?”

“Oh, you evil-doer!”  She laughed.  “Both us!”  She let out a breath that hummed with peace.  “If you want to touch it once right quick, I guess it won’t hurt.”  She raised her head, blocking the dot of light through the window.  He wondered if she could see him.  “Still want to?”

“Only if it’s right quick,” she said.  “And if you promise to wash your hand directly.”

She unzipped her pants and pushed them down.  “Here,” she said and guided his hand until he felt what felt to him like grass.

“Is that grass?” he asked, twisting hairs around a finger.

Francis leaned toward her and aiming for her mouth he kissed her nose.

“Don’t rub your eye with that hand.  You hear me?”

“And don’t stick it in your mouth neither,” she said, pulling up her pants.  “Nothing fouler than a spotting woman.”

“You promised.  You promised me, so I don’t want to hear another word about it,” she said.  “Now, where in God’s creation’s my bra?”

Once they were dressed, Francis pushed open the glass camper door and the tailgate and jumped to the ground to help Wanda.

They hugged each other before she sat down in her car, a honey-colored Buick Park Avenue, and closed her door.  She started the engine, then pressed a button that lowered the window.

“I want you to wash that hand good with soap and warm water.”

He nodded and leaned in and kissed her.

She shrugged with a smile.  “Up to the good Lord Himself.”

He watched her drive out of the parking lot, following the taillights until they were lost among others on the street, then turned and ambled toward Bally’s to wash his hand—holding it up in front of him as though he were carrying something fragile only he could see. 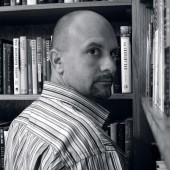 Sidney Thompson is the author of the short story collection, Sideshow. His fiction, twice nominated for the Pushcart Prize, has appeared or is forthcoming in 2 Bridges Review, BlazeVOX, The Carolina Quarterly, Clapboard House, Cleaver Magazine, The Cortland Review, Danse Macabre, Flash: The International Short-Short Story Magazine, Ginosko Literary Journal, Grey Sparrow Journal, NANO Fiction, Ostrich Review, Prick of the Spindle, The Southern Review, storySouth, and elsewhere. He is the Assistant Fiction Editor for the American Literary Review and teaches at Texas Christian University.