Every night, she fought me on the eye patch.

“Just half an hour. Just one TV show.”

It hooked over the left side of her glasses, but she’d lift it up to peek, or lift her chin to look under it.

We put a googly eye sticker on the patch and looked in the mirror. She laughed but she took the patch off. I made a deal with her: I would take off my own glasses if she would wear the patch. I’d offer my poor vision in exchange for her sacrifice.

She liked this game. She took my glasses and walked away.

“What can you see?” she asked from the kitchen.

I let her hold my hand and we went for a walk down the street, her with her patch, me without glasses. She kept asking what I saw, flowers and rocks and dried-up puddles. Can you see that, Mommy? Can you see this? As if I were seeing new things I’d never seen before. But I had seen all these things. Held most of them in my hand. A crumpled cigarette box; some random piece of litter that I could either pick up or kick away. She pointed them all out to me and I had to get very close to understand what each object was. Sometimes I would know from the smell before I was close enough to see or touch it. The best thing to touch, always, was my daughter’s plump, bouncing hand. I lifted it to my lips and kissed the dimpled knuckles.

We walked past the Murphy house, one and a half streets over, and I saw something so big in their backyard that I could see it without my glasses. The arc of it hovered at the height of the roof and I might have thought it was just a shadow from the house or the top of their massive willow tree, except that it hummed, or the air around it hummed, like a soft engine. I’d never seen it there before. I stepped closer, through their yard, leading my daughter in so that we could look back there and try to figure out what it was. My glasses were at home. I hadn’t brought them and I led my daughter back, into the blur of the Murphy backyard, where I’d never gone and never been invited. I felt lured in by the great dark humming shadow, and I couldn’t tell what it was except that it was big and dark. I saw its outline, elliptical and unsteady like jelly, filled in blue-black and shiny, like a giant sea creature delivered on land. It was maybe a kiddie pool levitating on its side, or a trampoline lifted by the wind, or a half-deflated zeppelin, bruised and discarded. The unmowed grass tickled my ankles as I stared at the blurry black mass, trying to get it to focus before my eyes. Crickets whirred and I squeezed my daughter’s hand as we took small steps toward the mysterious object. I heard a door creak and slam, and then one of the old Murphy sisters called from the deck: “Who is that? What are you two doing back there?”

As we got closer, the more it looked like nothing. A big, black clump of nothing; a charred black hole where a fire might have been: last night, last week, last time the atmosphere burned up. The sky glowed bluer around the dark shape, as if the proximity to darkness made the blue stand out in contrast. The darkness repelled the blue. And as the dark pushed the blue out, the dark pushed itself out too, and I felt it approaching me and my daughter. It swirled and hummed and grew rounder, maybe trying to look friendly, or trying to look like it would take us in, but this seemed like a very bad idea. I couldn’t see into it. Or there was nothing to see. I did not want to be embraced by this darkness.

My daughter, however, reached her soft, plump arm into it and wiggled it around.

“Can you see this, Mommy?” she asked. Her arm was in and I couldn’t see anything past her shoulder. The air around us felt thin and hard to breathe, as though the hole was sucking it all in. The humming stopped, or my heart was beating too loudly for me to hear anything else.

“Get your arm out of there, sweetheart,” I said. My voice lay on the air where it had exited my lips, not moving.

I looked around for the old woman who had stepped outside, one of the sisters, but I couldn’t see people without my glasses on. I could only see directly in front of my eyes. I reached out to pull my daughter away from the hole. It was easy: like it was nothing there in front of us, casting its shadow over us, enveloping her whole arm. I put her head to my chest, but before she let me lead her away, she stuck her feet to the ground, and yanked the eye patch off and chucked it into the middle of the darkness. 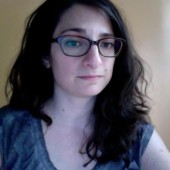 Lena Bertone's writing has appeared in wigleaf, Caketrain, PANK, matchbook, apt, and other magazines. Her novel, La Revengista, will be published by Aqueous Books in 2015, and she has a chapbook of short fiction coming from Origami Zoo Press in 2014.