Only when the baby was in her playpen did I feel safe.  She looked so perfect in there, from a distance, and when she cried the netting and the bar were strong, keeping her safe. I loved that feeling, of nothing for me to do, of us both being safe. Perhaps I was a princess in a past life; or a prisoner. I was a Disney princess who was also a prisoner, of course. Waiting. I fed her, of course. Of course; what do you think I am? First a bottle and then scraps, nicely mashed, of whatever I ate.

When she got tall enough she stepped over the bar and I had to renovate. I’m not good with carpentry; who would have thought to teach a princess to hold a hammer? Anyway, she was so accustomed to her pen that it was not difficult to convince her that it was home, even with the ugly boards I attached for extra height. Elsewhere, wars were being fought, but she was safe.

I can remember the exact day she stopped being beautiful. There was a red-orange light outside, unusually saturated, maybe it was sunset or maybe it was some other trick light plays on the eye. She was my height now and could look me in the eye, though she refused. Her mouth had, over time, changed from resembling a small, ripe fruit to something about to fall and hurt. I was, despite her ugliness, overcome with the urge to kiss her. My daughter. Oh my God. And when I did, she disappeared, the way nightmares do, and beautiful dreams, too, leaving their stain, sacred and awful.

The cute polar bear cards come in the mail and make me a feel a little bit obligated to contribute to the organizations that send them. Not that I don’t want to help the bears. I certainly do; who wouldn’t? But to believe my small check can make a difference; this is a stretch.

I place the cards on my desk and open one of them–so clean, blank and inviting. Nice, sturdy, white paper. But who sends cards anymore? And who would I send them to? Still, I keep them around to look at, and perhaps for the belated birthday or thank you. They will, I know, last many years. If not forever.

Back then, when everyone was young, I’d find tiny underwear, socks and crusts of bread in the napkin drawer and other unexpected places. Familiar objects would often speak strangely–chink, thud, clink, thud–from the dryer, until I retrieved a stone, a Lego piece, a hair clip, pennies. I began a small collection, knowing it would increase in value with time. In fact, I was pretty sure I’d be willing to pay to see these things someday.

When I see the yellow Lego mini figure and the doll’s shoe, I am pretty sure this is it. When I see the turtle, a painted stone with pasted on purple legs made of felt, I know. The small heap declares its inevitability on the concrete. But it turns out I don’t have enough money. The guard says I can look, but not touch. Touching costs more.

The light filtering through my cairn is the same as how I remember it coming through my boy’s window. He sits in the middle of his room, surrounded by the many colorful pieces. His small fingers manipulate the tiny people with square bodies and cylindrical heads. He loved most, I think, the way they fit perfectly into the objects for which they’d been intended. They snapped on, just like that. They worked. This is the policeman, he tells me, and this is the dad. He snaps the policeman into his car, but isn’t sure what to do with Dad. Maple leaf shadows move on his wall. Outside, the late afternoon light is coming through the trees, a magical light. In the next room his sister sings a song about a mermaid who wants to be human.

We lived in the woods, then, and childhood seemed long. We made small rock cairns along the deer trail and my son called them bed-in-breakfasts. We had picnics, before electronics, before weapons. Squirrels and an occasional deer sniffed the ground, searching.

The light leaves my pile, suddenly, as though it had been electric. Time is up. A green, mechanized shovel comes and scoops up the cairn. My son would have loved this gizmo that right now is breaking my heart.

The hardest thing was not stumbling from my bed to the bathroom and, at the beginning, missing the toilet about every other time. Sometimes I’d miss it all together so a puddle would form at my feet, sometimes a little, so the spray would bounce off the rim and shower different parts of me depending on the angle. The way light used to, off objects, refract in countless ways. No. It wasn’t the pee, though that was not pleasant and was humiliating. The hardest thing was knowing, almost as soon as I’d lost it, that I had not used my sight very well. Not very well at all. This broke my heart. This made me rage at my lack of wisdom and gratitude.

My old cat still sits on the deck hour by hour in deep meditation. Occasionally I used to look at her, even pet her; the thought would often run through my mind that this could be her last day, but who can dwell on such a thought for long? She was, after all, just sitting there. What was I supposed to do? Move on to the next thing. Always. The sunflowers tall in my garden when most everything had gone to seed, on dark days I thought they’d kill me with their bright faces; I let them cheer me for a moment and that was it. The deep yellow of the candid petals; I can feel the color now draped over my heart, like a flag over a coffin. Not to mention the faces of my children. It’s not as though I don’t have them memorized, but there were many times I could have looked longer and more kindly and didn’t. If love and the soul are reflected in the eyes, now what? I should have given more.

I can feel pity in the room like a stiff drink, like something or someone, some kind of temptation you know is trouble.

I can blame it on the dog, though it was me who decided when he could run free. Always, I decided. He charged a young crow and had it long enough to break its wing. I chased him, got him to leave the bird, but not until it was too late. The doomed crow sat upon a rock. Two large crows, the parents I assume, circled and swooped and dove at me, each of them helping themselves to an eye.

I lost the silvery clouds stretched thin that morning over the bay. I lost the bay, also silvery, but darker. I lost the seaweed, the brown and ochre draping the granite and schist. And now, even the pain is subsiding … my last wild thing, last straight shot of light.

It’s been long enough so that I can think this: I hope Mama and Papa crow at least enjoyed my eyes; that they were a precisely sought after treat and not just collateral damage to a violent, if protective, impulse. My dog, who will always stay small as a baby, sleeps in my lap; he will stay here until one of us has to go. 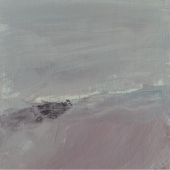 Caroline Sulzer's work has been published in American Letters and Commentary, Calyx, and other journals. She has received fellowships from the Vermont Studio Center and the Millay Colony for the Arts.